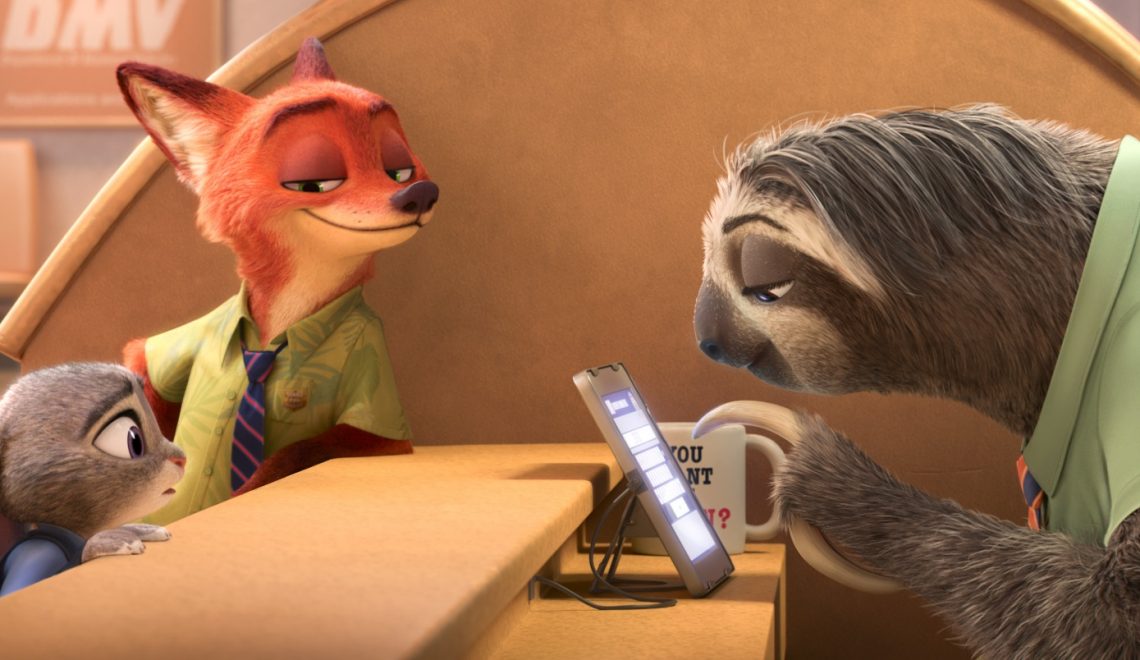 Zootopia is quite simply dazzling. It’s a film with incredible visuals, terrific characters, and, for an Visually this film is almost hallucinatory. Disney animated films have a long reputation for their amazing visuals but Zootopia takes it to another level altogether. The city of Zootopia is one in which every animal imaginable lives in peace and harmony. One distinction that is made is that predators and prey are able to live peacefully together in a modern looking cityscape. But to achieve that harmony Zootopia is divided into numerous very different environments to suit the animals’ particular biological needs. Tundra Town is right next to Sahara Square with a rain forest area adjoining them all supported by Zootopia’s amazing technological infrastructure. We see vast networks of pipes bringing in the water for the rain forest along with snow blowers for the arctic environments among others. There is also an entire miniature city within a city for the smaller animals. We see things like trains with multiple different sized doors to support large animals like elephants and giraffes ranging down to the little guys like mice. The thought that went into the technical aspects of making something like this look convincing is simply mind boggling. The entire visual realization of Zootopia is quite beautiful. As always with Disney animation the characters are wonderfully realized. From the irrepressible optimism of Ginnifer Goodwin’s bunny police officer judy Hopps to the Idis Elba’s tough yet comical Chief Bogo, the voice actors are uniformly fantastic. Office Judy Hopps’s belief that anyone can be anything in Zootopia is the grand theme of the film. There are however,  a lot of underlying issues related to this that the film touches on such as the limitations that each of us has and that because of that perhaps we can’t actually be anything we want to be. Surprisingly the film also touches on such issues as biological imperatives between predators and prey, racial profiling, and various kinds of discrimination that are very active in our present day culture. That all this is being done in an animated film that might seem aimed at kids might seem a bit subversive but it’s all handled with remarkable grace and sensitivity. At its’ heart Zootopia is a mystery. After graduating from the Police Academy Judy gets her wished for assignment to the big city. But everything Judy imagined doesn’t come true. She’s assigned to parking meter duty by Chief Bogo who obviously sees no value or has any faith in the abilities of his new bunny recruit. Relentlessly optimistic Judy sets off to write the most tickets in meter maid history and stumbles upon fox con man Nick Wilde (Jason Bateman) and a clue in the mystery of a serious case of disappearing mammals that ends up shaking the very foundations of Zootopia. Zootopia is terrific entertainment for everyone. We took the grandkids who loved the characters, the jokes and the story while we were surprised and enthralled by the incredible visuals and the uplifting and surprisingly adult themes. This has got to be one of Disney’s finest animated films and that’s a very high standard indeed.