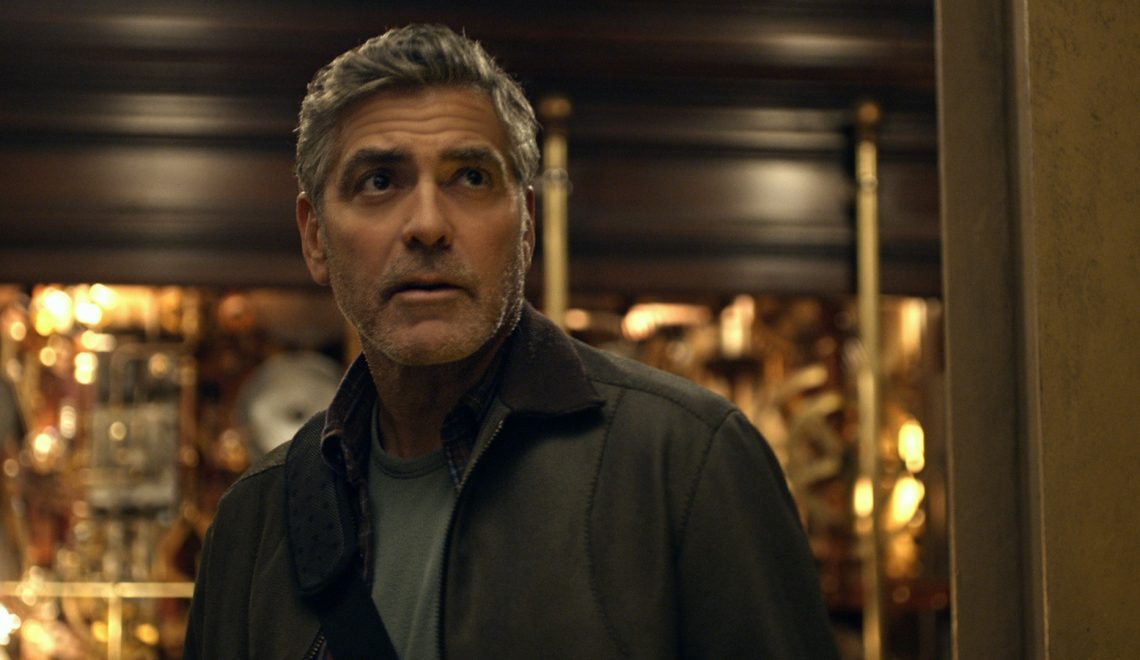 You wanted to see Tomorrowland -Here it comes!

Walt Disney once said, ““Tomorrow can be a wonderful age. Our scientists today are opening the doors of the Space Age to achievements that will benefit our children and generations to come. The Tomorrowland attractions have been designed to give you an opportunity to participate in adventures that are a living blueprint of our future.”

Never has this been more evident than with the new “Tomorrowland” movie preview and exhibit, which is currently showing for a limited time in both Disneyland as well as Walt Disney World. This must-see event marks the first time that a sneak peek has been not only offered in both parks simultaneously but the first time Walt Disney Studios has teamed up with both parks to showcase an upcoming Disney film with footage and an in-depth look at the making of the motion picture. Sure to spark the imagination and curiosity of all, the special exhibit details the process of bringing director Brad Bird’s vision to life and gives a special glimpse of how the filmmakers created the world of Tomorrowland, along with archival images of iconic Disneyland attractions featured in the film. In the movie, the premise that the futuristic city of Tomorrowland could actually exist pays homage to Walt Disney’s vision for both Tomorrowland at Disneyland Resort and Epcot at Walt Disney World Resort where ever-evolving technologies are showcased along with ideas to make the world a better place for all. Last week I was lucky enough to experience this very special first of its kind sneak peek when I visited the Happiest Place on Earth, the Disneyland® Resort. Located right in the heart of Tomorrrowland in the Tomorrowland Theater, park guests like myself are treated to an exclusive look at scenes from the film, complete with special in-theater effects.The magic doesn’t stop with just the twelve-minute movie preview. To further bring the “Tomorrowland” experience to life, I, along with other excited fans, were able to take the time to explore an all-new exhibit in the Starcade. Always one for anything Disney, but especially Disney history, and history in the making, being able to walk through the exhibit and have a first hand view of costumes, original props and production artwork, storyboards and the visions that bring Disney’s “Tomorrowland” movie to life not only captured my imagination but gave me the chance to transport myself into the heart and the soul of the film and wonder “What if ….”

On May 22, 2015, from Disney comes two-time Oscar® winner Brad Bird’s riveting, mystery adventure TOMORROWLAND, starring Academy Award® winner George Clooney. Bound by a shared destiny, former boy-genius Frank (Clooney), jaded by disillusionment, and Casey (Britt Robertson), a bright, optimistic teen bursting with scientific curiosity, embark on a danger-filled mission to unearth the secrets of an enigmatic place somewhere in time and space known only as Tomorrowland. What they must do there changes the world—and them—forever. Featuring a screenplay by Lost writer and co-creator Damon Lindelof and Brad Bird, from a story by Lindelof & Bird & Jeff Jensen,“Tomorrowland “promises to take you on a thrill ride of nonstop adventures through new dimensions that have only been dreamed of-now the only question left is-would you go? Commenting on the exclusive “Tomorrowland” sneak peek event, Brad Bird, the film’s two-time Oscar® winning director, said, “We are excited that park guests will be the first to get an extended look at “Tomorrowland” in the part of Disneyland that inspired the film. Tomorrowland is the one section of the park that Walt Disney himself designed to be tied inexorably to constant change. After all, the future is always in motion, continually shifting as humankind’s choices of the present remake the world ahead of us. “Tomorrowland” is a state of mind. My hope is that the exhibit will convey some of the magic that went into bringing this land… and this movie, to life.” This incredible exhibit is only there for a short time so be sure not to miss it. Once upon a time in October of 1955, I first entered a place, a magical place where nothing was impossible. A place where anything you could imagine was built, a place where you actually felt that you could change the world. Now, almost sixty years later, Disneyland has continued to be a most magical place where all your dreams can and do come true- a place where “laughter is timeless, imagination has no age and dreams are forever.” Sixty years have passed since I first experienced all the magic that makes up the Happiest Place on Earth but the party is just getting started as the Disneyland Resort gets ready to dazzle. To celebrate the 60th anniversary of the Happiest Place on Earth, Disneyland is inviting us all to join them for #Disneyland60 the Disneyland Resort Diamond Celebration.

The Diamond Celebration will light up the Disneyland Resort beginning with a dazzling 24-hour event May 22-23 as guests enjoy the thrilling premieres of three, new nighttime spectaculars: the glittering “Paint the Night” parade and the groundbreaking “Disneyland Forever” fireworks show at Disneyland Park, plus the new presentation, “World of Color – Celebrate! The Wonderful World of Walt Disney,” at Disney California Adventure Park. The revelry will include dancing and special character encounters at locations in Disneyland and Disney California Adventure parks, along with enchanting Diamond décor throughout the resort and the exciting shows and attractions that bring guests back year after year. Both Disneyland and Disney California Adventure will sparkle with Disneyland Resort Diamond Celebration decor and festive banners. The crown jewels of each of the parks are Carthay Circle Theatre in Disney California Adventure and Sleeping Beauty Castle at Disneyland. Work has already been done on Sleeping Beauty Castle for its magical transformation, and it now sparkles with thousands upon thousands of diamonds and crystals — some as large as 24 inches — that were placed by hand. By day, it sparkles in the sunlight. At night, it will be lit up by thousands of twinkling lights.

The Disneyland® Resort invites guests of all ages to be dazzled throughout the year for the Disneyland Diamond Celebration celebrating 60 years of magic at a resort that remains forever young.

May 22 is shaping up to indeed be the most magical days ever when “Tomorrowland” opens in theaters nationwide and the Disneyland Diamond Celebration gets ready to dazzle. The future and the party is waiting for you!

Want to hear more about “Tomorrowland” and the #TomorrowlandEvent? Stay tuned right here! ® my interview with the incredible Britt Robertson, who portrays optimistic dreamer Casey.

I have been invited by Disney to cover the Tomorrowland Event. All expenses have been paid for by Disney but all opinions my own