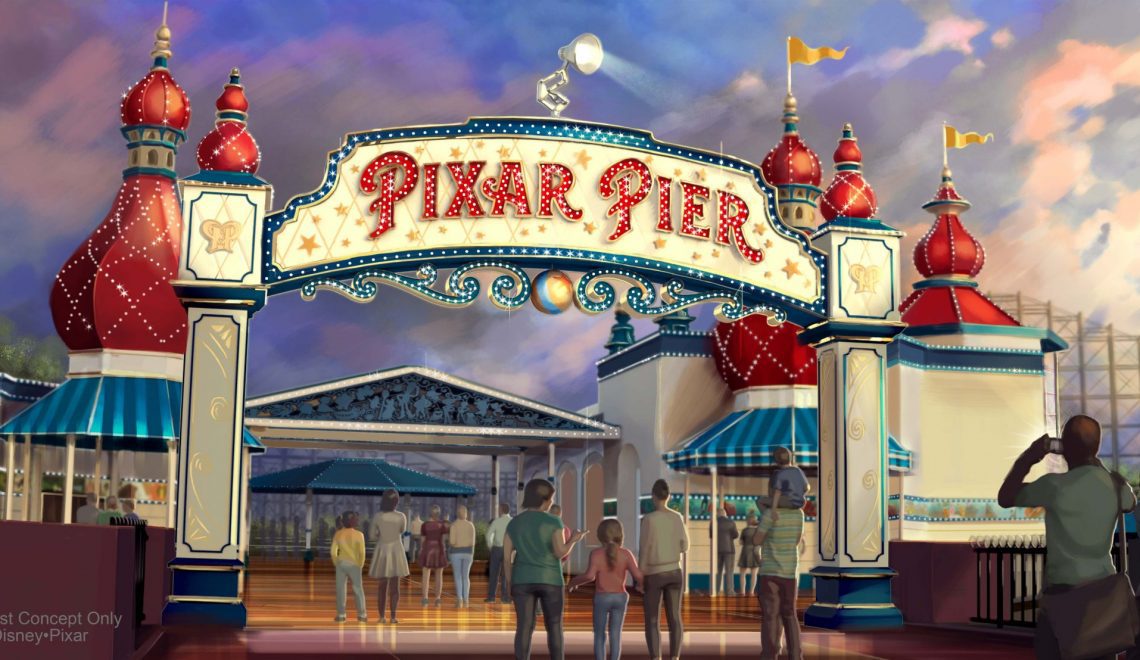 If you thought the Happiest Place on Earth couldn’t get any happier then think again because the wonderful worlds of Pixar are getting a new home at Disney California Adventure Park when Pixar Pier opens on June 23, 2018, transforming the area that is now Paradise Pier with the thrilling, new Incredicoaster, four new imaginative neighborhoods, the new Lamplight Lounge, plus exciting entertainment, themed food and beverage, and merchandise. Guests will experience Pixar stories and characters in incredible new ways on this seaside waterfront at the Disneyland Resort. Pixar Pier, a permanent land along the southern shore of Paradise Bay, debuts during Pixar Fest, a limited-time event that begins April 13, 2018. As a new land, Pixar Pier introduces the exciting new Incredicoaster and Lamplight Lounge. The first-ever Pixar Fest, a celebration of friendship throughout the Disneyland Resort, begins April 13, 2018. For a limited time, guests will enjoy the new fireworks show, “Together Forever – A Pixar Nighttime Spectacular;” the return of “Pixar Play Parade,” appearing for the first time at Disneyland Park; the return of “Paint the Night,” performing this time at Disney California Adventure, and new Pixar elements added to each of those parades. The fun continues with friends from Disney•Pixar films, creatively themed food and beverage items and merchandise that’s exclusive to Pixar Fest. At Pixar Pier, guests will enter Disney California Adventure’s newest land through a dazzling Pixar Pier marquee – topped with the iconic Pixar lamp later in the year. Beloved Pixar stories are introduced in this land through four whimsical neighborhoods. The first neighborhood is inspired by Disney•Pixar’s “The Incredibles” which opens with the new Incredicoaster. Permanently transformed from the attraction that was California Screamin’, Incredicoaster invites guests into a mid-century-modern-style loading area where they will board vehicles with a distinctive, new look. New character moments, new scenes and special effects, and an exciting musical score connect the attraction’s story to Pixar’s “The Incredibles 2,” which opens in theaters June 15, 2018. A fourth new neighborhood celebrates a collection of guest-favorite Pixar stories. Mickey’s Fun Wheel transforms into a newly-themed Pixar attraction, allowing guests to enjoy the beautiful sights of Pixar Pier from 24 new gondolas – each one decorated with a beloved Pixar pal. The midway games are also inspired by Pixar characters, including favorites from “A Bug’s Life,” “La Luna” and “WALL·E”. Another exciting location opening at Pixar Pier on June 23 is the new Lamplight Lounge, an elegant yet fun gathering place for the entire family at the entrance of Pixar Pier. Lamplight Lounge will serve California casual gastro-pub cuisine that is playfully presented, along with unique signature cocktails and a guest-favorite: Lobster Nachos. The seaside lounge will contain a full bar with picturesque waterfront views of Paradise Bay from both upstairs and downstairs. At night, outdoor seating will provide views of the illuminated Pixar Pier and “World of Color.” Lamplight Lounge celebrates the creativity, inspirations and personalities of the artists and storytellers who have brought Pixar stories to life. Guests will discover the artistic marks that Pixar “regulars” have left throughout the lounge, including concept art, a quick sketch on a napkin, knick-knacks and collectible toys of beloved Pixar characters. (Prior to its transformation, this location was Ariel’s Grotto restaurant and the Cove Bar.)