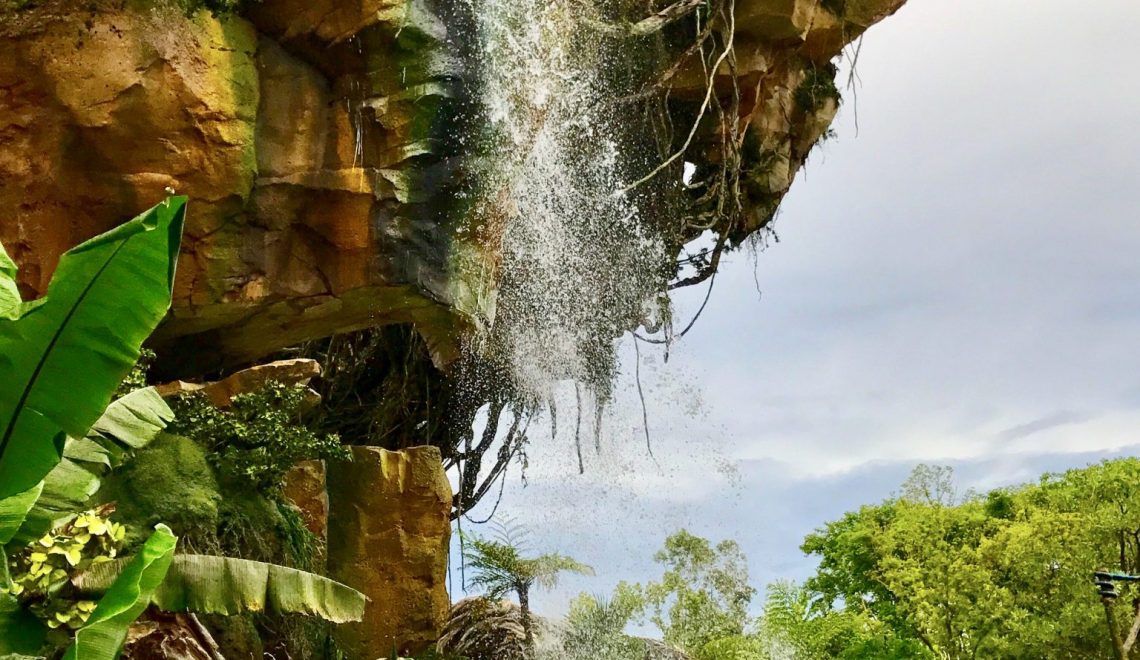 It was Walt Disney’s belief that everything begins with the telling of a great story and in order to tell that story, it is the attention to details that brings that story to life.  Never has that been more true than in the all new Pandora- The World of Avatar now open at Disney’s Animal Kingdom in the Walt Disney World Resort. Having just visited Pandora, we can say without reservation that it is indeed not like anything you have ever seen before and above anything else, it is in all of those smallest of details that makes Pandora a world all onto itself. When you first  journey to the far-away world of Pandora as probable eco-tourists, waiting for you are everything from floating mountains, to a glowing, bioluminescent rainforest and other wonders of an alien world. The backstory tells the tale of  The Valley of Mo’ara on Pandora in the midst of undergoing a rebirth long after a destructive mining operation known as the Resources Development Administration (RDA) ceased operation.  Eco-tourists, for the first time, can travel to this exoplanet located in the Alpha Centauri star system 4.4 light years from Earth. Imagine visiting a world full of mystical world of floating mountains, tropical bioluminescent forests and new experiences that will take your breath away. Pandora, the largest expansion in the history of Disney’s Animal Kingdom, continues the park’s tradition of celebrating the intrinsic value of nature, transformation through adventure and a personal call to action. Inspired by AVATAR, the blockbuster film and Oscar winner directed by James Cameron, this all new thematic area welcomes you to the exuberant world of Pandora long after the conflict between humans and the Na’vi, its native inhabitants, has ended. And the best part is that because the dramatic daytime beauty of the area is transformed in a resplendent way at night when bioluminescent flora come to life seeing Pandora during the nighttime is a totally different experience than seeing it during the daytime but the changes are so subtle as the sun goes down that you almost don’t realize what is happening until you find yourself surrounded by it. Visitors to Disney’s Animal Kingdom follow along the Discovery River from the park to Pandora – The World of Avatar and continue along a winding path through the rainforest to get a first glimpse of the iconic floating mountains of the earth. Pandora – The World of Avatar is a creative collaboration of Walt Disney Imagineering, Cameron and Lightstorm Entertainment, owned by Cameron.  “We bring visitors to this incredible world in a realistic experience as immersed as possible,” said Joe Rohde, creative executive at Walt Disney Imagineering. “In the film, the world of Pandora is a backdrop for action and the characters whose stories we follow. Here, visitors are the main characters immersed in an extremely vivid and authentic experience. “ “Once visitors cross the bridge, light years are transported to the Alpha-Centauri and Pandora solar system,” said Jon Landau, producer of AVATAR and Cameron’s partner at Lightstorm Entertainment. “It’s a thematic experience from another world.” As you explore the green and vast terrain beneath the mountains that appear to float in the sky, you discover breathtaking views of waterfalls coming down the hillside that culminate in winding streams and pools. It is where these two intersect that one will find the two newest Disney attractions- Avatar Flight of Passage and Na’vi River Journey. Avatar Flight of Passage launches you into an exciting experience that has you climbing onto the back of a winged banshee that lifts you over the incredible world of Pandora. This to will feel the banshee breathing beneath them, as they traverse their forests and floating mountains. What Cameron’s film was a rite of initiation for the Na’vi becomes here a multi-sensory experience for visitors looking to live the adventure of their lives: a meeting with the most feared predator of Pandora, the Great Leonopteryx. And because the storytelling begins the moment you enter the queue, it makes the wait go quickly with surprises around every bend.  The attraction itself is one of the most exhilarating things I have ever experienced and even with my mobility issues, I found I could comfortably ride it. On the Na’vi River Journey, recommended for the whole family, visitors navigate a hidden sacred river to a bioluminescent tropical rainforest. Boats with eight seats navigate through glowing exotic vegetation and Pandora’s creatures, until they plunge into a Na’vi musical ceremony. This mystical journey culminates with an encounter with the Shaman of the Songs of the Na’vi, of which it emphasizes its impressive realism. The shaman is connected to the life force of Pandora and, through his music, sends positive energy to the jungle. “The landscape of Pandora is alive with all these creatures,” says Rohde. “We are giving life to everything, from the most immense creature you can find to the most microscopic. Some animals appear under the undergrowth, others do it at the edge of the jungle: here you can hear their songs and calls between one and the other. “ The flourishing landscape of Pandora reinforces the intrinsic messages of Disney’s Animal Kingdom, such as the value of nature, transformation through adventure, conservation and leadership. The creative narrative of Pandora continues as visitors pause at the Satu’li Canteen restaurant, a Quonset-style hut. The casual and fast food restaurant is inspired by the healthy abundance of Pandora: grains and cereals, fresh vegetables and abundant protein. Visitors can also enjoy drinks at nearby Pongu Pongu. Windtraders is the buyer’s delight and it is here that visitors can select between Na’vi cultural items, toys, science kits and much more. Authenticity and realism have been the driving forces behind the creation of Pandora. And the result leaves with the mouth open. One thing is certain, whether you were a huge fan of the original film, or have never seen it or somewhere in between, from the moment you step into Pandora-The World of Avatar, you be swept away and totally immersed in the magic of this galaxy more so than anything than you have ever experienced before.