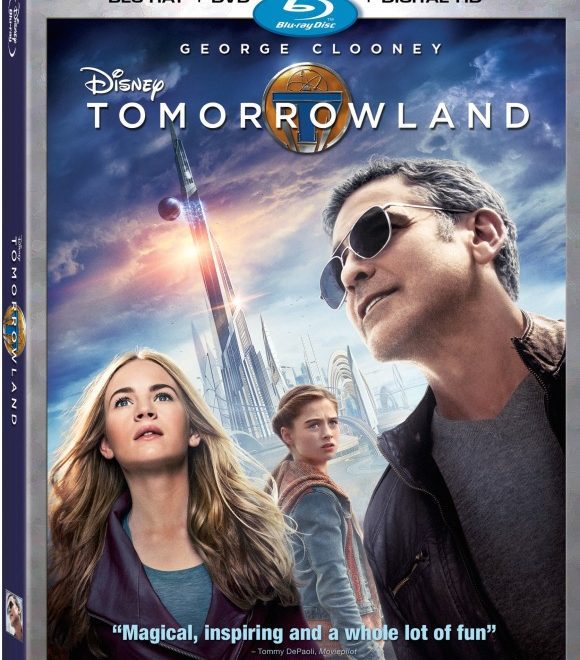 “You wanted to see Tomorrowland? Well hang on because here it is” This Tuesday you can bring home the future when Disney’s Tomorrowland  is released on Blu-Ray Combo pack, Digital HD and Disney Movies Anywhere.  Now you and your family can relive all the special moments from the film that dared to ask “We’ve been looking for someone like you for a very long time. You represent the very best and the most imaginative the world has to offer and that is why you have been selected to come to Tomorrowland- a secret place where nothing is impossible. A place where your dreams of the future become reality. A place where you could actually change the world. So now the only question left to answer is, wanna go?” But now you can journey to Tomorrowland without ever leaving home. Your express trip to Disney’s Tomorrowland is now boarding and ready to jet you away to the greatest retro-futuristic action adventure of the year. Family entertainment at its very best, Tomorrowland will take you to a place of inspiration and dreams and leave you with a feeling of hope for the future for you and the generations to come. From the Director of “The Incredibles,” Blast Off with this Family Adventure on Blu-ray™ Combo Pack, Digital HD and Disney Movies Anywhere (DMA) on October 13 featuring exclusive bonus Including deleted scenes, the casting of Tomorrowland, Brad Bird Production Diaries, and more

Join former boy genius Frank (George Clooney), optimistic, science-minded teen Casey (Britt Robertson), mysterious Athena (Raffey Cassidy) and the brilliant David Nix (Hugh Laurie) in a world of pure Disney imagination. Tomorrowland transports you on an inspiring and magical journey of wonder and adventure to a place where if you can dream it, you can do it.

• Remembering the Future: A Personal Journey Through Tomorrowland with Brad Bird
Discover everything there is to know about the making of Tomorrowland through Director Brad Bird’s perspective. • The World of Tomorrow Science Hour – Hosted By Futurologist David Nix (Blu-ray and DMA Exclusive)
Believe it or not but Nix used to host a children’s television program about science. Now watch the recently discover outtakes from the show.

• Animated Short: The Origins of Plus Ultra
An animated story of how Tomorrowland came to be.