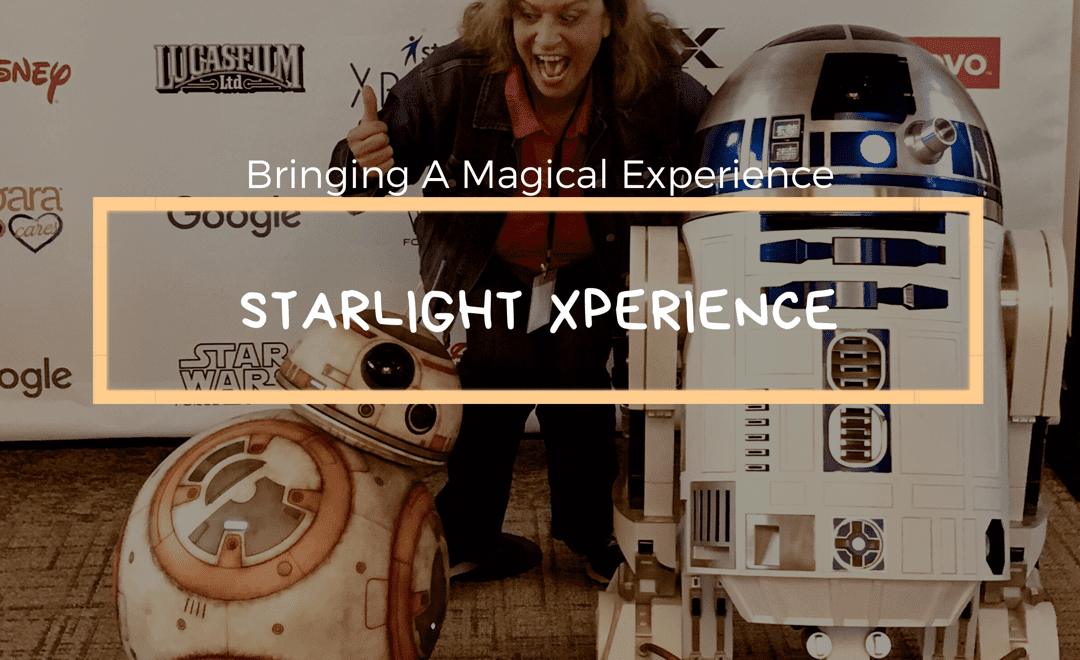 Yesterday I was honored to be among the first to see the launch of the all-new Starlight Xperience, that through the use of Virtual Reality allows hospitalized children to “leave the confines” of their hospital rooms through a series of magical experiences that can transport them to the 7 Wonders of the World, to swimming along the Great Barrier Reef or transform to a galaxy far, far away where they can create and fix their own droids.

Unveiled yesterday at Lucasfilm in San Francisco, it wasn’t just the electricity of excitement of this project you could feel but the genuine passion of this multiyear labor of love as this innovative virtual reality program was finally launched and will soon be in over 150 hospitals transforming the hospital experience for children all over the country.

Teaming with founding sponsor, Star Wars: Force for Change, the Starlight Foundation has joined forces with The Walt Disney Company, Lucasfilm, Lenovo, Google and Niagra Bottling and Niagra Cares to expand upon the  Starlight Children’s Foundation mission of creating moments of joy and comfort for hospitalized kids and their families. I was in the room to see firsthand how their newest initiative, the Starlight XperienceTM virtual reality, a groundbreaking new technology program will offer potentially millions of seriously ill children a fun and exciting way to explore the world and beyond through the magic of VR.

Built for the Lenovo Mirage Solo with Daydream, Starlight Xperience features a state-of-the-art and hospital-ready headset that comes preloaded with age-appropriate and dynamic content geared toward entertainment and distraction for hospitalized kids, which has been specifically modified to meet strict infection safety protocols for use in hospital settings.

Pre-loaded content includes educational field trips to exotic locations through Google Expeditions and Street View, fun interactive stories like Star Wars: Droid Repair Bay by ILMxLAB, and Lola and the Giant, popular apps such as Ocean Rift and Hello Mars, and meditation exercises and therapeutic games such as Relax VR, which allows the patient to escape into beautiful environments Starlight Xperience was created in collaboration with Founding Sponsor, Star Wars: Force for Change, the charitable initiative from Lucasfilm and The Walt Disney Company that harnesses the power of Star Wars to empower and improve the lives of children around the world.

Through grant funding provided by The Walt Disney Company and Niagara Cares – the philanthropic arm of Niagara Bottling – as well as charitable donations from grassroots donors, Starlight Xperience will be provided at no cost to Starlight’s network of more than 800 children’s hospitals and other healthcare facilities across the US.

“We believe Starlight Xperience has the potential to transform the hospital experience for millions of seriously ill children and their families,” said Chris Helfrich, CEO of Starlight Children’s Foundation. “We’re thrilled to stand beside The Walt Disney Company, Google, Lenovo and Niagara Cares in unveiling this exciting new program, which is the latest evolution in our 35-year history of bringing innovative entertainment technologies to hospitalized kids.”

“Providing these unique entertainment experiences reflects our commitment to bring comfort during what can be difficult times for kids and families. This is part of our Disney Team of Heroes initiative, which includes a $100 million commitment to children’s hospitals,” said Elissa Margolis, senior vice president, Enterprise Social Responsibility for The Walt Disney Company. “The collaboration with Google and Lenovo is the perfect blend of technology and content that we’ll be able to deliver to kids during their hospital stay.” “Our goal has always been to create virtual reality experiences that are accessible, useful, and relevant to as many people as possible,” said Amit Singh, VP of Business & Operations for AR & VR at Google. “Starlight Xperience is a shining example of that goal coming to life in a really great way. We’re thrilled to be able to support Starlight in bringing transporting VR experiences to hospitalized children across the country.”

“We are thrilled to be working with Starlight and Google to bring technology to hospitalized children in their time of need. Helping to provide a solution for the children and their families allows us to truly make a difference for the better,” said Gunjan Shah, general manager for North America Smart Devices at Lenovo.

Starlight Xperience was developed in part through a series of grants provided by Starlight to the CHARIOT program (short for Childhood Anxiety Reduction through Innovation and Technology) at Lucile Packard Children’s Hospital Stanford. CHARIOT implements new technologies in the hospital that are nontraditional yet familiar to children to engage and distract them during stressful or painful procedures, keeping clinical usage in mind and improving upon the typical hospital experience. “At Gillette Children’s Specialty Healthcare, virtual reality has been a fantastic addition for our patients,” said Chantel Barney, Ph.D., a clinical scientist who leads Gillette’s VR program. “In some instances, we’ve been able to curb the anxiety and fears our kids typically experience during procedures such as blood draws, transfusions, wound cleanings, casting and more. It’s a wonderful distraction for kids and parents alike.”

“We’re proud to support Starlight Xperience and look forward to bringing smiles to the faces of hospitalized children through this educational and inspirational program,” said Andrew Peykoff II, President and CEO, Niagara Bottling. “This technology makes learning fun and we’re excited to expand the program to even more children.”

Thanks to the grants provided by The Walt Disney Company and Niagara Cares, in addition to the generosity of charitable donations from individuals, Starlight is on track to deliver up to 1,000 Starlight Xperience kits to its network of hospital partners by the end of 2018, with a goal of doubling that by the end of 2019. A donation to Starlight will entertain, educate and inspire hospitalized kids across the US through stimulating immersive experiences that transport children from the hospital to any place in the world – or beyond – through the magic of virtual reality. To learn more and support the program and how you can help to create magic for hospitalized children, be sure to check out  www.starlight.org/starlight-xperience.

Starlight creates moments of joy and comfort for hospitalized kids and their families. For 35 years, Starlight’s programs have positively impacted more than 60 million critically, chronically and terminally ill or injured children in the US, Canada, Australia and the UK. With your help, more kids and their families will enjoy Starlight Gowns, Starlight Fun Centers and other Starlight programs at a children’s hospital or facility near you. Support Starlight’s work by visiting www.starlight.org and by following Starlight on Facebook, Instagram andTwitter.

ABOUT STAR WARS: FORCE FOR CHANGE

Star Wars: Force for Change, a charitable initiative from Lucasfilm and Disney, harnesses the strength of Star Wars to empower and improve the lives of children around the world. Since 2014, it was inspired by Star Wars fans, and the countless hours they have dedicated to philanthropy over the past four decades. To date, over $16 million has been raised for charitable causes around the world on behalf of Star Wars: Force for Change. With a bright future ahead, and new Star Wars stories to be told, Force for Change aims to continue collaborating with causes and encouraging others to be forces for change in their own community. To learn more, please visit ForceForChange.com.

ABOUT THE WALT DISNEY COMPANY

The Walt Disney Company, together with its subsidiaries, is a diversified worldwide entertainment company with operations in four business segments: Media Networks; Studio Entertainment; Parks, Experiences and Consumer Products; and Direct-to-Consumer and International. Disney is a Dow 30 company and had annual revenues of $55.1 billion in its Fiscal Year 2017.

Lenovo  is a US$45 billion Fortune Global 500 company and a global technology leader in driving Intelligent Transformation through smart devices and infrastructure that create the best user experience. Lenovo manufactures one of the world’s widest portfolios of connected products, including smartphones, tablets, PCs (ThinkPad, Yoga, Lenovo Legion), data centers and workstations as well as AR/VR devices and smart home/office solutions. Lenovo works to inspire the difference in everyone and build a smarter future where everyone thrives. Follow us on LinkedIn,  Facebook,  Twitter,  Instagram,  Weibo, read about the latest news via our Storyhub, or visit our website at http://www.lenovo.com/.