#Disneyland60 #60DaysTo60Years -1955 Welcome To The Happiest Place On Earth 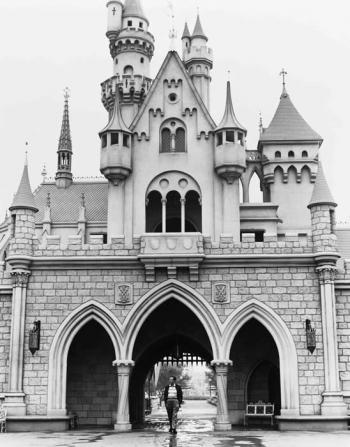 “I first saw the site for Disneyland back in 1953, In those days it was all flat land – no rivers, no mountains, no castles or rocket ships – just orange groves, and a few acres of walnut trees.”- Walt Disney

On July 17, 1955, the dream became a reality and the “Happiest Place on Earth” opened its arms to welcome its very first guests. Now, almost sixty years later, Disneyland has continued to be a most magical place where all your dreams can and do come true- a place where “laughter is timeless, imagination has no age and dreams are forever.” I was one of those lucky ones to first experience the magic that Disneyland® sprinkled on all of those that entered this most magical of places that becomes a part of your heart, soul, being and the legacy you leave to generations to come.  My first visit to The Happiest Place on Earth was in October, 1955 .  I was 9 months old at the time and I haven’t missed a year since then.  To this day I can still remember the sights and sounds. The smell of the popcorn, the hustle and bustle, the laughter, and joy and especially the colors of all that surrounded me.  I also have vivid recollections of my mom trying to board the World Famous Jungle Cruise and losing her footing and almost dropping me in the water-and if you don’t believe me, then you’re in de-Nile.  Today this remains my all time favorite attraction and someday, I will captain the boat. Other memories include much of Tomorrowland, especially the House of the Future. If you’ve ever wondered if you’re child is too young to visit Disneyland®, I can say with 100% certainty, you’re never too young, or too old to experience the magic and hold onto those memories.

Disneyland® first opened on July 17, 1955 for what was to be a media only preview, with the general public getting their first glimpse on July 18, 1955.  The first ticket into the Park was purchased by none other than Roy Disney.  On my recent tour of the Walt Disney Archives, I was actually lucky enough to see that actual ticket along with other memorabilia from those first few days-and yes I shed a tear or two knowing what this would come to mean to me and my life. The concept for Disneyland began when Walt Disney was visiting Griffith Park in Los Angeles with his daughters Diane and Sharon. While watching them ride the merry-go-round, he came up with the idea of a place where adults and their children could go and have fun together. While his daughters enjoyed their repeated rides, Disney sat on park benches with the other parents who had nothing to do but watch. It was on these Sunday excursions that Walt Disney began to dream of an activity park that had things for both children and parents to do.

At first, Disney envisioned an eight-acre park which would be located near his Burbank studios and be called, “Mickey Mouse Park.” However, as Disney began to plan themed areas, he quickly realized that eight-acres would be way too small for his vision.

Although World War II and other projects put Disney’s theme park on the back burner for many years, Disney continued to dream about his future park. In 1953, Walt Disney was finally ready to start on what would become known as Disneyland. The first part of the project was to find a location. Disney hired the Stanford Research Institute to find an appropriate location that consisted of at least 100-acres, was located near Los Angeles, and could be reached by a freeway. The company found for Disney a 160-acre orange orchard in Anaheim, California. Many of the financiers could not envision the monetary rewards of a place of dreams. To gain financial support for his project, Disney turned to the new medium of television. Disney made a plan with ABC: ABC would help finance the park if Disney would produce a television show on their channel. The program Walt created was called “Disneyland” and showed previews of the different themed areas in the new, upcoming park. On July 21, 1954, construction on the park began. It was a momentous undertaking to build Main Street, Adventureland, Frontierland, Fantasyland, and Tomorrowland in only one year. The total cost of building Disneyland would be $17 million. Disneyland opened to the public on July 18, 1955, with an entrance fee of $1. Walt had planed out all the lands, to every detail. Main Street, U.S.A., the very front of the park, was where Walt wanted to relive the typical turn of the century city Main Street. He said: “For those of us who remember the carefree time it recreates, Main Street will bring back happy memories. For younger visitors, it is an adventure in turning back the calendar to the days of grandfather’s youth.”

Walt made Main Street U.S.A the entrance to a “weenie,” as he called it. He said: “What you need is a weenie, which says to people ‘come this way.’ People won’t go down a long corridor unless there’s something promising at the end. You have to have something the beckons them to ‘walk this way.'”
Walt also had planed for an “exotic tropical place” in a “far-off region of the world.” Called Adventureland. Walt said, “To create a land that would make this dream reality, we pictured ourselves far from civilization, in the remote jungles of Asia and Africa.” Frontierland was made to relive the pioneer days of the American frontier. Walt said:
“All of us have a cause to be proud of our country’s history, shaped by the pioneering spirit of our forefathers. . .Our adventures are designed to give you the feeling of having lived, even for a short while, during our country’s pioneer days.” Fantasyland was created with the goal to “make dreams come true” from the lyrics of “When You Wish Upon a Star.” Walt said:
“What youngster. . .has not dreamed of flying with Peter Pan over moonlit London, or tumbling into Alice’s nonsensical Wonderland? In Fantasyland, these classic stories of everyone’s youth have become realities for youngsters-of all ages-to participate in.” Fantasyland would feature a large Sleeping Beauty Castle, and a Fantasy Village.
Tomorrowland was created as a look at the “marvels of the future.” Walt said: “Tomorrow can be a wonderful age. Our scientists today are opening the doors of the Space Age to achievements that will benefit our children and generations to come. . .The Tomorrowland attractions have been designed to give you an opportunity to participate in adventures that are a living blueprint of our future.”  Walt had trouble working on Tommorrowland. He said that “right when we do Tommorrowland, it will be out dated.” What was true when Walt Disney stated it during the opening ceremonies in 1955 still stands true today: “To all who come to this happy place – welcome. Disneyland is your land. Here age relives fond memories of the past and here youth may savor the challenge and promise of the future. Disneyland is dedicated to the ideals, the dreams, and the hard facts that have created America… with the hope that it will be a source of joy and inspiration to all the world. Thank you.”

Walt also said, “Disneyland will never be completed. It will continue to grow as long as there is imagination left in the world.”

Disneyland always has been, and always will be my place where all my dreams can and do come true. No matter how old I become,  or the number of visits I have make to the Happiest Place on Earth, I still get that heart-racing excitement from the moment I walk into the Park, pause under the railroad bridge and stop to read Walt’s immortal words.  It is the one place where I can live in the moment and allow myself to feel the child within.  It’s my connection between the generations, between parent and child, and is the legacy and memories I give to my children, and for them in turn to pass on to their own children for many generations to come.  Happy Diamond Celebration Disneyland-we can’t wait to be dazzled. Join us as 60 bloggers join together over the next 60 days all leading up to 60 years of magic.  It’s all happening in our #60DaysTo60YearsAtDIsneyland.