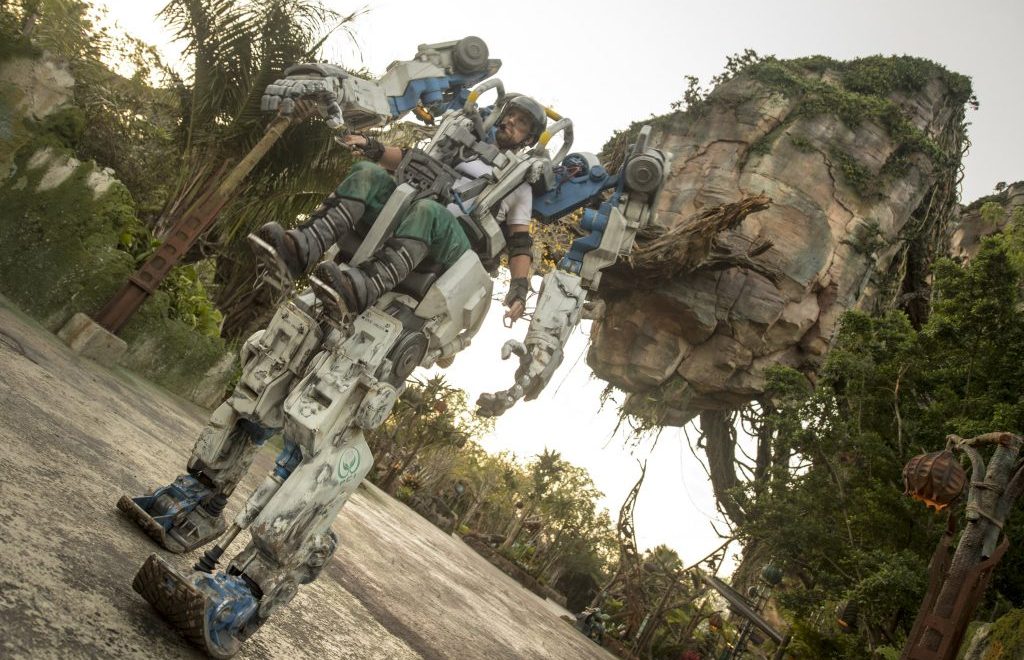 This weekend Disney’s Animal Kingdom is celebrating its 20th anniversary with a look back at some of our favorites over the years, and in true Disney fashion the introduction of the new because in the words of Walt Disney himself: “Around here, however, we don’t look backwards for very long. We keep moving forward, opening up new doors and doing new things, because we’re curious…and curiosity keeps leading us down new paths.”

And even Pandora-The World of Avatar which celebrates its 1st anniversary Memorial Day weekend is moving forward with the debut of the first of its kind, towering mechanical utility suit, inspired by the AVATAR film. A 4.2-ton, towering mechanical suit is sure to stop guests in their tracks when it debuts at Pandora – The World of Avatar at Disney’s Animal Kingdom on April 22. The new Pandora Utility Suit is inspired by the iconic Amplified Mobility Platform (AMP) suits of power armor from the epic film AVATAR.

Perched ten feet high, a human pilot straps into the cockpit of this exo-carrier and controls its powerful, yet agile movements. The giant walking suit was designed with articulated hands and a shoulder span of more than five feet. It also bears claw marks and battle scars from a Thanator – an alpha predator on Pandora. But the Pandora Utility Suit was actually designed for restoration, while the film’s AMP suits were created for infantry missions of destruction. Its streamlined structure and technical upgrades make it the perfect tool to collect plant samples, study flora and survive Pandora’s wild terrain. Like all the lands at Disney’s Animal Kingdom, Pandora is rooted in nature. The Pandora Utility Suit showcases that in dramatic fashion. As the suit traverses the land daily, its pilot will interact with guests, share details about the land’s otherworldly landscape, and highlight the importance of preserving nature. The Pandora Utility Suit continues the collaboration between Disney and Lightstorm Entertainment that first brought Pandora – The World of Avatar to life nearly a year ago. The suit will debut April 22 as part of the 20th-anniversary celebration of Disney’s Animal Kingdom at Walt Disney World Resort. Stay tuned right here or across our social channels when we come to you live from the 20th Anniversary Celebration at Disney’s Animal Kingdom. It will be a party to remember. Here’s a preview of what’s taking place in honor of Earth Day and Animal Kingdom’s 20th Anniversary:

“I don’t like formal gardens. I like wild nature. It’s just the wilderness instinct in me, I guess” – Walt Disney

It seems like it was just yesterday that Disney’s Animal Kingdom opened its doors to guests thus introducing to the world a place where the magic of nature with rare animals and world-class entertainment came together but in just a few short weeks, Disney’s Animal Kingdom will mark its 20th anniversary on Earth Day, April 22, with more wild adventures than ever before – kicking off spring and setting the stage for an incredible summer filled with all-new events and experiences at the Walt Disney World Resort.

Inspired by the blockbuster film, AVATAR, the epic land invites guests to explore a glowing landscape, encounter a larger-than-life Na’vi Shaman of Songs and soar on the back of a banshee.

This Earth Day, come join in the celebration as Disney’s Animal Kingdom marks their 20th anniversary with more wild adventures than ever before – kicking off spring and setting the stage for an incredible summer filled with all-new events and experiences at the Walt Disney World Resort.