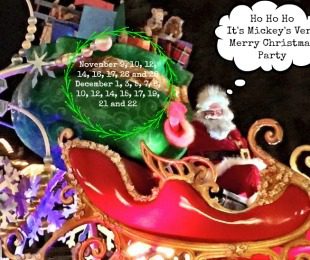 It’s beginning to look a lot like Christmas at the Walt Disney World Resort! Get ready to trim the tree, drink hot chocolate and take in snow on Main Street as the holiday season is about to bring out the happiness in us all with great big whipped cream smiles for young and young at heart with a Christmas party like no other, with joyful music, a shimmering Cinderella Castle, characters in their festive finery and Magic Kingdom Park decked out and even more magical for merry-making guests of all ages. Celebrate the most wonderful time of the year with Mickey, Santa and plenty of Disney friends at Mickey’s Very Merry Christmas Party. The special holiday festivities feature live entertainment, dazzling fireworks, a cheery parade and more. The party becomes even merrier with complimentary treats and hot cocoa, plus a magical snowfall on Main Street, U.S.A.