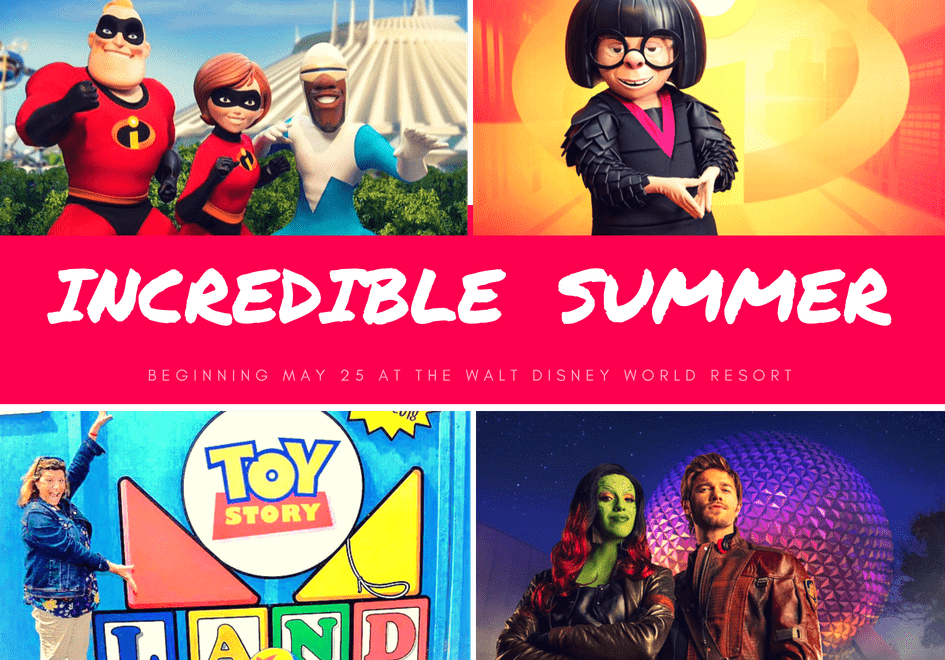 With SUPER designer Edna Mode on hand to greet you, a Super Dance Party led by Mr. Incredible, Mrs. Incredible and Frozone and a world of new and exciting things for every member of the family, you won’t want to miss any of the Incredible fun waiting for you to immerse yourself in some of your all-time favorite Disney films.

Here’s what’s coming to each of our four parks and more.

An Incredible Tomorrowland Expo Begins at Magic Kingdom® Park May 25 Your favorite Disney•Pixar Super Heroes will take over Tomorrowland from May 25-Sept. 3, 2018 as part of an Incredible Tomorrowland Expo that celebrates “all things super.” You are invited to interact with Mr. Incredible, Frozone and other supers from Disney•Pixar’s “The Incredibles” and upcoming “Incredibles 2.” And, for the first time ever, you and the family will get to see Edna Mode. Tomorrowland will also be decked out with Incredibles décor and sounds from the film. You  can dance the night away and enjoy a “SUPER” dance party on the Rocket Tower Stage. Disney’s Animal Kingdom® Theme Park kicked off their 20th-anniversary celebration April 22, 2018 and will launch two new animal-themed experiences. Donald’s Dino-Bash! is a “dino-tastic” celebration where Donald Duck takes over Dinoland, U.S.A. to celebrate his recent discovery that ducks are descendants of dinosaurs. Feathered friends Scrooge McDuck and Launchpad McQuack and other friends of Donald will be on hand to meet your family. In addition to bringing his own decorating touch to the land, Donald will throw a nightly dance party where everyone is welcome to “shake their tail feathers.” On April 22, 2018 Disney’s Animal Kingdom debuted its brand new show, UP! A Great Bird Adventure, which features Russell and Dug from the Disney•Pixar animated film “UP.” In this new show, the gang has come together to discover species of birds from around the world. Disney’s Typhoon Lagoon will join in on the Incredible Summer fun starting June 21, 2018, with new Disney H20 Glow party nights. The water park will transform on select evenings June 21-Aug. 11, 2018 when a glow party takes over the park from 8 p.m.-11 p.m. Tickets are now on sale and are $55 per person plus tax for adults and $50 per person plus tax for children ages 3-9.

One major highlight of “Incredible Summer” will be the grand opening of Toy Story Land at Disney’s Hollywood Studios. This new 11-acre land will shrink you and the family to the size of a toy and allow them to explore the fun and adventure of Andy’s backyard. The land’s Woody’s Lunch Box will be a new quick-service restaurant that will offer up tasty meals and old-fashioned soda floats which are the perfect way to top off a great day. Everyone’s favorite family of superheroes is back in “Incredibles 2” – but this time Helen is in the spotlight, while Bob navigates the day-to-day heroics of “normal” life at home with Violet, Dash and baby Jack-Jack, whose superpowers are emerging.

When a new villain hatches a brilliant and dangerous plot, the family and Frozone must find a way to work together again—which is easier said than done, even when they’re all Incredible. “Incredibles 2” busts into theaters on June 15, 2018. It’s shaping up to be one Incredible Summer at the Walt Disney World Resort. Grab the family, don’t forget to pack you super suits and capes and let the magic begin!