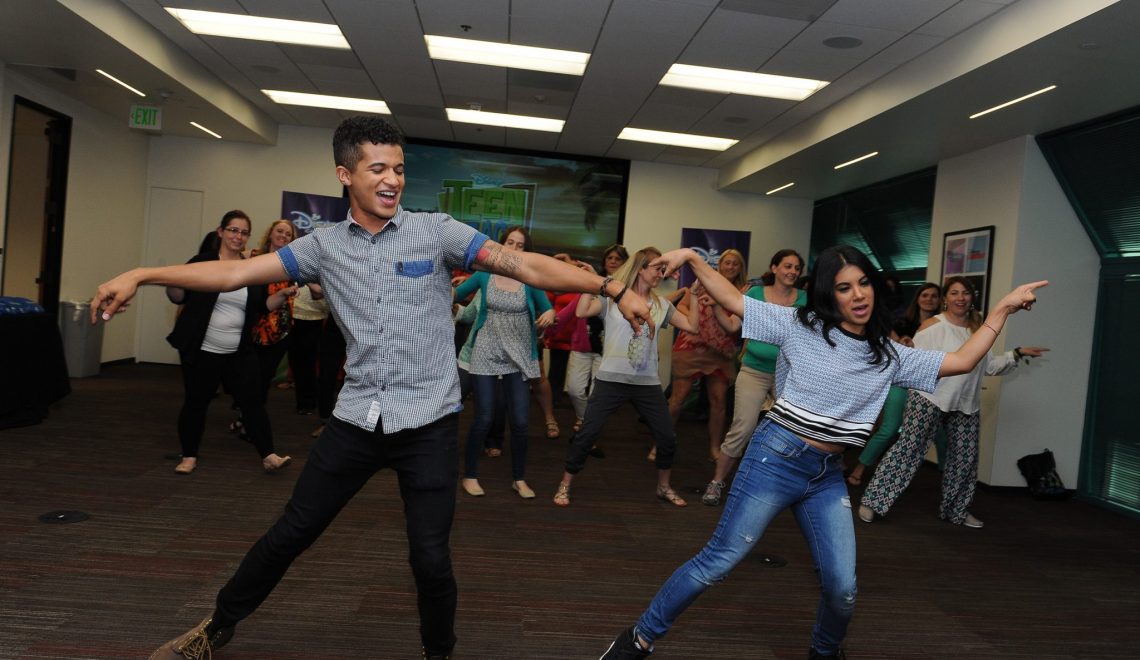 What do you get when you take 25 bloggers from all over the country, and add in dance lessons from the talented Chrissie Fit and Jordan Fisher? A room full of giggles, laughter and fun! Earlier this week I traveled to the Disney Channel for a special screening of the most anticipated sequel, at least in our house, ever Teen Beach 2 , which airs June 26 on the Disney Channel. Truth be told, Hailey and Lyssie have Teen Beach Movie on a 24/7 loop so when they found out that not only was I getting a sneak peek at the new movie, but I was meeting Chrissie Fit and Jordan Fisher –yes I am now THE coolest Grammy ever.

Without giving away too much of the plot, I can say without reservation that if you’re a fan of the first, you are going to absolutely fall in love with the second. From the singing and dancing, to the music to the powerful message, this is family entertainment at its best. The morning started out with a screening of Teen Beach 2 . The movie makes you want to sing along and get up and dance from the very first downbeat. Filled with all the heartwarming charm of the first, the characters in the movie model healthy and supportive friendships as well as showcasing strong examples of female characters all while encouraging all kids, no matter what their age, to believe in themselves and it’s all done effortlessly through relatable storylines. But the message of the movie didn’t stop on the screen. After the screening we had the chance to sit down and talk to Chrissie and Jordan and it was apparent that they weren’t just “playing a role”- the message was something they believed in and practiced daily in their own lives. They embodied a spirit of positivity and showed first hand what the power of believing in yourself can do and how it can change your life. What really touched my heart the most though was during our conversation with them, they both stressed the importance of education and getting your college degree. When I jokingly asked if they would tell my son that and they took my phone and called him right then and there. The impact that small act made on Zack, will stay in my memories, and his for many years to come. And then the moment came that we all had waited for-and dreaded all at once-the dance lesson. Just because you’re the mother of a dancer, does not make you a dancer too but suddenly within minutes, Jordan and Chrissie had each and every one of us on our feet  dancing-on beat I might add-like we had been doing it all of our lives. It became clear very early on in the lesson, that like the movie, it was not about learning the actual steps but the fact that we were up, moving and having fun making it our own. By the end of 10 minutes we were all dancing like seasoned pros, with smiles on our faces and joy in our hearts. I can just imagine this being played out in our own home and as well as homes across the country as families  come together and share in the fun of the music and dance numbers. As a mom to 5 and a Grammy to 4 as well as a kindergarten teacher who dances with her class many times a day, kids don’t care what you look like- what they care about is that you are up and doing it with them.

I promise you that once you take that first step, you’re going to discover, just as we did that the music and dance from Teen Beach 2 will be fun for everyone in the house. There isn’t a family around that won’t have the time of their lives learning the dance numbers and as you will find out for yourselves, sometimes you just have to spontaneously break into song and dance.

There’s good things coming around the bend. It’s time to write your own story and make your own destiny. Get ready for Teen Beach 2 . With its multigenerational appeal, lighthearted humor, incredible music and dance numbers that will stay with you long after the movie is over, it’s the perfect movie choice that the entire family can enjoy together. Teen Beach 2 premieres on The Disney Channel on June 26 but why wait? Head on over to the Disney Channel and get up and move with these fun videos that will have you singing and dancing in no time at all! Stay tuned over the next few weeks as we bring you our exclusive interview with Chrissie Fit and Jordan Fisher as well as show you how to throw your very own Teen Beach 2 inspired party.
https://youtu.be/mYUYMmn75hY