Make a Splash! How To Throw Your Own Mermaid Party 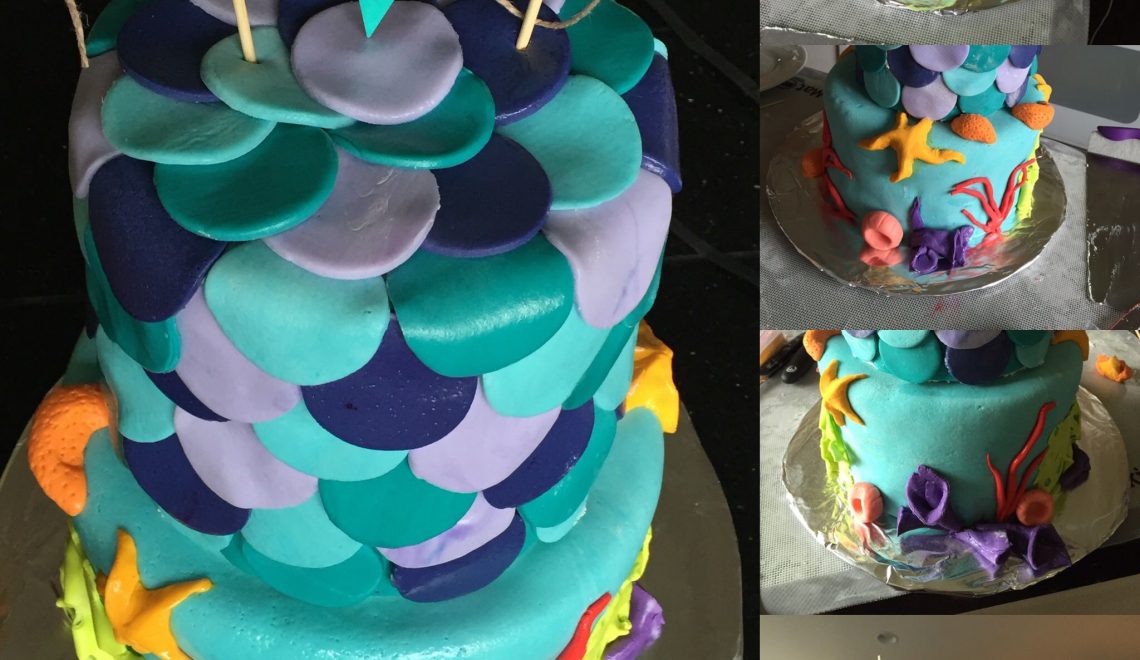 My daughter recently turned one and I couldn’t resist keeping all the decorations from the baby shower and try to repurpose a few of them for her first birthday. My color options were lavender and aqua! My inspiration became a mermaid party! It would be great! Seeing as my personal favorite among the Disney Princesses is Ariel I knew that this would be a hit at our house. So the planning began. As with almost anything I do I begin by dreaming on my Pinterest page where I began a board all about Audrey’s first birthday. The options were endless (kind of hoping for her to want to do this again in about 6 years)! There were some things that I knew I wanted to do myself and so I prioritized what I felt like the must have’s versus the “would be nice”. I knew I wanted an awesome cake! I loved the fondant scales on the cakes that I found. I also knew that I wanted the older kids to have an activity to do since Northern California was going to be too wet for outside activities and games. I also wanted a buffet that would carry on  the theme throughout. My “would be nice” was starfish hair clips for the girls and moms, jellyfish lanterns, and a seashell garland. I knew that with two kids I needed to create a priority-of-work list. My military experience has taught me to “back-plan” from events. So that is what I did. I knew that the cake would need to be completed the day before in order to clean up and stage the kitchen for the party. So I baked the cake and let it set overnight with the base frosting and filling completed and only the fondant work to be done. The day before the party I completed the cake and refrigerated it until right before the party. I prepped all the starfish clips for the ladies earlier while the kids were napping (took 10 mins to do the whole project). Hot glue, starfish, and metal hair clips made for quick work! I made the jellyfish for my dinning room window about a week before the party while the kids were playing. This was so simple. I just cut spirals out of the paper and then hung the paper from the metal wire inside the lantern using two sided tape! The hard part was keeping the kids from playing with their tails!!! The seashell garland was another easy project. I had everything on hand to make this, seashells we had collected along our travels (you can buy these at almost any craft store), twine, and hot glue. I cut random lengths of twine and tied a loop to the end then assembled by threading them onto the main twine strand. I have an unusual wall and felt that it made it more decorative and less a giant whole! The mason jars were used for my baby shower and had tulle and pearls inside them from the shower.I removed the bows and lace from the neck of the jar and added burlap ribbon and a dark purple and aqua ribbon around the middle. I then added mini forks as dingle-hoppers and starfish on alternating sides.

I purchased The Little Mermaid play-set and used this for the cake and buffet along with fish net and extra shells to keep things nautical! The day of the party I laid out the kids activity. We would make under-the-sea-globes using;

Table cloths!!! (a must for glitter and oil) The kids really enjoyed picking their fish, sharks, turtles and more to put in their jars! Here is what my sons’ looks like! (Not bad for 3!) But with kids as old as 7 this was something that they all could get into. The baby oil was the key, it keeps the glitter suspended longer. For the drinks all I did was take a large fish bowl and make a blue punch! I am not sure who created this combination but it was a HUGE success! It was just lemonade and Blue Hawaiian punch. I added Swedish Fish to make it a little more fun. I thought the kids would like it but little did I know the adults would LOVE it!!! Also made some Horchata (looks like murky sea water) since the meal was street tacos! We had The Little Mermaid on loop during the party and kept things casual! It was oceans of fun to do this and celebrate with everyone!