Make It A Celebration Fit For A Princess And Bring Home Elena of Avalor: Celebrations To Remember- Now Available! 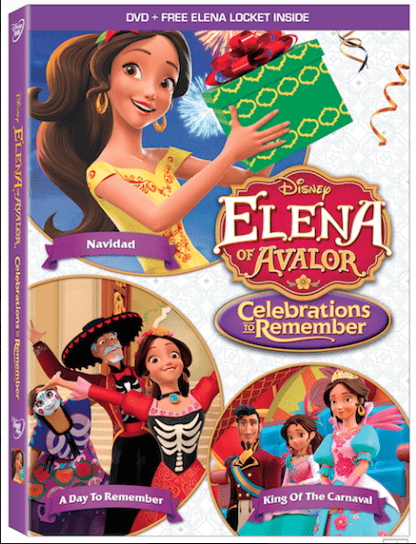 If your house is like our house, we our huge fans of Elena of Avalor. The newest Disney Princess of them all, Elena of Avalor quickly captured the hearts and minds of young and old alike as we all fell in love with the young lady who exuded confidence, charm and was ready to show the world that this was Princess who could truly do anything.

Set in the enchanted fairytale land of Avalor, the series tells the story of Elena, a brave and adventurous teenager who has saved her kingdom from an evil sorceress. She must now learn to rule as crown princess until she is old enough to be queen. Needing assistance to rule Avalor, Elena enlists the help of the Grand Council, made up of Grandfather Tito, Grandmother Cici and royal adviser Duke Esteban.  Princess Elena goes on many adventures – with wizard-in-training Mateo and magical Skylar at her side – that help her understand the traits that make a good leader. Elena’s journey will lead her to understand that her new role requires thoughtfulness, resilience and compassion, the traits of all truly great leaders.

And now get ready to light the candles, prepare the feasts and share the fun because starting September 12, you can bring home all of the magic of Elena of Avalor to your house as with the release of Elena of Avalor: Celebrations to Remember Disney DVD set that includes FOUR celebration themed episodes of the beloved princess along with two bonus episodes and as an extra bonus, a FREE exclusive Elena locket making the day of the princess in your life! Now you can join  Crown Princess Elena, along with her family and friends, as they honor the past, rejoice in the present and greet the future with music, laughter and love. Whether celebrating Navidad, Dia de los Muertos or Carnaval, new and older traditions alike play a part. And even though everyone doesn’t always agree on the best way to get the party started, one thing is perfectly clear: holidays aren’t about what you do; they’re about the special people you spend them with! And now you can make your viewing party even more magical by bringing home some of the latest Elena of Avalor fun including: Bring the enchanted kingdom to life with this six-piece figure set inspired by Disney Junior’s new series Elena of Avalor. The teenage princess is joined by her sister Isabel, the winged Skylar, and others in this detailed set. Now bring Elena and her friend home with this Picture palace Avalor’s teenage princess Elena holds court surrounded by friends and family in this puzzle. The 64 large pieces are designed for little hands, and come in a box with sparkly carry handle for on-the-go fun. This adorable water bottle fit for any princess includes , Disney Princess Elena screen art, a flip-top sipper with attached straw, includes finger grip carabina clip to attach to backpack or belt loop and holds 16 oz-perfect for the princess on the go! September 12 get ready to light the candles, prepare the feasts and share the fun of Celebrations to Remember.and bring home Elena of Avalor: Celebrations To Remember and let the fun of Disney’s newest princess begin.

Disclosure: We have received products for the purposes of this review however the thoughts and opinions express here are 1005 our own.