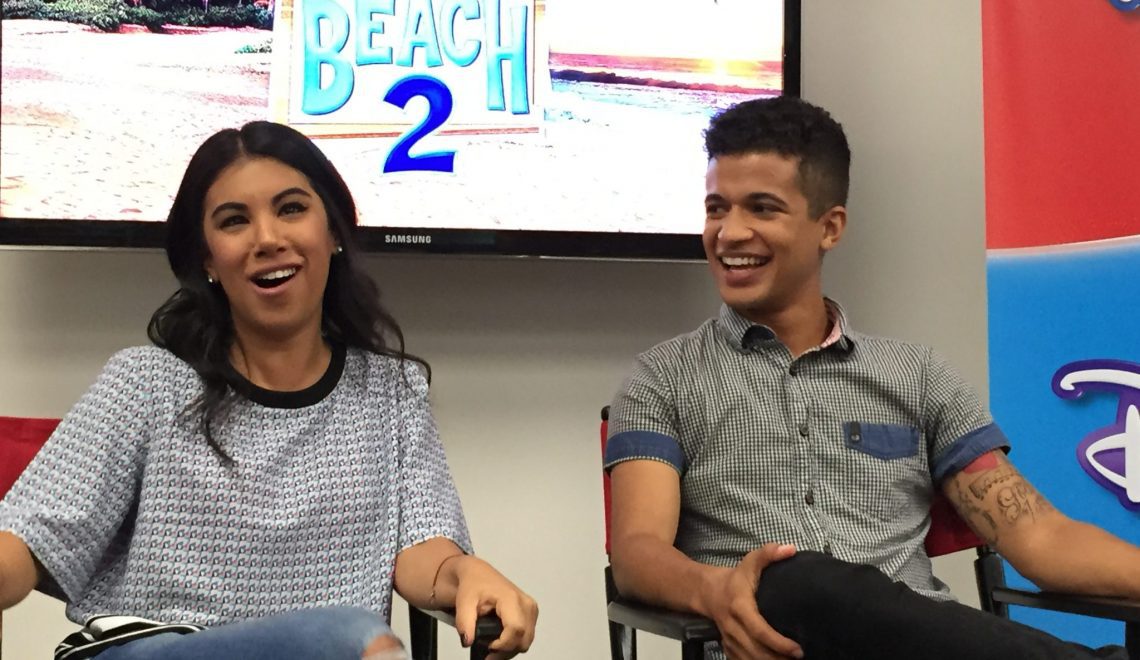 When you’re in a room with Chrissie Fit and Jordan Fisher, two of the dynamic stars in Teen Beach 2 which premieres on the Disney Channel on June 26, you can just feel like it’s going to be a great day- the electricity is all around you and contagious from the first moment you meet them. I was immediately struck by their aura of positivity and an unbridled enthusiasm for life and it filled the room from the moment they walked in. Unassuming and humble in every sense of the word, their love of life and their passion for what they do was apparent from the moment I sat down with them. On top of this add in the ability to sing, dance and act and make it all look easy and you have a winning combination in every sense of the word. For both, even though performing was a part of their lives from very early on- for Chrissie it was singing and for Jordan it was dance; it was having a crush on someone that first brought them to the stage. For Jordan it all started with a crush on a girl

“I had a crush on a girl in the 5th grade who joined the Drama Club and so I knew I had to join the Drama Club I started acting and singing and dancing all on the same day when I was 10 just so I could be with her.”

Surprisingly, Chrissie’s road to performing was a similar one.

“That’s so crazy- I guess my acting story is similar to yours because in 5th grade this Spanish Teacher was doing this production and it was  a gypsy kind of dance, singing kind of thing. My crush was a 6th grader and I was like, ‘I need to be in this show.’ And I’m like, ‘Fall in love with me.’ So I went to the teacher, Ms. Sanchez.  ‘Ms. Sanchez can I be in the show?’ “Um you’re a 5th grader- no- there’s no roles.’ So I went home and talked to  my neighbor who was in the show and I asked her if I could see the script. I read it and I noticed there wasn’t a bad girl in it and I thought to myself ‘Well there has to be a bad girl.’  The next day I went back to Ms. Sanchez and I said, ‘Can I play a bad girl?’   I pitched her an idea. And she– I don’t know if she felt sorry for me or she like was impressed that I took this initiative but she put me in the show. The guy didn’t fall in love with me I fell I love with acting.” I was curious as to what came first for them-the singing or the dancing. Chrissie shared

“Well I am not a professional dancer, although Teen Beach 2 makes me look like one. I am Cuban. So I grew up in a household where we were dancing Salsa, Meringue and all the rest of the dances made it a very dance kind of loving family. I was a singer and then I became an actress so I don’t really have a dance background. I think I learned the most doing Teen Beach Movie and I appreciate it so much. I feel like I’m in awe of these guys that really can actually dance.” For Jordan however, it was a different road that brought him to the world of acting. Born in 1994, Fisher was diagnosed in the hospital with nerve damage and had a temporarily paralyzed right arm. Right from birth he had to begin physical therapy and despite this rough start, at age two, began taking gymnastics. By ten years old, he garnered many gold medals in the South Eastern Region Men’s Gymnastics. He joined a local theatre company in Birmingham called the Red Mountain Theatre Company and it was there his gift for acting, singing and dancing was nurtured.

“It’s a different kind of dynamic. You know you walk into a rehearsal full of a bunch of people that you watch on ‘So You Think You Can Dance’ and you have these incredible choreographers and incredible dancers and you walk in and even though I’m an actor I can still walk in and think okay here we go – let’s get this going.”

What kind of advice would the two give to aspiring singers, actors and dancers wanting to get into the business? Fisher started by sharing:

“This was the advice that I typically started out with – have an idea of what you want to do and where you want to go. There are a lot of people that come out to L.A. and move to New York with the idea of becoming famous. Typically those people don’t find success in their field because their passion is driven from a very different place. The people that really, really do what they to get to do it because they love it and they in turn, are the ones that tend to find success. People gravitate towards people that are like-minded. So understand why you’re doing it first. Secondly and it’s cliché and you’re going to hear it at times, but I just don’t take no for an answer. One of my favorite songwriters of all time is Diane Warren. She’s written with everybody from Cher to Beyoncé’ and she wrote ‘If I Can Turn Back Time.’ She has not had to write a song for anybody for 20 years and she has made more money than you could ever, ever even dream of but she’s still pitches. She writes songs every day. That’s just what she does because she loves it.  She’s a pitch queen and that hustle started when she was 17 and that hustle started then and it never stopped. The reason being is because she loved doing what she did. She couldn’t imagine a life where she wasn’t writing songs and making music. It was that and that hustle and drive that turned her into a multi-billion dollar  incredible song writer that doesn’t have to work a day for the rest of in her life, but will until the day she dies. Those are the people that find success and it’s also true in likeminded people.”

Chrissie quickly added in “ I would also say it’s in this kind of world it’s not a sprint, it’s a marathon. Have patience and educate yourself. Not just with what you know but with the craft that you want to do. Even with acting, dance and music stay in school and make sure you get your education. So much of my artistic and the choices that I’ve made have come through the education. Really apply yourself; give everything you do 100% because then it’s more likely that the thing that you invest the most time in you’ll give 110%. Don’t give up. Keep it up.”

It was apparent that the importance of education was something they both felt with all of their hearts as when I jokingly asked if they would relay that message to my youngest son, also an aspiring dancer, they later got on the phone with him and talked to him about just that and encouraged him  follow his passion and his dreams but to make sure he got his college degree too. Just that small act of kindness will be something that will stay with both of us for many years to come and made a huge impact on him and his own future. What was the rehearsal process and preparation like for Teen Beach 2?

Jordan explained “We conditioned for a month and then we did choreography for about 3 weeks here in L.A. After that we moved t to Puerto Rico, where the movie was filmed and we rehearsed there for another week or two. Honestly most of the time that we spent in studios were conditioning and the choreography happened closer to the end. Because so much time is spent on the beach and different terrains and different weather you have to condition to be able to do it but all  of that conditioning is what put us in top physical shape ever.” Chrissie however, because she was filming “Pitch Perfect 2” at the time all the conditioning and choreography was taking place, was quick to add in “I was not in top physical shape. So I missed all their rehearsal and conditioning. I was eating Jambalaya and Crawfish. I would get videos sent by them of the choreography and kind of in between takes have to learn the choreography which was in the movie. It’s incredible and it’s very fast and it’s really kind of just like on another level. So I didn’t really get to condition but I commend them so much because they did so much work beforehand and I kind of just like skated in and got 3 hours of practice and said OK guys, let’s do this.”

“It was a very open set and everybody was very open to our input because ultimately we wanted to make the best movie possible. I’m really proud of this movie not just because of the spectacle. Yes it’s bigger than Teen Beach Movie and it’s better from the music to the dancing no but aside from all of that,  there are so many wonderful messages in this movie. I’m a big supporter of female empowerment and we’re seeing these two girls, Mac and Lela, have an actual friendship and not compete against each other for something. I feel that it’s really important for our young girls to see that and know that there are healthy friendships and relationships. Even with Ross and Garrett, their characters show that their friendship is such an important message in this movie. They both help each other figure out and work through what they might have felt insecure about, which is also the thing that kids need to see is possible-to be there for your friends no matter what. So aside from all of the great musical numbers and the dancing I feel that this is a great movie for kids because it just shows you how important friendship is and it shows you that it is possible for girls to have a healthy and positive friendship with other females. Most importantly, it teaches you to totally to believe in yourself. All of the characters show that you can be open and positive when you know we have that support. It’s a system and it‘s up to moms and dads to encourage their kids to know you can do this. You can believe in yourself and you have the support system. So I think that that’s like the biggest thing that comes out of this movie.” Coming away from talking to Chrissie Fit and Jordan Fisher, you take away a sense of feeling that you can do anything you want to do when you believe in yourself and have the support and the courage to follow your dreams. I came away smiling and feeling good not just about myself, but about life in general. There’s good things coming around the bend. It’s time to write your own story and make your own destiny. Get ready for Teen Beach 2. With its multigenerational appeal, lighthearted humor, incredible music and dance numbers that will stay with you long after the movie is over, it’s the perfect movie choice that the entire family can enjoy together.Teen Beach 2 premieres on The Disney Channel on June 26. Get the exclusive all access pass to everything Teen Beach 2! Catch the Back to the Beach preview special Friday June 19 on Disney Channel.