I’m Heading To The #TomorrowlandEvent! 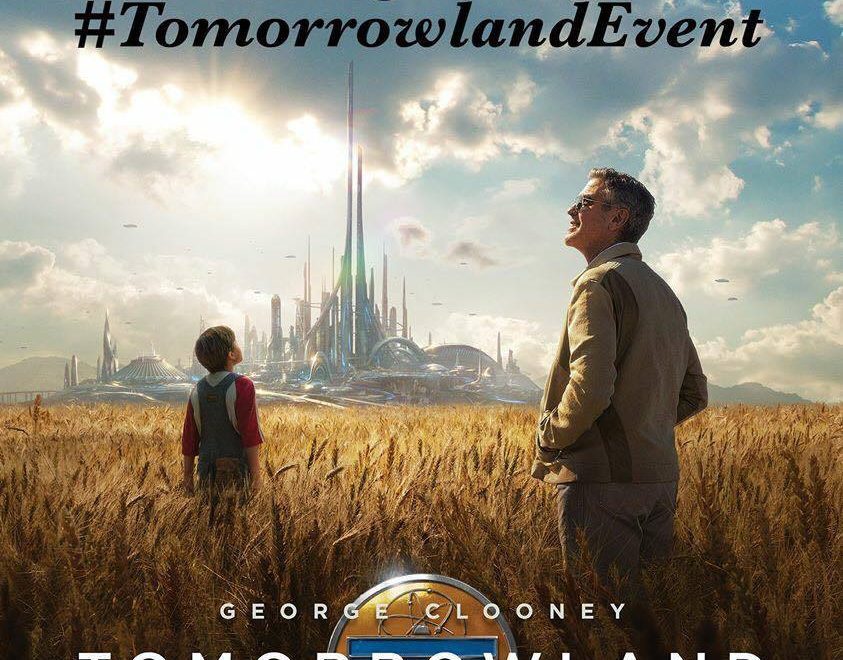 Last week I opened my email and the shrieks could be heard around the world-Disney is hosting an exclusive event in May…and I am one of 25 lucky bloggers who will be heading to Los Angeles to take part in it. And the reason for the screams, (although truth be told any email that starts with “Disney would like to invite you” is immediate cause for tears, screams, and then followed by being at a complete and total loss for words, and I am never at a loss for words) –as part of the trip we will be attending a special screening of Tomorrowland, which opens in theaters everywhere May 22 and which stars, wait for it, George Clooney and Hugh Laurie and directed by Brad Bird. Did I mention that this movie stars George Clooney? (Insert more screaming). While we’re in town, we’ll be visiting the Disney Archives to learn about Walt’s vision of “Tomorrowland” and what trip would be complete to Los Angeles without a visit to Disneyland! Take a look at the latest trailer from “Tomorrowland” Disney’s riveting mystery adventure “Tomorrowland,” where a teen bursting with scientific curiosity and a former boy-genius inventor bound by a shared destiny embark on a mission to unearth the secrets of a place somewhere in time and space that exists in their collective memory. Preserving our legacy is something taken very seriously at The Walt Disney Company. In fact, for more than four decades, the Walt Disney Archives has carefully safeguarded the most treasured items from Disney’s fabled history.

The Walt Disney Archives had its beginning in 1970 — while Disney was still reeling over the passing of its founder, Walt Disney. At the time, Walt’s brother and the Chairman of Board Roy O. Disney, wanted to ensure that as key imagineers and animators began to retire, their vast knowledge of Disney history was not forgotten.

Disneyland-The Happiest Place on Earth–  with of course a visit to Tomorrowland. Always curious and thinking about progress, Walt Disney created Tomorrowland as a window to the future, a place to educate and inspire guests. Tomorrowland opened as one of five original lands at Disneyland Park on July 17, 1955, and has had more attractions than any other area in the park. Today, Tomorrowland is home to attractions such as Space Mountain, a thrilling high-speed journey through outer space; Star Tours: The Adventures Continue, a 3-D motion simulated space flight with more than 50 different story combinations, and Buzz Lightyear Astro Blasters, an interactive adventure through the world of Buzz Lightyear. Tomorrowland Theater occasionally offers movie previews where right now guests can get a special sneak peek of “Tomorrowland” with special in-theater effects. Disney California Adventure Park will offer us a little #FrozenFun “Frozen Fun” is a big hit at Disney California Adventure park, bringing guests into the story of Disney’s animated blockbuster film, “Frozen.” Anna and Elsa are receiving visitors in their elegant greeting location, “Anna and Elsa’s Royal Welcome.” Guests can sing-along at “For the First time in Forever – A Frozen Sing-Along Celebration,” where Anna, Elsa and Kristoff take part in a lively retelling of their story with popular songs from the movie. Everyone’s favorite snowman, Olaf, is ready to give a warm hug to guests of all ages. There’s a lot of “Frozen Fun” to be had, now through May 15. And Southern California residents can purchase tickets at special prices through May 20.

Don’t forget that Disneyland is about to celebrate 60 years of magic beginning May 22, 2015, make way to the Disneyland Resort Diamond Celebration, where Guests of every age can salute 60 years of Disney magic with dazzling entertainment and sparkling surprises, including 3 new nighttime spectaculars making their in-park debuts!

Stay tuned right here as more details come in and be sure to follow our special #TomorrowlandEvent on as we take you to “Tomorrowland” and get social by following:

Disney has invited me to Los Angeles to attend a screening Tomorrowland. All expenses have been paid for by Disney but all opinions are always 100% my own