The Nightmare Before Christmas, Hocus Pocus And Coco Are All Returning To Theaters For Limited Engagements This Halloween Weekend 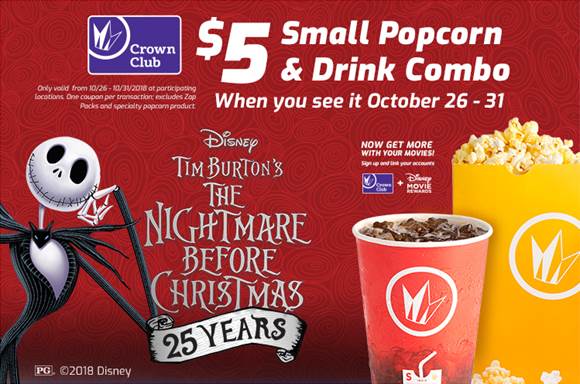 This Halloween weekend get ready to grab the family and run, do not walk to your nearest movie theater, because The Nightmare Before Christmas, Hocus Pocus And COCO are all returning to a theater near you for a special limited time engagement. If you’re like our family, Nightmare Before Christmas and Hocus Pocus are holiday classics and last year COCO captured our hearts but the only way to truly see these Halloween holiday treasures is on the big screen. There’s just something magical about immersing yourself in the world of Jack Skellington or feeling the spelltacular Sanderson sisters or remembering that family traditions are everything as reminded of our family that lives on in our hearts in COCO and now for a limited time you can do just that.

Starting with this Halloween weekend, Friday, October 26th – Wednesday, October 31st, you can celebrate the Halloween holiday with Jack Skellington, Sally, Oogie Boogie and more as Disney’s beloved classic THE NIGHTMARE BEFORE CHRISTMAS returns for a limited engagement exclusively in over 300 Regal cinemas locations nationwide! And last but by no means least, relive the magic of Coco. As anyone will tell you, when it comes to the telling of a story, no one does it quite like the good folks at Disney•Pixar and never is this more true than in their the new Disney• Pixar movie Coco.

Quite simply, it is a movie about family and for the family.  In a way that only the storytellers at Pixar can do, they have captured emotions that each and every one of us have felt at some point in our lives, and told the tale in such a way that it will have you leaving the theater feeling as though someone just threw their arms around you and embraced you in the biggest, warmest hug ever, and showed you that you were loved. It is a movie that in the simplest and most complex ways, celebrates the family, what it means to be family and more importantly the legacy and traditions that we leave behind that become a part of the generations to come, long after we have gone. Friday, October 26th – Thursday, November 1st, The Academy Award® winning film (Best Animated Film, Best Original Song) COCO is back in theatres for a limited engagement exclusively at Cinemark theatres! For Cinemark tickets and information visit https://www.cinemark.com/coco . This Halloween weekend, make it one to remember and treat your family to these movie classics.