Grab The Popcorn! Here’s What’s Coming To The Movies From Disney, Marvel and Lucasfilm In 2018! 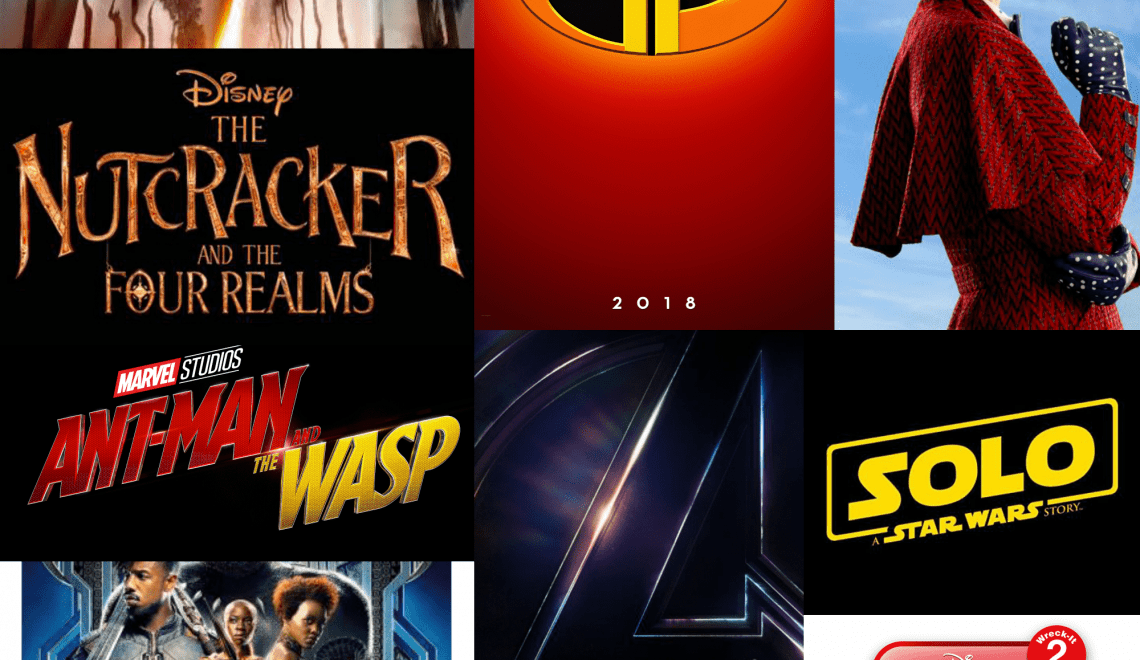 2018 is shaping up to be the best movie year ever! From a beloved children’s book brought to life to the ultimate Infinity War to the journey back in time to a galaxy far, far away to glimpse a look as to how our favorite rogue pilot came to be, to an Incredible movie about an Incredible family, to an iconic Christmas dance tradition brought to life to the return of everyone’s favorite Nanny, Mary Poppins and so much more, grab the popcorn, here’s what’s playing at the movies in 2018! Marvel Studios’ “Black Panther” follows T’Challa who, after the death of his father, the King of Wakanda, returns home to the isolated, technologically advanced African nation to succeed to the throne and take his rightful place as king. But when a powerful old enemy reappears,
T’Challa’s mettle as king—and Black Panther—is tested when he is drawn into a formidable conflict that puts the fate of Wakanda and the entire world at risk. Faced with treachery and danger, the young king must rally his allies and release the full power of Black Panther to defeat his foes and secure the safety of his people and their way of life.
“Black Panther” stars Chadwick Boseman, Michael B. Jordan, Lupita Nyong’o, Danai Gurira, Martin Freeman, Daniel Kaluuya, Letitia Wright, Winston Duke, with Angela Bassett, with Forest Whitaker, and Andy Serkis. Marvel Studios’ “Black Panther” hits U.S. theaters on February 16 From visionary director Ava DuVernay comes Disney’s “A Wrinkle in Time,” an epic adventure based on Madeleine L’Engle’s timeless classic which takes audiences across dimensions of time and space, examining the nature of darkness versus light and, ultimately, the triumph of love. Through one girl’s transformative journey led by three celestial guides, we discover that strength comes from embracing one’s individuality and that the best way to triumph over fear is to travel by one’s own light.
Directed by Oscar® nominee Ava DuVernay from a screenplay by Oscar-winner Jennifer Lee based upon the beloved novel by Madeleine L’Engle, “A Wrinkle in Time” star: two-time Academy Award® nominee Oprah Winfrey as Mrs. Which, Oscar winner Reese Witherspoon as Mrs. Whatsit, Emmy® nominee 2 Mindy Kaling as Mrs. Who, Gugu Mbatha-Raw as Mrs. Murry,Michael Peňa as Red and introducing Storm Reid as Meg Murry, with two-time Emmy winner Zach Galifianakis as The Happy Medium and Emmy nominee Chris Pine as Mr. Murry. Produced by Jim Whitaker and Catherine Hand with Doug Merrifield serving as executive producer. The Avengers are back and this time they are united to destroy a common enemy! Get ready as Iron Man, Thor, the Hulk and the rest of the Avengers come together to battle their most powerful enemy yet — the evil Thanos.

On a mission to collect all six Infinity Stones, Thanos plans to use the artifacts to inflict his twisted will on reality. The fate of the planet and existence itself has never been more uncertain as everything the Avengers have fought for has led up to this moment. Like all things from a galaxy far, far away, Solo: A Star Wars Story is still shrouded in mystery but here’s what we do know-or so we think. Solo: A Star Wars Story is the up coming film centering on  a young Han Solo, and perennial sidekick Chewbacca The film is produced by Lucasfilm from a screenplay by Lawrence and Jon Kasdan, and will be distributed by Walt Disney Studios Motion Pictures. The film is the second Star Wars anthology film, following the 2016 film Rogue One. A stand-alone installment, set prior to the events of the original 1977 film, it explores the adventures of a young Han Solo and Chewbacca, including meeting Lando Calrissian. The film stars Alden Ehrenreich as Solo, alongside Woody Harrelson, Emilia Clarke, Donald Glover, Thandie Newton, Phoebe Waller-Bridge, Joonas Suotamo and Paul Bettany and directed by the one and only Ron Howard. Everyone’s favorite family of superheroes is back in “Incredibles 2” –but this time Helen (voice of Holly Hunter) is in the spotlight, leaving Bob (voice of Craig T. Nelson) at home with Violet (voice of Sarah Vowell) and Dash (voice of Huck Milner) to navigate the day-to-day heroics of “normal” life. It’s a tough transition for everyone, made tougher by the fact that the family is still unaware of baby Jack-Jack’s emerging superpowers. When a new villain hatches a brilliant and dangerous plot, the family and Frozone (voice of Samuel L. Jackson) must find a way to work together again—which is easier said than done, even when they’re all Incredible. Ant-Man And The Wasp From the Marvel Cinematic Universe comes the latest chapter featuring heroes with the astonishing ability to shrink: Ant-Man and the Wasp. In the aftermath of Captain America: Civil War, Scott Lang (Paul Rudd) grapples with the consequences of his choices as both a superhero and a father. As he struggles to rebalance his home life with his responsibilities as Ant-Man, he’s confronted by Hope van Dyne (Evangeline Lilly) and Dr. Hank Pym(Michael Douglas) with an urgent new mission. Scott must once again put on the suit and learn to fight alongside The Wasp as the team works together to uncover secrets from their past. The Nutcracker And The Four Realms Now thanks to the imagination and magic of Walt Disney Studios, next November, families everywhere will be taken on a journey into this incredible world as Disney Studios brings to life the story of The Nutcracker And The Four Realms. The story tells the tale of young Clara and the one and only thing that  Clara (Mackenzie Foy) wants is a key – a one-of-a-kind key that will unlock a box that holds a priceless gift from her late mother. A golden thread, presented to her at godfather Drosselmeyer’s (Morgan Freeman) annual holiday party, leads her to the coveted key—which promptly disappears into a strange and mysterious parallel world. It’s there that Clara encounters a soldier named Phillip (Jayden Fowora-Knight), a gang of mice and the regents who preside over three Realms: Land of Snowflakes, Land of Flowers and Land of Sweets. Clara and Phillip must brave the ominous Fourth Realm, home to the tyrant Mother Ginger (Helen Mirren), to retrieve Clara’s key and hopefully return harmony to the unstable world.

Starring Keira Knightley as the Sugar Plum Fairy and featuring a special performance by Misty Copeland, Disney’s new holiday feature film “The Nutcracker and the Four Realms” is directed by Lasse Hallström and inspired by E.T.A. Hoffmann’s classic tale. In theaters on Nov. 2, 2018.

The Nutcracker And The Four Realms dances into theaters November 2, 2018 Our beloved Ralph is back bringing with him the old gang, including all of the Disney Princesses as our bumbling hero returns in Pixar’s Ralph Breaks The Internet: Wreck It Ralph 2. Taking place six years after the events of Wreck-It Ralph the Sugar Rush arcade cabinet has broken, forcing Ralph and Vanellopeto travel to the Internet via the newly-installed Wi-Fi router in Litwak’s Arcade to retrieve the piece capable of saving the game. Ralph Breaks The Internet- Wreck It Ralph 2 wreaks havoc in theaters on November 21, 2018

And of course, we saved the best for last because just in time for Christmas, everyone’s most beloved nanny is back…. This Christmas get ready to relive the magic of everyone’s favorite movie as once again we return to Cherry Tree Lane. in the much-anticipated sequel to the original, Mary Poppins Returns. Mary Poppins Returns takes place 25 years after the original, which starred Julie Andrews in the title role and now portrayed with the same magical qualities by Emily Blunt,  when the character returns to the family when Michael, now grown up, suffers a personal loss in 1930s London. In a Depression-era London, a now-grown Jane and Michael Banks, along with Michael’s three children, are once again visited by the enigmatic Mary Poppins following this personal loss and it is only through her unique magical skills, and with the aid of her friend Jack, she helps the family rediscover the joy and wonder missing in their lives. Jack is brought to life by Lin-Manuel Miranda and together they join forces to take the children on an unforgettable experience. And there you have it. From superheroes to our favorite animated families to a beloved ballet to the return of everyone’s favorite Nanny, and so much more, mark your calendars, save the dates and stock up on popcorn because 2018 is shaping up to be the best movie year ever!