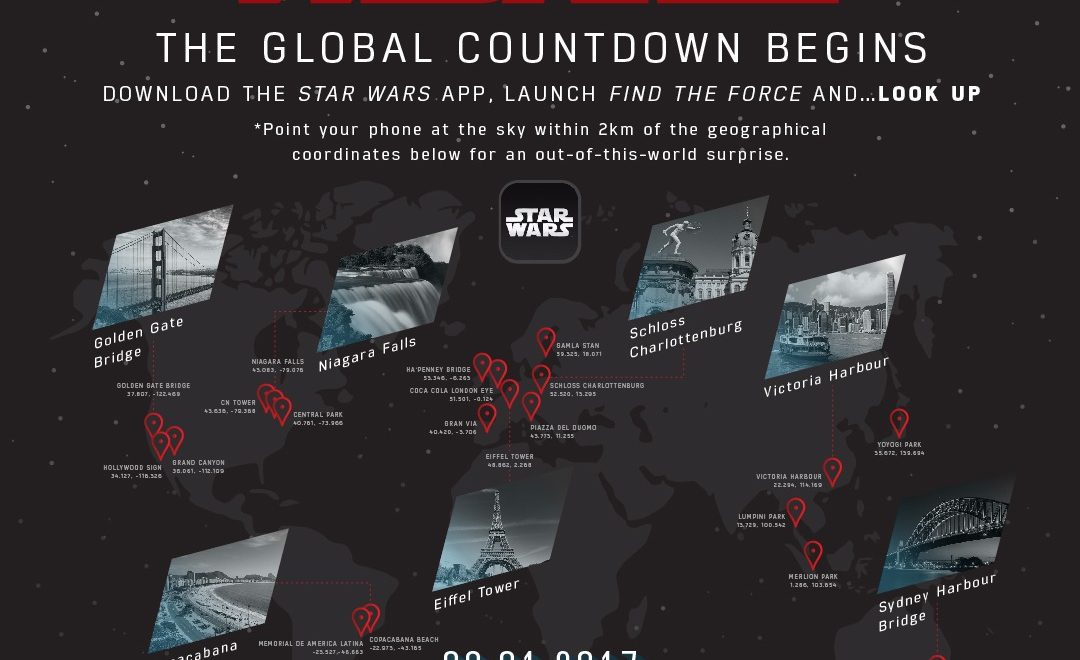 Get ready to head to a Galaxy far, far away-or as close as your local Disney Store or local landmark because the countdown is on for Star Wars Force Friday II. We will be there live on Friday night at midnight at the Disney Store in San Francisco taking you live as the clock ticks down to the start of Force Friday II begins while all around the globe Star Wars will augment reality getting ready for the AR Makeover of Sydney Harbor, Eiffel Tower, the Golden Gate Bridge, the Grand Canyon, Copacabana Beach, the Hollywood Sign, and Central Park. It is truly an event of global proportions as fans from far and near gear up to “Find the Force” in global augmented reality treasure hunt to celebrate the launch of the new product line for Star Wars: The Last Jedi Disney and Lucasfilm today kicked off the countdown to Force Friday II, the global event celebrating the launch of the products from Star Wars: The Last Jedi, with an AR surprise for Star Wars fans around the world. Fans within a mile of 20 global landmarks simply open the Star Wars App, select Find the Force and point their phone to the sky to see a short augmented reality scene unfold. The 10-second animation shows a Star Destroyer loom over key landmarks as two TIE Fighters shoot past into the distance. “This Force Friday II weekend, we’re inviting fans and families to join the Resistance and help ‘Find the Force’ in our global augmented reality treasure hunt taking place across more than 20,000 retail locations. We’re kicking the event off with an extra AR surprise for anyone near 20 of the world’s most iconic destinations. Just open the Star Wars App – and look up!,” comments Paul Southern, Senior Vice President, Global Licensing at Lucasfilm. Fans with the Star Wars App near one of the 20 landmarks can take pictures of the AR scene and join the social conversation using #FindtheForce and #ForceFriday. Others can check out videos and photos of the scenes at starwars.com. Today through Sept. 3, fans can view the AR scene within a mile of the following geographical coordinates (there are apps and other mean to convert geographic coordinates to a point on a map):

The augmented reality adventure will continue through the weekend as Star Wars fans across the planet unite for Find the Force, the pop-up AR treasure hunt rolling out at 20,000 retail locations around the world for Force Friday II from Sept. 1-3. It will feature new and favorite Star Wars characters from the upcoming film via the Find the Force feature in the Star Wars App. More information and an early look at the new Porg characters in AR is available at www.starwars.com/findtheforce.

Fans can download the latest version of the Star Wars App (v. 2.3 or higher) beginning Aug. 24 for an early look at the new Porg characters in AR before the AR treasure hunt goes live at retail.

By sharing photos or videos featuring the in-store AR characters on Twitter or Instagram using #FindtheForce and #Sweepstakes throughout Force Friday II weekend, fans in select global markets can participate in a sweepstakes for the chance to win the ultimate fan experience: tickets to the Star Wars: The Last Jedi premiere in December.

More information about Find the Force and a how-to video is available at www.starwars.com/findtheforce.

STAR WARS: THE LAST JEDI OPENS IN U.S. THEATERS ON

Use The Force And Find Out All Of The Latest Star Wars News!

Fans should be careful when using the app. Always watch your surroundings and remain aware of hazards, including other pedestrians, traffic, and obstacles. Do not use the app when driving a car. Do not access private property or other inappropriate or unpermitted locations. Parents should guide and supervise their children’s use of the app at all times.