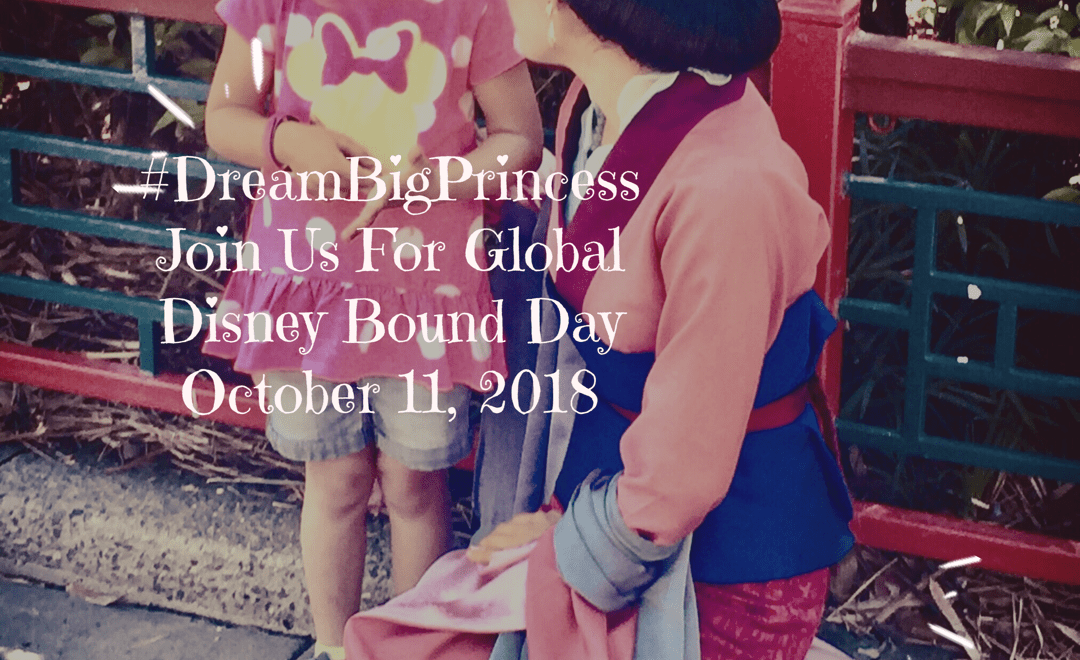 On October 11, you can be a part of the magic and help to inspire and encourage the next generation to believe in the possibilities and live their dreams by joining the #DreamBigPrincess Global Disney Bound at Disney Parks worldwide in honor of International Day of the Girl. My dad was way ahead of his time back in the day. I was never, once referred to as “Daddy’s Princess” or “Daddy’s Little Girl” but instead I instilled with a sense that  I could do anything, and not once did it ever occur to me that at the time, because after all, this was the 50’s and the 60’s, that only boys were encouraged to live out their dreams and there was no reason that I couldn’t and shouldn’t be anything that I wanted to be. Growing up, my dad raised me to view the world as Mulan would have viewed the world -to believe that there wasn’t anything that I couldn’t do, that the world was mine for the taking and that through hard work, dedication and determination, it was me and me alone that determines not only my future but the legacy that I would leave behind.  Quite simply the discussion of “but I’m a girl” never once came up because, in my father’s eyes, I was a PERSON who could change the world or anything in between. I was always encouraged and expected to think outside the box, to do more than I could ever believe possible and to not just survive in life but thrive in life. Quite simply, he saw me, and my potential as an equal, a spirit that continues to live on in me to this very day, When I became a mommy and an educator, I tried to continue this way of looking at life by handing this legacy down to my own children as well as the students in my class and tried to teach them to allow their passion to lead their lives and that any dream was possible, if you truly believed and it is a spirt I now see being passed on from my sons to their own children. It was what propelled and motivated my daughter to follow the only dream she ever had which was to become a chemist and create a drug that would help people to live longer and after years of hard work and determination, saw her be an integral part of the development team that created the vaccine for Hepatitis C. Although we lost my daughter earlier this year, her legacy will forever live on in not only through all the lives that will be saved because through hard work, determination and the undeniable faith in herself that she could and would achieve her dream, but through her example, the girls inherited the sense that they too could do anything. This year, Disney’s “Dream Big, Princess” campaign will use the stories of fictional heroines like Moana and Tiana, and real-life role models to encourage kids around the globe to follow their dreams. The new #DreamBigPrincess video series puts the next generation of female storytellers behind the camera to tell the stories of inspirational role models. On October 11, declared the International Day of the Girl by United Nations, Disney is inviting guests at Disney parks around the world to Disney bound in outfits inspired by their favorite female Disney characters, following the special events costume guidelines at each Disney resort location.* Whether your favorite character is clever, kind, compassionate, creative, adventurous, ambitious, fearless, confident, brave – or all of the above! – we want to see you celebrate their iconic style and spirit. Disney bounding can include color schemes, patterns, accessories and more that speak to your favorite character. Need some inspiration? Check out some of the looks available on Disney Style or Forever Disney. There are so many empowering female characters to choose from. If you can’t choose just one (we definitely can’t), team up with friends and family to celebrate an entire group of them! And who knows, you might just find yourself featured on the Disney Parks Blog in your Disney bound best. And stay tuned for the premiere of the #DreamBigPrincess video series this month, celebrating the inspiring stories and words of advice from female trailblazers across industries and around the world, captured by 21 talented young women from 13 countries. From October 10 – November 20, 2018, for each like or share of a public video or photo with #DreamBigPrincess on Facebook, Instagram or Twitter, Disney Worldwide Services will donate US $1 to Girl Up, the United Nations Foundation’s program supporting girls’ leadership and empowerment (minimum donation: $500,000/maximum donation: $1 million). For more information about Girl Up, go to girlup.org. *While we encourage creativity, we also value safety and good judgment. Please take a moment to read through the latest park rules and attire guidelines for your Disney resort destination when planning your Disney bound look. How will you touch the future and empower not just girls but each and every child to dream big and to believe in the possibilities and live their dreams?  Make a difference and join in with us and the #DreamBigPrincess beginning tomorrow, October 11. After all “Anything is Possible, If you Believe…”