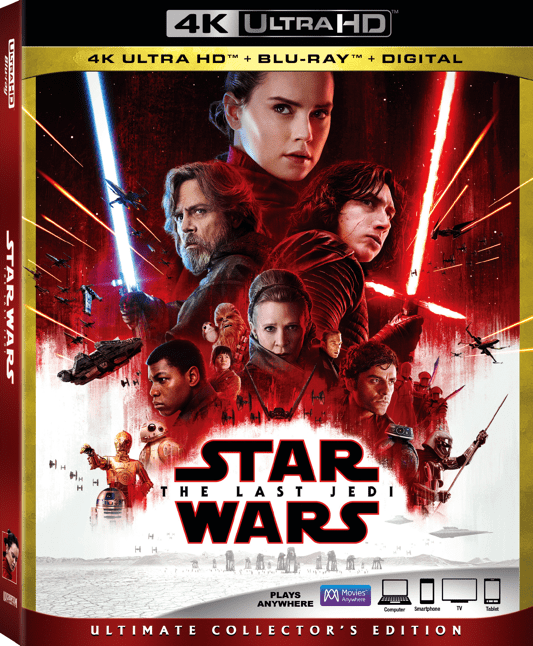 The wait is over! Now you can bring The Force home for your family tomorrow with the long-awaited release of the Lucasfilm’s Star Wars: The Last Jedi—the next action-packed chapter of the Star Wars saga can be yours in Blu-ray & 4K. The visually stunning film welcomes the return of original characters, including Luke Skywalker, Princess Leia, Chewbacca, Yoda, R2-D2 and C-3PO and further explores the deepening journey of the saga’s new members, Rey, Finn, Poe, and Kylo Ren. Star Wars: The Last Jedi is everything you hoped it would be, dreamed it would be and wanted it to be and so much more.

The movie is reminiscent of The Empire Strike Back and covers every emotion. You’ll laugh more than you’ve ever laughed during a Star Wars movie, yes you’ll cry more than once, you’ll scream, you’ll cheer but mostly you’ll have the best time of your life on this E-Ticket, roller coaster, hang onto your popcorn ride of a movie.

It’s a buddy picture in ways never expected. It’s about the love of family and most importantly it continues the fight of good vs. evil, light vs dark and makes you question just where the lines are drawn as to what divides and has you rethinking everything you thought you knew and sends your minds spinning as you come out with many more questions than you went in with.  It’s the kind of movie that you need to see at least twice, and possibly a third just to process everything and let it all sink in.

The new characters fit in with the story so seamlessly it’s almost as if they were the missing pieces of a puzzle that you’d been looking for all along and the beloved characters of the past make you fall in love with them all over again. And then there’s the Porgs….rest assured that they are in no way the new Jar Jar Binks of the Star Wars Universe and yes, you are going to need one.   But the most important thing that you need to know about Star Wars: The Last Jedi is that you have to see it for yourself- it’s just that simple!

In Lucasfilm’s Star Wars: The Last Jedi, the Skywalker saga continues as the heroes of The Force Awakens join the galactic legends in an epic adventure that unlocks age-old mysteries of the Force and shocking revelations of the past.

It is filled with nonstop action starring Mark Hamill in a way that you have never seen him and quite possibly the best role of his life and yes will tug at your heartstrings with Carrie Fisher’s last screen performance.  Benicio Del Toro portrayal is absolutely spot-on perfection and you can’t help but cheer for Kelly Marie Tran. The interactions between Daisy Ridley and Adam Driver leave you wanting more, more, more and John Boyega portrayal is the “never say die” good guy that every adventure movie needs and where would the world be today without the incredible talents of Andy Serkis?
And the character that no one ever talks about when they talk about the Star Wars movies is the music and in my mind, that is the most important character of all. Where would the Star Wars sagas be if not propelled by John Williams’ iconic score that could and does tell the story all on its own? Admit it-from the moment you hear the very first note and the first strands of probably the most recognizable soundtrack in the universe, you’re already cheering.

“SOMETHING INSIDE ME HAS ALWAYS BEEN THERE, BUT NOW IT’S AWAKE.”

“HOPE IS LIKE THE SUN. IF WE ONLY BELIEVE IN IT WHEN WE CAN SEE IT, THEN WE WILL NEVER MAKE IT THROUGH THE NIGHT.”

“NO ONE’S EVER REALLY GONE.”

“THAT’S HOW WE’RE GONNA WIN. NOT FIGHTING WHAT WE HATE, SAVING WHAT WE LOVE.”

“WE ARE THE SPARK, THAT WILL LIGHT THE FIRE THAT’LL BURN THE FIRST ORDER DOWN.”

“MAY THE FORCE BE WITH YOU ALWAYS.”

Director Rian Johnson takes fans on an intimate journey into the creation of Star Wars: The Last Jedi in a feature-length documentary, explaining his unique interpretation of the Force, detailing the painstaking process of creating Snoke, and deconstructing action-packed scenes from the film such as the epic space battle and the final confrontation. Johnson also reveals two exclusive scenes, featuring Andy Serkis as Snoke prior to his digital makeover, as well as 14 never-before-seen deleted scenes, in addition to his audio commentary. o   Lighting the Spark: Creating the Space Battle – Get a close-up look at the epic space battle, from the sounds that help propel the action, through the practical and visual effects, to the characters who bring it all to life.

o   Snoke and Mirrors – Motion capture and Star Wars collide as the filmmakers take us through the detailed process of creating the movie’s malevolent master villain.

o   Showdown on Crait – Break down everything that went into creating the stunning world seen in the movie’s final confrontation, including the interplay between real-word locations and visual effects, reimagining the walkers, designing the crystal foxes, and much more.

With Easter just around the corner, how about some sweet Porg Easter Treats? You can download all free activity pages and Porg fun right here!

Stay up on all of the latest from Star Wars: The Last Jedi: