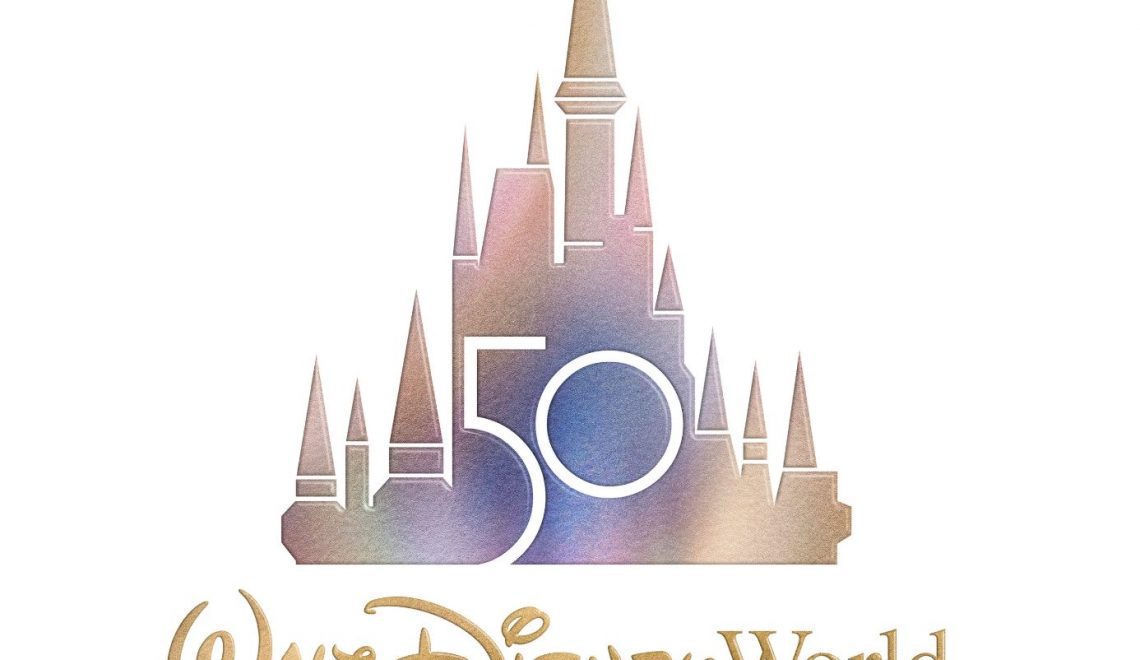 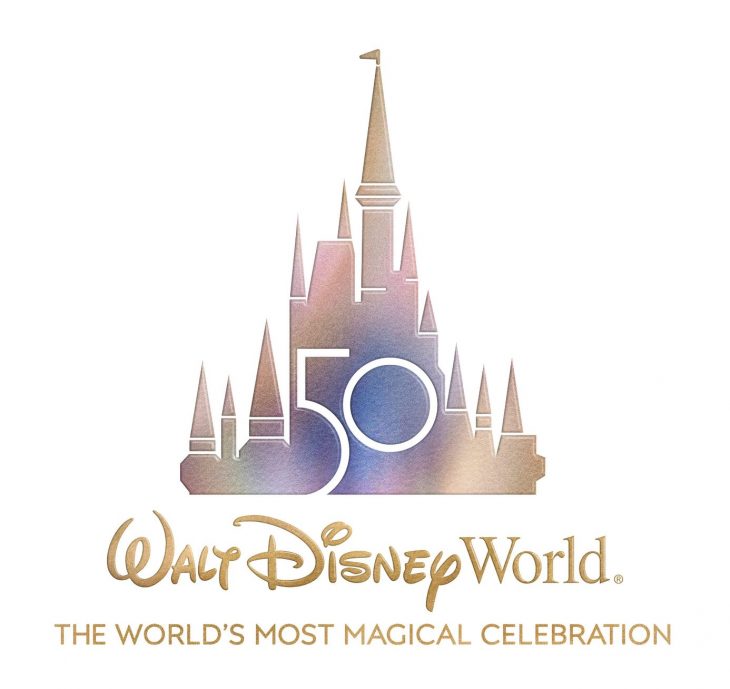 The wait is almost over as the countdown gets closer and closer to Disney World’s 50th Anniversary Celebration which begins on October 1 with extra magic throughout the Walt Disney World Resort.  Dubbed The World’s Most Magical Celebration, the 18-month-long event is set to bring new attractions, restaurants, day and nighttime entertainment, merchandise, specialty food items, and more to all four theme parks, plus Disney Springs and the resort hotels. And the best part is that Disney World’s 50th Anniversary Celebration will take over all four Walt Disney World theme parks. 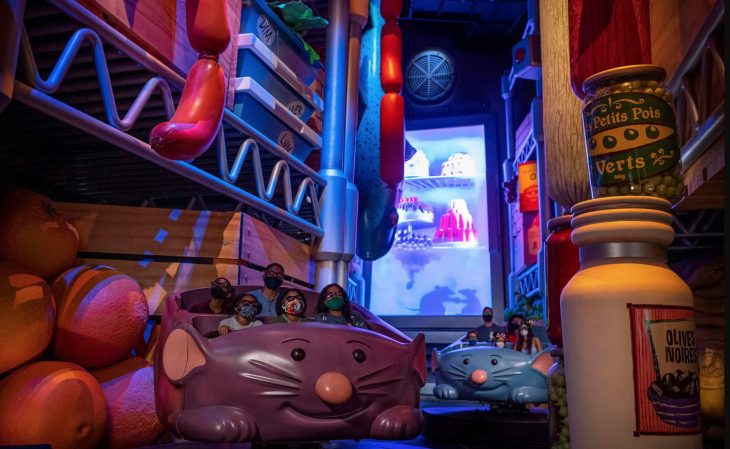 Starting October 1, Walt Disney World guests are invited to shrink down and see the world of fine cuisine through the eyes of our favorite little chef as you ride along on  Remy’s Ratatouille Adventure at EPCOT. The new family-friendly attraction is for the entire family and is designed to make guests feel like they’ve shrunk down to main character Remy’s eye level, with rat-shaped vehicles that scurry through  Paris and Gusteau’s Restaurant. As with the ever-popular Star Wars: Rise of the Resistance at Disney’s Hollywood Studios, the attraction will use a boarding group system accessible through the My Disney Experience app, starting at 7:00 am each day and then again in the afternoon, that will help guests reserve their spot in line. 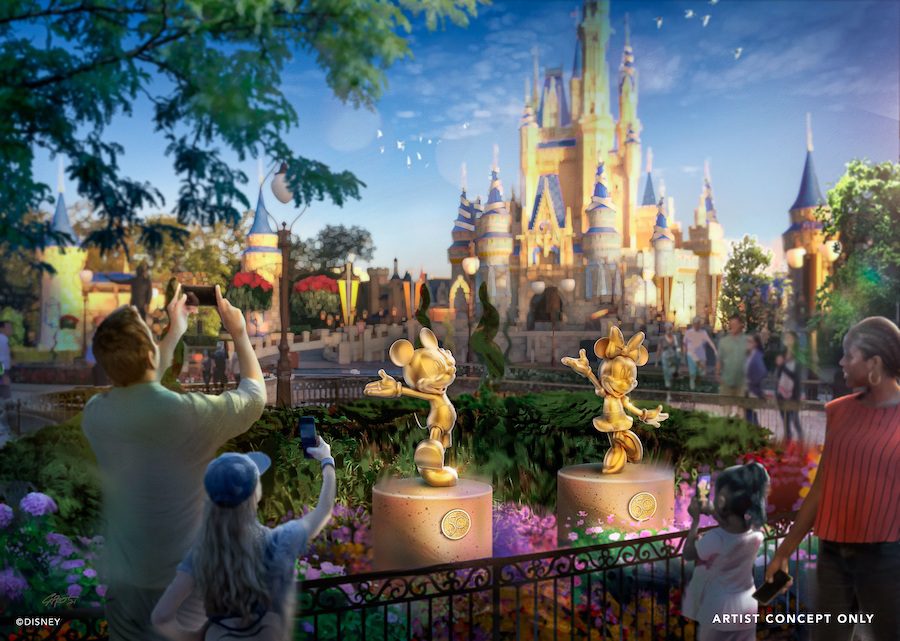 In honor of Disney World’s 50th Anniversary Celebration,  each park is will display the new “Fab 50” golden character statues, which can be found now throughout the parks. Located in gardens and green spaces. these magical statues are interactive and are sure to be at the top of the list when it comes to favorite photo spots. 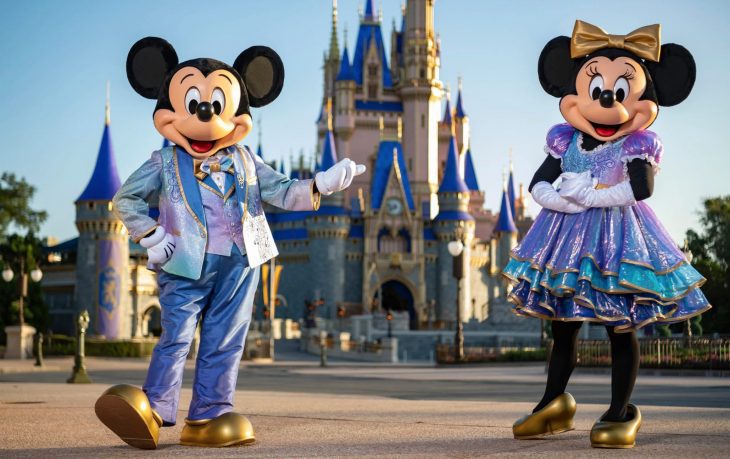 Also making their first appearance dressed in all-new outfits, designed especially for Walt Disney World’s 50th-Anniversary Celebration, Mickey, Minnie, and all of their friends will adorn their brand new golden wardrobe upgrade with outfits that sparkle with custom-made fabric and gold highlights. Making appearances at Disney’s Magic Kingdom throughout the day be sure to have your cameras ready to capture your favorites dressed in Disney World’s 50th Anniversary Celebration best. 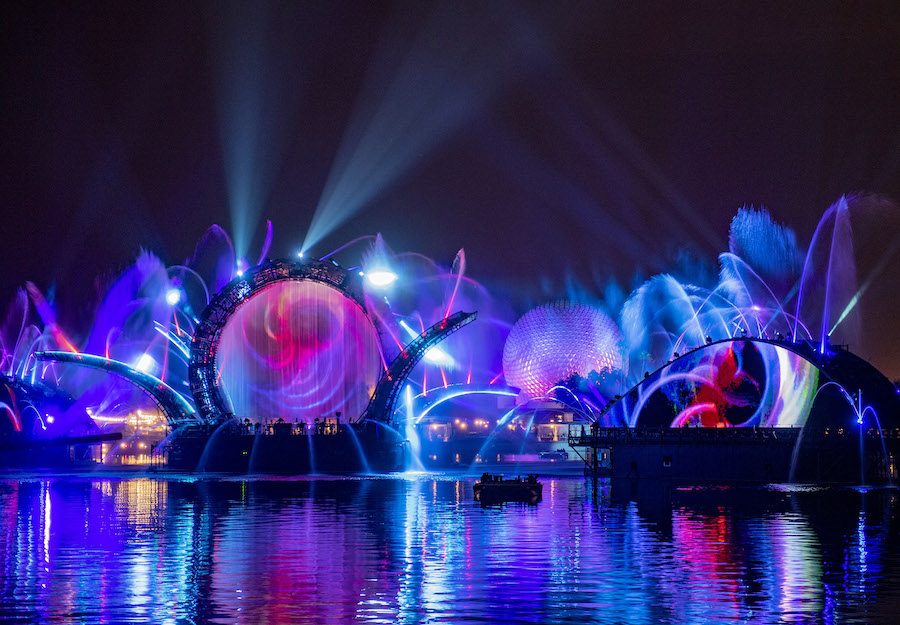 The much anticipated  Harmonious, takes over World Showcase Lagoon each night at EPCOT. New floating barges have custom-built LED panels that display iconic scenes from Disney movies such as  Hercules, Brave, Aladdin, and Mulan, with arrangements of classic Disney songs performed in a number of languages. Did you know that the soundtrack for Harmonious was produced remotely through more than 100 separate recording sessions in nine countries and five states? During the show, Disney fans will be treated to such favorite songs that include “How Far I’ll Go” from Moana, “Dig a Little Deeper” from The Princess and the Frog, and a rousing Lion King medley sung by the Ndlovu Youth Choir from Johannesburg. 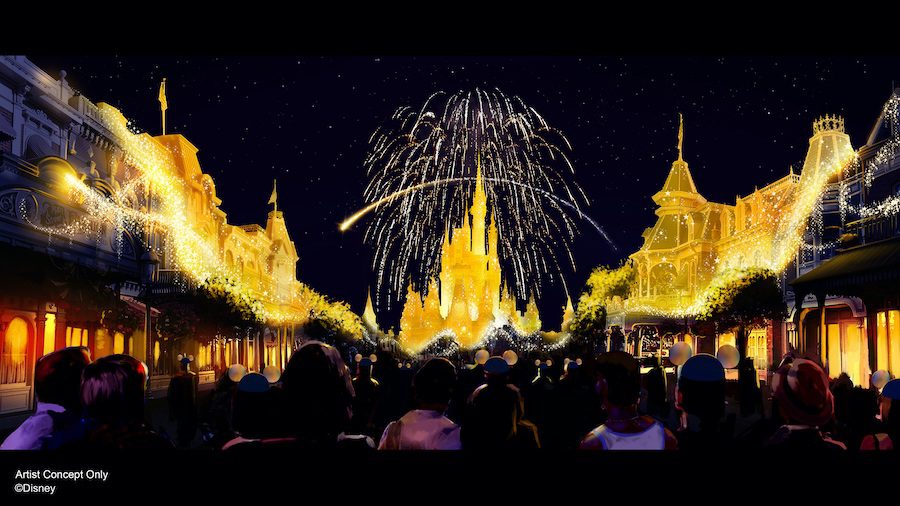 Over at the Most Magical Place on Earth, Disney’s Magic Kingdom, a new nighttime spectacular will take to the skies each night offering a new kind of magic for guests. Disney Enchantment will combine the much loved Cinderella Castle projections with new images running the length of Main Street U.S.A.,  that allows everyone to experience the show. Disney Enchantment features many of the beloved songs and characters from Disney movies including Alice in Wonderland, Beauty and the Beast, Tangled, Onward, Luca, and as well as new original music created just for the show. .And of course what would a Magic Kingdom nighttime spectacular be without  Tinker Bell as she flies high in the sky spreading her pixie dust during the show. 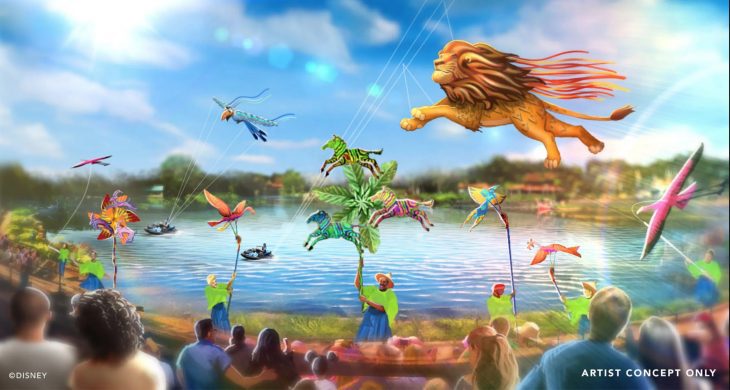 Over at Disney’s Animal Kingdom Theme Park, a new daytime show will make its debut. Disney KiteTails performed at the Discovery River Amphitheater the show will feature three-dimensional kites of characters such as Simba and Zazu from The Lion King and Baloo and King Louie from The Jungle Book as they fly overhead, as music from favorite Disney movies plays. 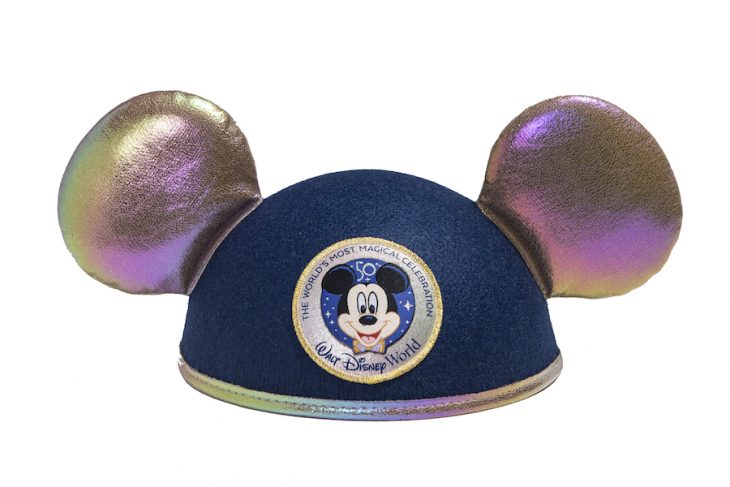 You’ll be able to take home some of the magic from Disney World’s 50th Anniversary Celebration with special merchandise that will be located throughout the parks. The new merchandise can be found at such stores as World of Disney at Disney Springs, The Emporium at Magic Kingdom, at the upcoming Creations Shop at EPCOT, along with stores at Disney’s Hollywood Studios and Disney’s Animal Kingdom Theme Park. The new merchandise has been split into five different collections that will debut at set times through the rest of 2021.  with the first three of the merchandise themes making their appearance on October 1 including the Celebration Collection, the Disney Castle Collection, and the vintage-inspired Vault Collection.

Some of the new magical merchandise is already in stores and this must-have pre-celebration collection features limited-time products, perfect for Disney fans who are visiting Walt Disney World Resort before the official 50th-anniversary festivities begin. If you’re an Annual Passholder, make sure to check out this special long-sleeve T-shirt exclusively for you. 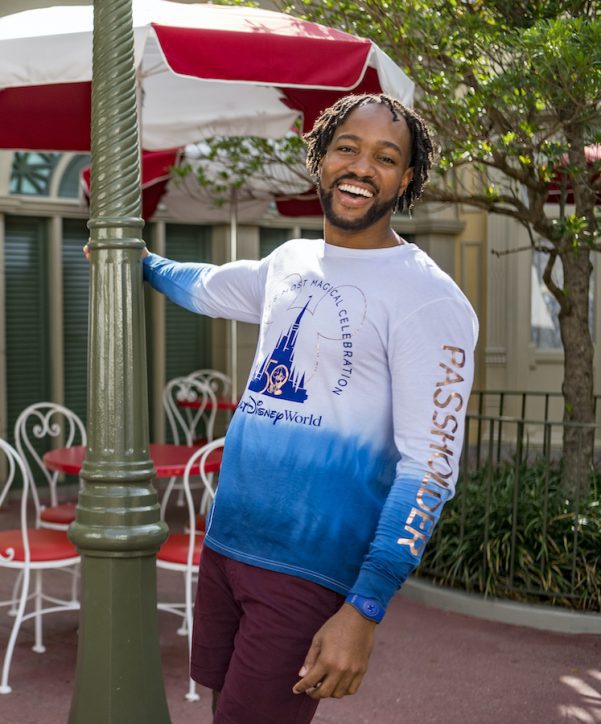 Launching at the start of the celebration, three new collections will appear across Walt Disney World Resort, with select items available on shopDisney.com. Two more 50th-anniversary collections will debut later this fall.

From accessories by Dooney and Bourke and festive headwear to coordinating mommy-and-me ensembles and – fan-favorite – a soap dispenser, the Celebration Collection offers a wide-ranging assortment of commemorative merchandise for the whole family, perfect for mixing and matching.

The iconic Magic Kingdom Park landmark, Cinderella Castle, serves as the inspiration behind this new collection. My favorite items include the collectible ornaments, the castle-themed mug and, of course, the light-up Minnie Mouse ear headband!

This collection is sure be a favorite among long-time fans. It offers retro-themed designs inspired by items from the Walt Disney Archives. Paying tribute to 50 years of Walt Disney World magic, the collection includes an assortment of opening-day favorites, such as a 2021 rendition of the original Mickey Mouse ear hat, throwback T-shirt styles, and vintage-inspired plush toys. And best of all, there’ll be more blasts from that past joining the collection as the celebration continues!

You may have noticed the new EARidescent décor on Cinderella Castle, and soon you will see more of it around Walt Disney World Resort in honor of the 50th anniversary. The latest color collection, which will debut in late October, is themed to match the EARidescent celebration and features everything from a mini-backpack by Loungefly and a Spirit Jersey to a set of sparkling Minnie ears. 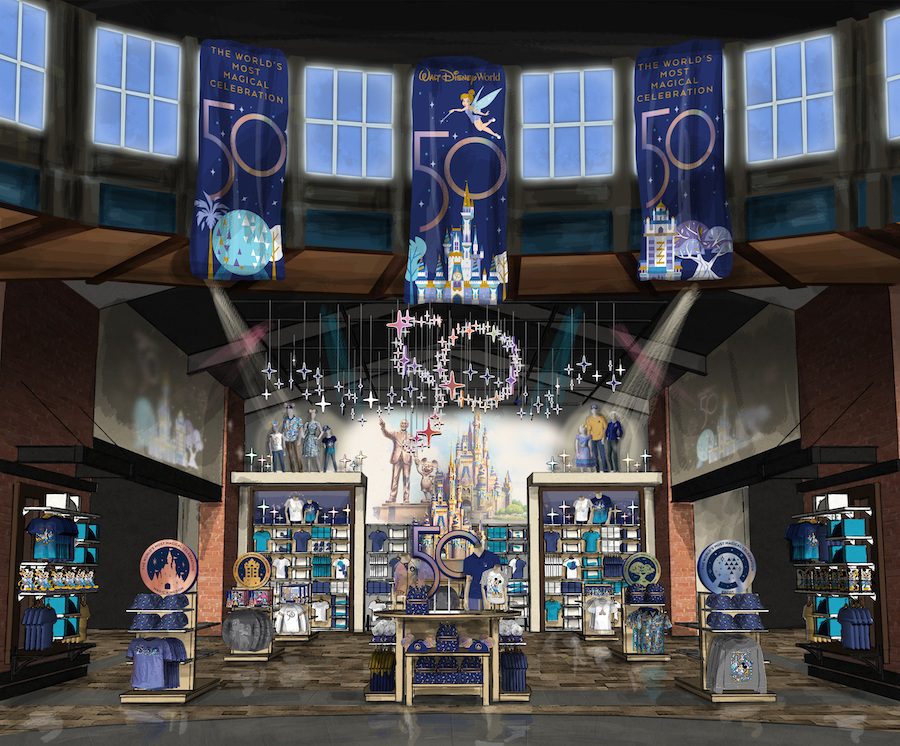 And there’s more to come! This fall, look for one-of-a-kind retail displays that will incorporate Disney storytelling into your 50th merchandise shopping experience. The imaginative displays will pop up at select merchandise locations across Walt Disney World, including World of Disney at Disney Springs. 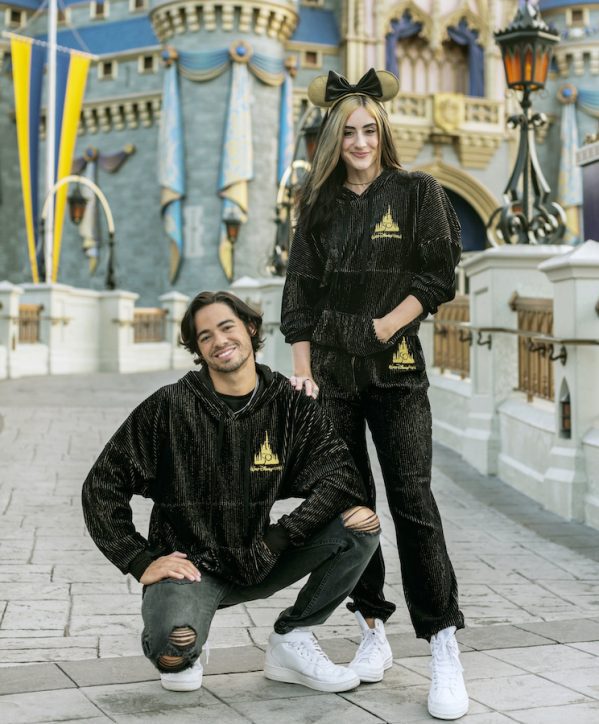 The rendering pictured above was envisioned designed by merchandise cast members Eric Rachaphoumy and Paul Seus. Keep checking back right here for the reveal details about the Luxe Logo Collection, a range of upscale pieces for the Disney collector that will debut in November.  Stay tuned for exciting updates about “The World’s Most Magical Celebration!” 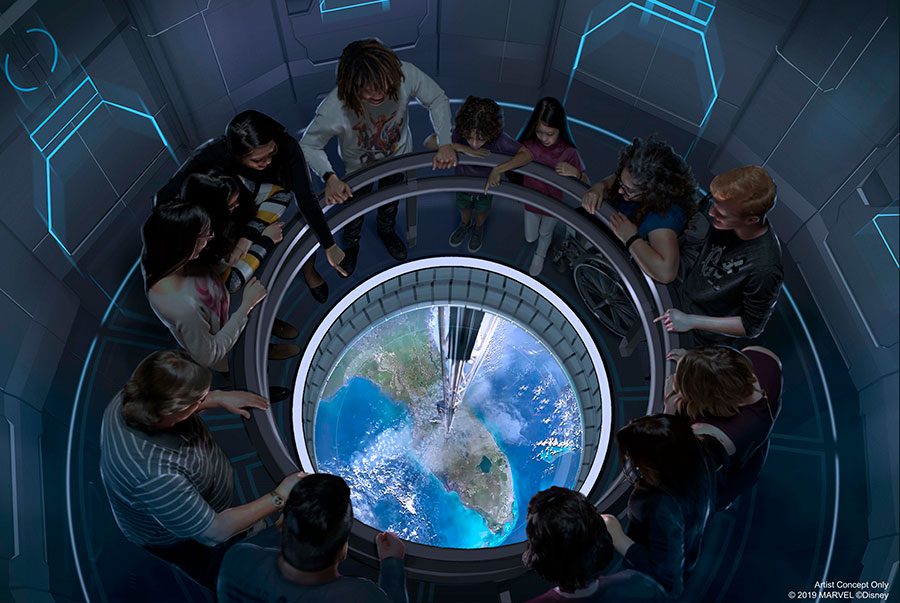 Two new dining experiences are planned for EPCOT for the celebrations. The first to open is the highly anticipated Space 220, which is located in Future World between Test Track and Mission: Space. The restaurant will feature a dining room with virtual windows that will give the feeling that you are truly are high above Earth as you look out into space. Space 220 will feature a prix-fixe menu for both lunch and dinner. Reservations are highly recommended and can be made via the My Disney Experience app. 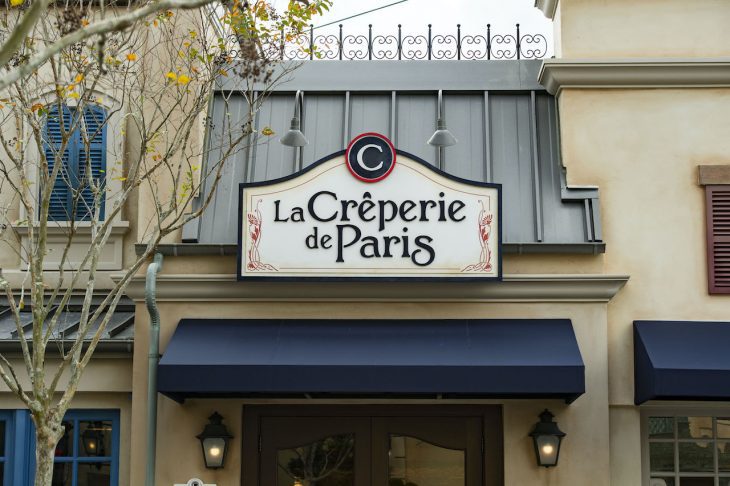 The second new dining experience is part of the France pavilion expansion called La Crêperie de Paris, which is just outside the entrance to Remy’s Ratatouille Adventure. The restaurant is both table service and quick service dining and features a mouth-watering menu filled with sweet crepes and savory galettes inspired by the Brittany region of France. The restaurant will also serve traditional Brittany hard cider. 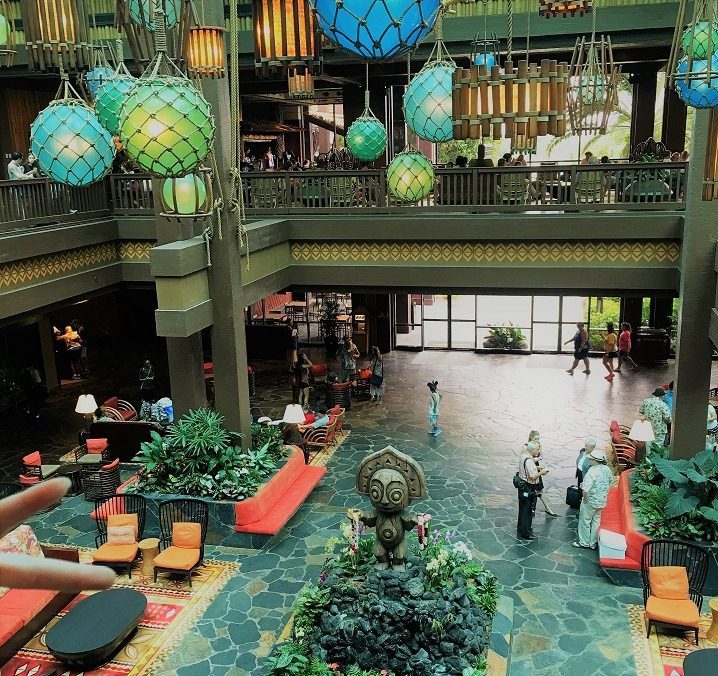 The celebrations extend to Disney hotels, too. Disney’s Polynesian Village Resort and Disney’s Contemporary Resort have new character-inspired rooms with Moana theming featured at the Polynesian and themes featuring The Incredibles at the Contemporary.   Reservations at both of these resorts tend to fill up fast, so be sure to book early. 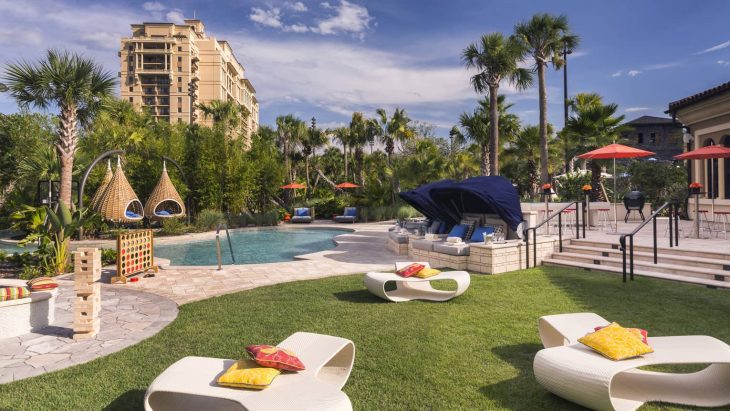 The Four Seasons Resort Orlando at Walt Disney World is also offering packages for guests planning on being in the parks for the festivities. The Ultimate Suites Experience and Top Floor Buyout package includes access to the nine-bedroom Royal Suite, four-bedroom Presidential Suite, and eight guest rooms. From the attached balconies guests will be able to see the EPCOT and Magic Kingdom firework shows. And just announced that when staying at one of these resorts during Walt Disney’s 50th Anniversary Celebration one of the perks of staying there will include opportunities to book private character experiences with Mickey Mouse or his pals. 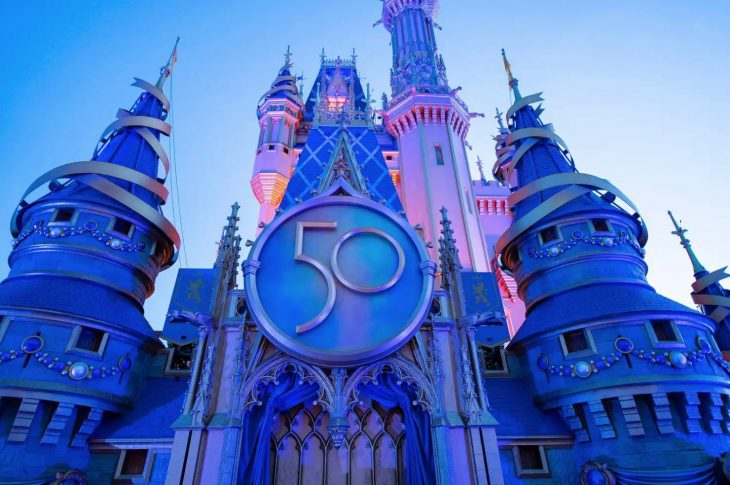 With so much happening at The World’s Most Magical Celebration, what are you looking forward to the most? Disney World’s 50th Celebration all begins October 1. Let the planning begin and See Ya Real Soon!