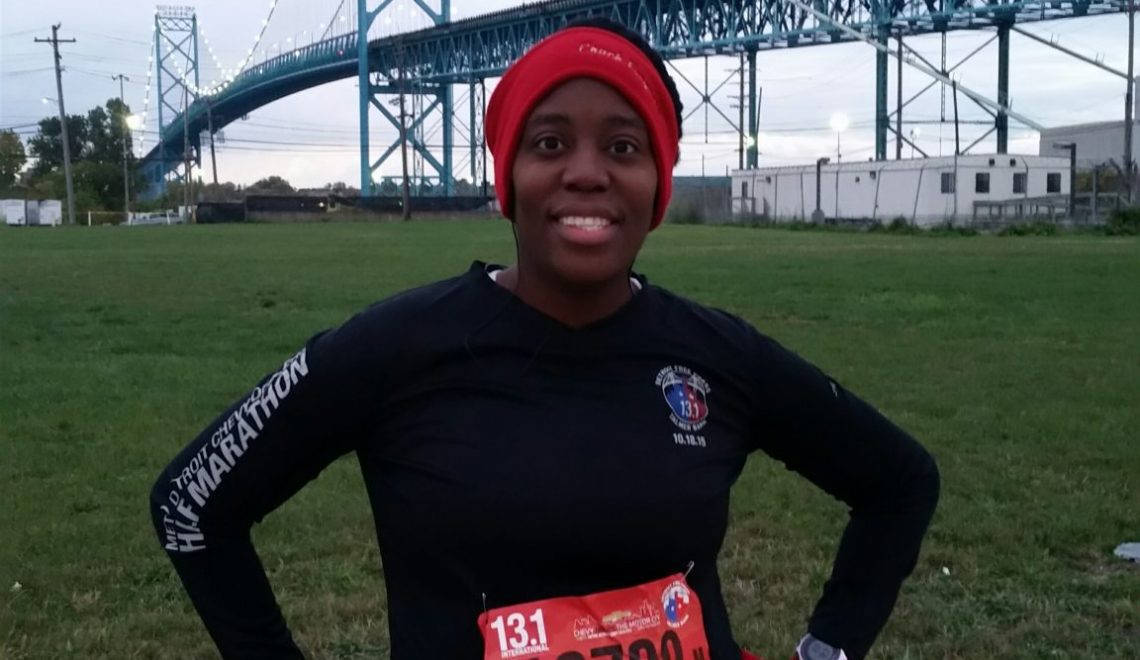 “Hold on a minute, sweetie.  I have to register for the Detroit International Half Marathon.” Ambassador Bridge to Canada across the Detroit River.

The folks at runDisney put on an amazing race, but the Detroit Half is a close second.  A very, very close second.  There are several races offered during race weekend.  There are kids races and a 5K, two half marathons and a full marathon.  Yep. Two half marathons on the same day!  Also allowed were relay teams for the full marathon.  The signature event, the Metro Chevy Dealers International Half Marathon is the only course of its kind that takes runners from the United States to Canada via the Ambassador Bridge, and returns runners to the United States via the mile long, underwater Windsor Tunnel.  A passport or Enhanced Driver’s License (EDL) is required for entry. I was one of nearly 28,000 people who flocked to Downtown Detroit for the festivities.  First up was the Health & Fitness Expo, held in Cobo Hall.  Runners are required to show their passport or EDL when picking up bib numbers.  Customs and Border Protection are on site.  They are also present in heavy numbers at border crossing.  I’ll tell you more about that later.  The Expo offered many of the same products, freebies & demonstrations you see at typical race expos, but I was unable to enjoy them all since my alternator quit during the hour drive to Detroit and left me stranded at a mall (so glad it was the mall with the Disney Store).  I arrived at the expo, frazzled, with just under 30 minutes left before it closed.  If I had missed the expo, I would not have been permitted to run.  Since it is an international race, there are no exceptions to this rule.  They give you plenty of time to attend; the expo opens on Thursday and the half marathons/marathon is on Sunday.

The only improvement needed to make this race better is primarily due to parking availability and traffic congestion.  Because I had car trouble, a relative dropped me off about a mile away from the starting line.  It was so crowded and traffic was backed up on the freeway so far that many runners jumped out of their cars and walked up the freeway ramp into downtown Detroit to make it to the starting line on time.  I bet those left in the cars sat there for an extraordinary amount of time, only to repeat it after the race was over.  In addition to the race, there was a Detroit Lions football game happening.  Oy! The participant guide suggested that runners be parked by 6 am, an hour before the race, but that still wasn’t enough time given the congestion.  Next year, I will stay at a hotel downtown instead of with a relative so I can have my car parked by Thursday. Welcome back to USA! USA on the left, Canada on the right!

As with most large races, it started in waves.  International half marathon and full marathon runners began at the same time, all together.  Midway through the race, the half marathoners turn right to the finish line, while the full marathoners take a left to continue the race, just beyond the starting line of the US Only half marathon, which begins at 10:30 am.  The course was fantastic.  Starting in waves helped congestion on the Ambassador Bridge.  The Customs and Border Patrol agents had to be in shape for the race; in full gear, they sprinted to catch runners who may have had bibs hidden and asked them to produce their bib and passport.  Several people were stopped.  Not me, I followed the rules.  The Windsor Tunnel was a bit stuffy, but not as claustrophobic as I expected.  I could not imagine running that in the summer!  The sweat pouring down my face after leaving the tunnel made me happy it was only 55 degrees that day.

The support from the spectators rivals any race I’ve run.  The Canadians were the best!  There were hundreds of people lining the streets, bands, fresh fruit stops, amazing (and funny) signs during the miles through Canada.  Back in the US, there were more awesome crowds, an M&Ms stop around mile 10 and a bacon stop around mile 12.  Bacon is an awesome way to finish a race!  Better still was the giant medal that showcased all things Detroit.  While I waited in line for hummus and chocolate milk, it was great to see the Detroit People Mover whizzing by over our heads, quite reminiscent of Disney’s Monorail.  I couldn’t wait for “Medal Monday” back at the office so I could show off my finisher’s medal and awesome long-sleeved New Balance shirt.  First, I had to enjoy, “Conquered,” the amazing after party that boasted massages, food trucks and all kinds of entertainment.

January 1, 2016 will be here before I know it.  This race is expensive, so it’s best to register on New Year’s Day at 12:01 am to get the deep discount.  Will I register for the International Half Marathon again or the International Full Marathon?  I’ll give my legs and feet a trial run at the upcoming Wine & Dine 5K and Half Marathon at Walt Disney World, plus the Infinity Gauntlet Challenge the following weekend at Disneyland.  Over 35 miles in a week, on both coasts! The Windsor Tunnel was HOT!