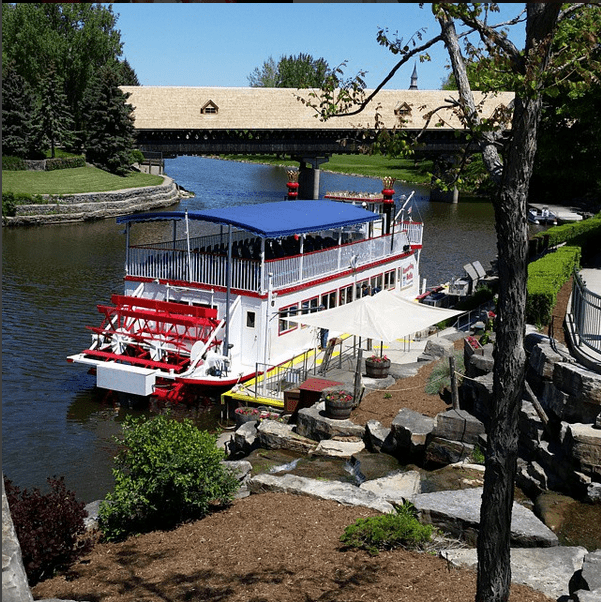 It’s not every day that I can roll out of my own bed and drive to the starting line of a race.  Anytime I get that chance, I take it.  Not only is this race about 20 minutes away from home, but Brückelaüfe is the first half marathon I’d ever run and my fastest times are always on this course.  I love a good runDisney race, but this one holds just a tiny bit of sentimental value. After destroying our bedroom looking for my long compression socks & pants, I grabbed my water bottle, jumped in the car and headed north to a little German town, Frankenmuth, Michigan.  Frankenmuth is known for Bronner’s Christmas Wonderland or “The World’s Largest Christmas Shop.”  The starting line for the race was in Heritage Park, not far from the store. The race began at 7:30 am; I strolled in about 6:45, picked up my bib and went back to the car to stay warm.  It was a fantastic 48 degrees at the shotgun start.  The long socks came in handy.  I never found the pants.  Brr!

Brückelaüfe is German for “bridge race.”  Runners crossed a total of thirteen bridges over the 13.1 mile course, including the most well known bridge, Zehnder’s Holz Brucke, a 239 foot, 230 ton covered bridge made completely of wood which spans the Cass River.  Traffic was never completely closed during the race, so it was a bit unnerving running across this bridge, hoping drivers would adhere to the 7 mile per hour speed limit as they traveled in the very next lane.  Other notable bridges included 1904 Gugel Bridge, and the 1907 iron trestle Black Bridge. The race is the final one in a three part series, put on by the Frankenmuth Jaycees which also includes Winterlaüfe (The Winter Race, in February) and Volkslaüfe (The People’s Race, on Independence Day). Those participating in all three races were awarded a specially-designed finishers medallion.  I usually spend Independence Day at Walt Disney World, so no special medallion for me.  Boo!  I do think the wooden finisher’s medal for Brückelaüfe, which is a picture of the Holz Bridge, is marvelous.  In addition, there is also a 5k that begins about a thirty minutes after the half marathon.  Those interested in traveling to the area will be pleased to find a fantastic water park, plentiful hotels, shopping, and fantastic dining experiences including Zehnder’s World Famous Fried Chicken and cupcakes from Sugar High Bakery, winners of Food Network’s “Cupcake Wars.” I think they want to know who I am and why I’m running through their farm.

Aside from seeing the historic bridges, there is plenty of farm country on the route.  Chickens, alpacas, cows, horses and a number of other critters served as race spectators.  The trees have yet to change into their colorful fall wardrobe, but the scenery was still quite pretty.  I’m always on the look out for fellow runDisney fans and was happy to spot two, one of which crossed the finish line with me.  Did I PR? Yep! Shaved 20 minutes off my record!  I’m feeling really good about it, and that’s not just because there was beer and pretzels after the race.  The next race will be…

The Detroit International Half Marathon on October 18, 2015.  This race is rare in that runners will cross the border to Canada on the Ambassador Bridge and return to the United States via the underwater Windsor Tunnel.  I cannot wait!  Stay tuned!