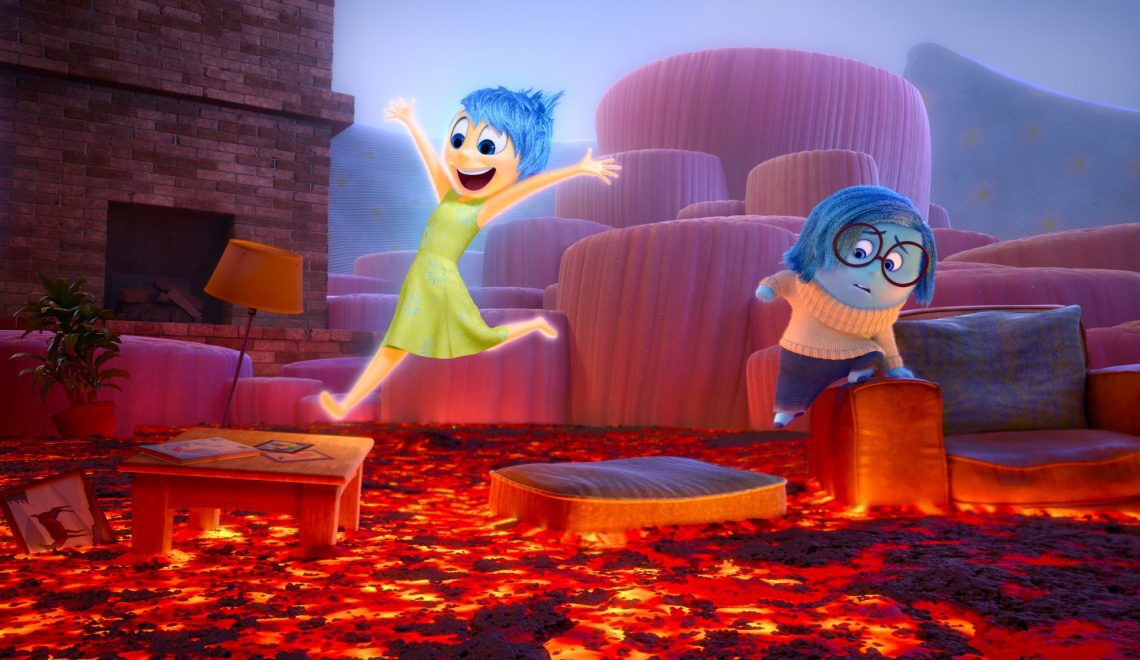 From the moment I sat down with Pete Docter and Jonas Rivera last January, and listened to them talk, I knew that their new film, Inside Out, now playing in theatres everywhere, was not only going to be a movie with something for everyone but would be a story that would touch our hearts and stay with us for years to come. It is a film that comes around every once in a rare while that tells not just their story, but also each and every one of our own stories. Every person that sees it will quickly recognize a portion of their life captured in this beautifully crafted masterpiece that tugs at your heartstrings and leaves you walking out with a smile on your face, joy in your heart and an overwhelming feeling that life is good.

So why see Inside Out?

A Journey Into Imagination Riley isn’t just the main character of Inside Out. Her mind serves as the setting that allows us all to go on this adventure and gives us a glimpse of how her emotions, Joy, Sadness, Disgust, Anger and Fear deal with a traumatic move from the Midwest to San Francisco when Riley’s family is uprooted by her father’s job. Who else but Pixar could take us to Headquarters and allow us to see into the inner workings of our own minds from how core memories are created to the interplay between our memory islands to yes, even catching a ride on The Train of Thought.

We’ve All Got Voices Inside of Our Heads

Admit it, from the moment you first heard that the cast included Amy Poehler as Joy, Phyllis Smith as Sadness, Bill Hader as Fear, Lewis Black as Anger, and Mindy Kaling as Disgust you were already hearing the voices playing out in your own mind. To hear them bring the characters to life is Pixar perfection at its best.

The Roller Coaster of Our Emotions Inside Out takes on the daunting task of trying to explain why not just children, but all of us act the way we do and they totally hit it out of the ballpark capturing the emotional roller coaster of life. Ever stop to wonder why children behave one way and not another? Why are kids fearless and how does that get lost along the way? Where do the temper tantrums in life come from and just who decided that there was joy to be found in eating when food is flown into our mouths on an airplane? Inside Out is an insightful and hilarious look inside the mind and in the cleverest of ways you quickly discover that there can be sadness in joy and joy in sadness and that’s what makes life so complicated but beautiful.

New Stylistic Grounds & A Score That Sweeps You Away Inside Out breaks new stylistic ground. While previous Pixar movies have aimed for realism, Inside Out came with new challenges and uncharted territory. The emotions are not rendered as solid—they are composed of tiny particles of light. Designed to look like how emotions might feel, their unusual texture presented a unique opportunity to reject the realism previous Pixar animations had pursued. Each of the set pieces within the mind is as unique and inspired as each of character’s identities. The dark recesses of the mind, Imagination Land, the corridors of stored memories, and a trip through abstract thought gives Pixar a chance to do what Pixar does best. Add in the memorable score of composer Michael Giacchino whose previous scores helped to propel such stories as Up, Tomorrowland and Jurassic World. His music seamlessly captures the spirit of each of the film’s major characters and emotions. The tender and bittersweet musical moments for Joy and Sadness will stay with you long after the movie and like it’s musical predecessors, over the years hearing the music will take you back to reliving the emotions of the movie time and time again. Giacchino’s score opens the floodgates and like the best of Pixar’s movies is effortlessly endearing and uplifting.

When The Short Could Be Feature Pixar films usually begin with an astonishingly creative and heartfelt animated short to get the ball rolling and Inside Out is no exception. Lava, the masterpiece that precedes Inside Out may just be the greatest love story ever told and would be worth the price of a ticket just to see it. You may want to skip this section as there might be a spoiler or two here but they have to be included. Inside Out is a story told without the use of any villains or bad guys or for that matter anything else that sometimes movie makers deem necessary to move the story forward, unless you happen to be one of those people with a fear of clowns but the role of the clown luckily is played as more of an inside joke. The decision to do without a villain means that the process Riley is undergoing, growing up, is visualized as, well, normal. Her mind is not a space that’s been invaded by something that must be driven out, but a new environment to be mastered. Most movies teach children how to be brave when they see witches and giants but with Inside Out maybe now we finally have a way to teach them how to be brave when there’s no witch and no giant. Even when things can feel broken and scary, they can still be fixed. One of the biggest but most welcome surprises of the film comes from the fact that the creators have taken a bold chance and broken away from traditional Disney story telling. Both parents actually make it to the end of the movie!  Thank you for this!

Who’s Your Friend That Likes To Play? The best part of Inside Out, and that’s saying a lot right there, is Bing Bong, Riley’s imaginary friend who is a strange amalgam of an elephant, a cat, candy, and a dolphin. He’s lost within Riley’s memories, unaware that she’s outgrown him. “Who’s your friend who likes to play? Bing Bong. Bing Bong.” But it’s sadly obvious to everyone except Bing Bong that he might be the only one who still remembers the song and that’s ok but we love that he does. Bing Bong also delivers the most powerful message of the film, that childhood innocence is precious and will sadly, eventually fade away, but it’s also necessary. Bing Bong is the friend we all had, and maybe still do, and the one that clutches at your heartstrings and take you back to a place of time gone by, reminiscing about what once was, and maybe leave you more than a little nostalgic and wanting more.

The Critics Finally Got It Right To quote another popular Disney classic, “For the first time in forever…” the critics got this one right. Inside Out is inventive, gorgeously animated, and powerfully moving.  Inside Out is a vibrant, witty film, full of dazzling visuals, that combines intricate workings while not allowing it to overwhelm the story. But most importantly, Inside Out is what a family movie ought to be. And what adult can’t relate to what happens to Riley? The kids will love it and you will love it. Gather the family and sit back and enjoy the journey to the voices inside our minds. Go see Disney Pixar’s Inside Out. INSIDE OUT Is Now Playing Everywhere!

Disclosure: I have been invited by Disney to cover this media event. All material and expenses for this event have been provided courtesy of Walt Disney Studios but all opinions expressed here are my own.