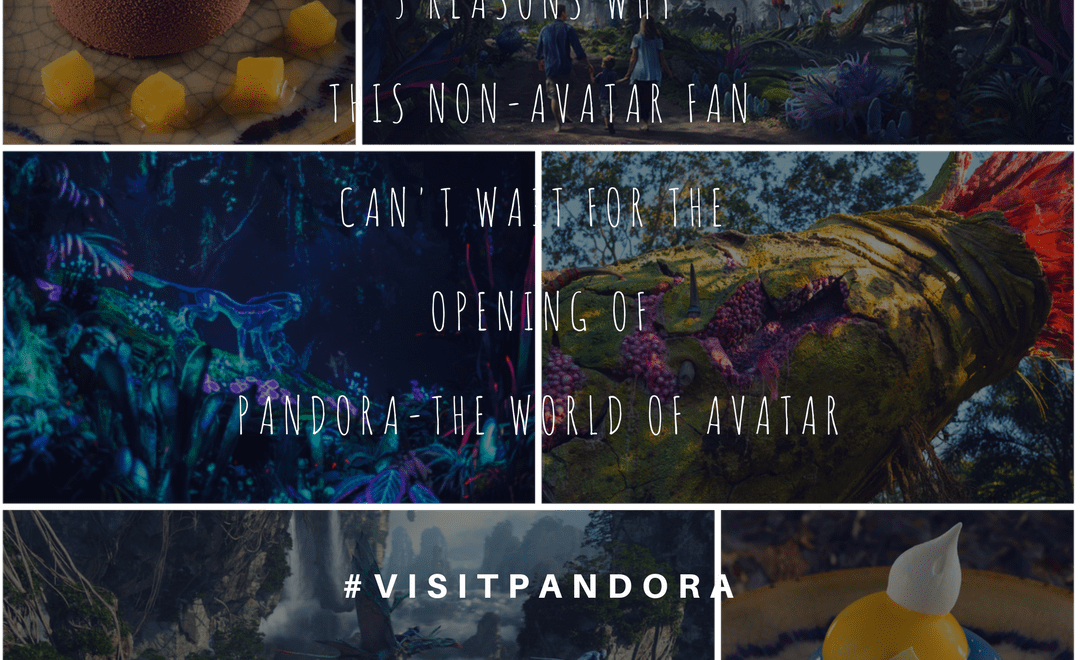 Confession time-when I first saw Avatar well let’s just say I may not have been the biggest fan of the movie in fact my big takeaway from it was that they were blue but then again so are Smurfs but Smurfs are short and blue vs. tall and blue but when I heard Disney was creating Pandora-The World of Avatar suddenly I was totally, completely, 100% hooked at the idea of entering this new world because I know that if Disney is doing it, then it will not disappoint. I can remember walking into Cars Land at Disney’s California Adventure and it was as if I had stepped right into the movie itself and I was mesmerized and if the pictures that are now coming out are any indication, I may never leave Pandora once I transport myself there-in fact you might even say I’m that kid about to go to Disney that is “Too Excited To Sleep.”

So in case you’re still scratching your head wondering how this non-fan of the movie is beside herself with excitement to experience this new land, here are just a few of the reasons why I cannot wait to enter Pandora-The World of Avatar.

It’s All In The Storytelling

From day one, it was Walt himself that set the standard-it all begins and ends with the storytelling  and that legacy has been handed down and is still the standard to this day whether it be in movies, television or within the Disney Parks themselves and Pandora epitomizes this in every way from the moment you walk into this new world from your surroundings and environment to the food that is nothing like anything you’ve ever seen or tried before to the two new attractions that will transport you as you float along on you  Na’vi River Journey or find yourself flying high on the back of a mountain banshee for your Avatar Flight of Passage you suddenly find yourself thrust into where the “real world” ceases to exist. This is more than just a movie brought to life but rather an all new land that celebrates the magic of nature. Writer, director and Avatar producer James Cameron worked closely with the Disney Imagineers to bring Pandora to life: Think about the first time you enter a Disney Park and about your first memories.  If you’re like most of us, it was something that took our breath away. For me the same could be said about Disney’s Animal Kingdom each and every time I visit and truth be told, it is my all time favorite of all of the Disney Parks. Entering and standing amidst the flora and fauna, the feeling that I am in lands I have only dared dreamed of visiting and being surrounded by the majesty of nature that is Disney’s Animal Kingdom – Pandora-The World of Avatar will be all of this and them some. Here guests will behold a land that’s beyond belief and actually walk about through the Valley of Mo’ara.

At every turn one will find exotic plants that come to life with beautiful bioluminescence each night, A Na’vi-built drum circle, containing instruments playable by all, Na’vi totems and other cultural items found throughout the land and expect to be greeted by across tour guides from Alpha Centauri Expeditions (ACE), scientists from the Pandora Conservation Initiative (PCI), or even an eclectic expat or two!

Food That Is Out Of This World If you know anything about Disney, then you already know that their attention to detail is like no other and that includes the food of Pandora-The World of Avatar. Owned and operated by Alpha Centauri Expeditions (ACE), Satu’li Canteen supplies travelers all the comforts of home—courtesy of a unique, fast-casual menu that’s been crafted from Pandora’s natural abundance. The Satu’li Canteen  invites you to indulge in the art and culture of the Na’vi while dining inside this former RDA mess hall with delectable meals from a menu inspired by the bounty of  Pandora. Here one will discover healthful dishes and familiar flavors from another world—wholesome grains, fresh vegetables and hearty proteins but if truth be told, it’s the new desserts I am most excited to try and maybe even indulge in a new libation or two at the Pongu Pongu Lounge. Located in the corner of Windtraders you’l  find when run across a friendly expat who fell in love with Pandora….and never left and is now serving out-of-this-world drinks. Here you’ll be able to quench your thirst the Pandoran way at an otherworldly pit-stop offering Na’vi-inspired refreshment.

The Thrill Of New Attractions Whether it was the first time you went Soarin’ Over California, and now the World, or traveled to a galaxy far, far away on Star Tours, or gathered all your courage to go on an expedition on the World Famous Jungle Cruise in search of the 8th wonder of the world, the back side of water, Disney attractions are unique in that they convey a story from start to finish while at the same time, offering you a one of a kind, unique experience. And with the opening of this all new land will come two brand new attractions taking you on a journey to an all new world.

Avatar Flight of Passage offers the guest an otherworldly aerial adventure.  Bonding with a mountain banshee is a crucial step in the life of a Na’vi hunter—and flying on the back of one of these powerful winged creatures represents an important rite of passage and now, as a visitor to Pandora, you’ll finally have the chance to test yourself in a similar way. Deep in the heart of the Valley of Mo’ara awaits this all-new expedition that lets interstellar explorers climb atop a mountain banshee for a breathtaking, first-person flight over the moon’s incredible landscape. Then after you’ve flown over the Valley of Mo’ara, it’s time to sit back and travel on the river Na’vi.

The Na’vi River Journey allows you to travel deep into a bioluminescent rainforest in search of the Na’vi Shaman of Songs. As this family friendly expedition begins when you climb aboard a reed boat and drift downstream. After coasting through a series of caves, and passing by exotic glowing plants and amazing creatures of the rainforest, you’ll soon find yourself face-to-face with the Na’vi Shaman of Songs.  Be sure to book FastPass+ selections for Avatar Flight of Passage or Na’vi River Journey now!

There’s No Better Time To Travel To Pandora Than NOW! Beginning May 27, 2017, the gates to the Pandora-The World of Avatar will finally open to the world and you will be able to experience and explore first-hand all of the magic that is waiting for you journey to this all-new, awe-inspiring land that celebrates the magnificent power of nature. In partnership with ACE, you and your entire family will have the chance to explore the values and culture of this exotic place, and celebrate the striking beauty and overwhelming power of the natural world.  Disney wants to help you maximize your time at Pandora from extended theme park hours to FastPass+, make the most of your visit to this faraway moon! Extended Theme Park Hours
For a limited time from May 27 to July 4, 2017, Disney’s Animal Kingdom park will be open from 8:00 AM to 11:00 PM, giving you more time than ever to explore Pandora – The World of Avatar.

What are you waiting for? Pandora-The World of Avatar is waiting just for you and create the memories that last a lifetime. Want to visit Pandora-The World of Avatar right now from the comfort of your own home? Well thanks to Alpha Centauri Expeditions, you can see all that awaits you and then while you’re there, be sure to book your trip! Simply follow the link to #VisitPandora.