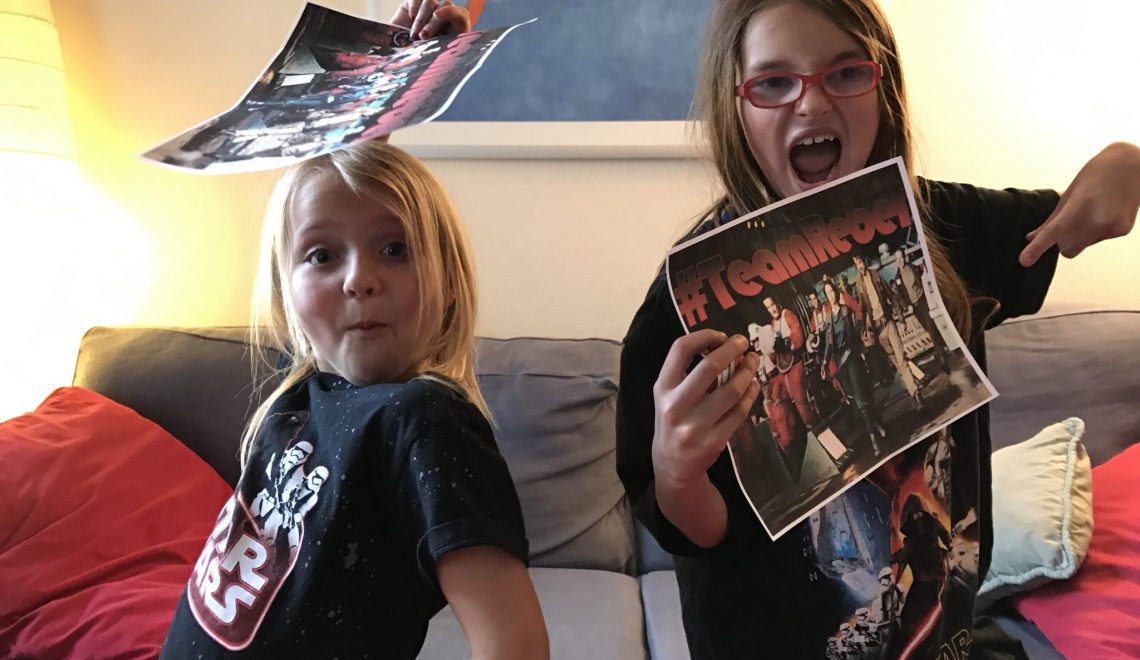 Last weekend in honor of the #RogueOneDigital release, we proudly joined with bloggers from all over to be a part of #TeamRebel during a live twitter party in which I am happy to report that the Force was strong in us that day as we valiantly were able to not only come together but to defeat #TeamEmpire in an epic battle but the real winners at the end of the day was being able to share this movie with so many others from across the country, but more importantly, my family. The girls have been asking to see Rogue One: A Star Wars Story and thanks to Disney Home Entertainment, there dreams were finally realized as they planned and orchestrated their own Star Wars Home viewing party. We were lucky enough to be able to use our brand new Roku streaming device that was included in our party box and I have to say, I do not know how I existed without until now. It was so simple to set up that even I could do it on my own in a matter of minutes and considering I can’t figure out how to switch our remotes from cable to DVD player, that’s saying a lot. Roku provides the simplest way to stream entertainment to your TV. On your terms. With more channels than any other streaming player and the best part is that it’s totally portable meaning that I can take it with me and use it where ever I am. Next was a stop at Target for the girls to shop for party supplies. to chocolate Star Wars Easter eggs which came with Star Wars surprise inside to Storm Trooper candy keepers which easily kept them happy throughout the viewing. The Star Wars universe of films have always epitomized the struggle of good vs evil but until the release of Rogue One, never before had we witnessed a struggle like this; one that showed what a small band of determined Rebels who banded together to fight for what they believed in against all odds could do. In a time of conflict, a group of unlikely heroes band together on a mission to steal the plans to the Death Star, the Empire’s ultimate weapon of destruction. This key event in the Star Wars timeline brings together ordinary people who choose to do extraordinary things, and in doing so, become part of something greater than themselves.

Rogue One: A Star Wars Story is a prequel that turns its focus to the Rebel Alliance’s attempts to steal the plans for the Death Star. But there will be many key differences that will set this apart from other Star Wars films. Rogue One: A Star Wars Story is directed by Gareth Edwards who also directed Godzilla and it marks the first film in the series without a score by John Williams but rather iconic composer Michael Giacchino has created the score that propels the film.

And now when you bring home the Digital HD and Disney Movies Anywhere  or the Blu-ray™ Combo Pack, DVD and On-Demand on April 4 you’ll be treated to never-before- seen Rogue One  bonus material will take you behind the scenes with the movie’s diverse, dynamic cast and inspired team of filmmakers. An intimate collection of stories reveals how the film came to life, as well as hidden Easter Eggs and film facts that audiences may have missed in the theater. “SAVE THE REBELLION. SAVE THE DREAM.” Disclosure: This post was written in partnership with Disney Home Entertainment however the thoughts and opinions expressed here are 100% my own.