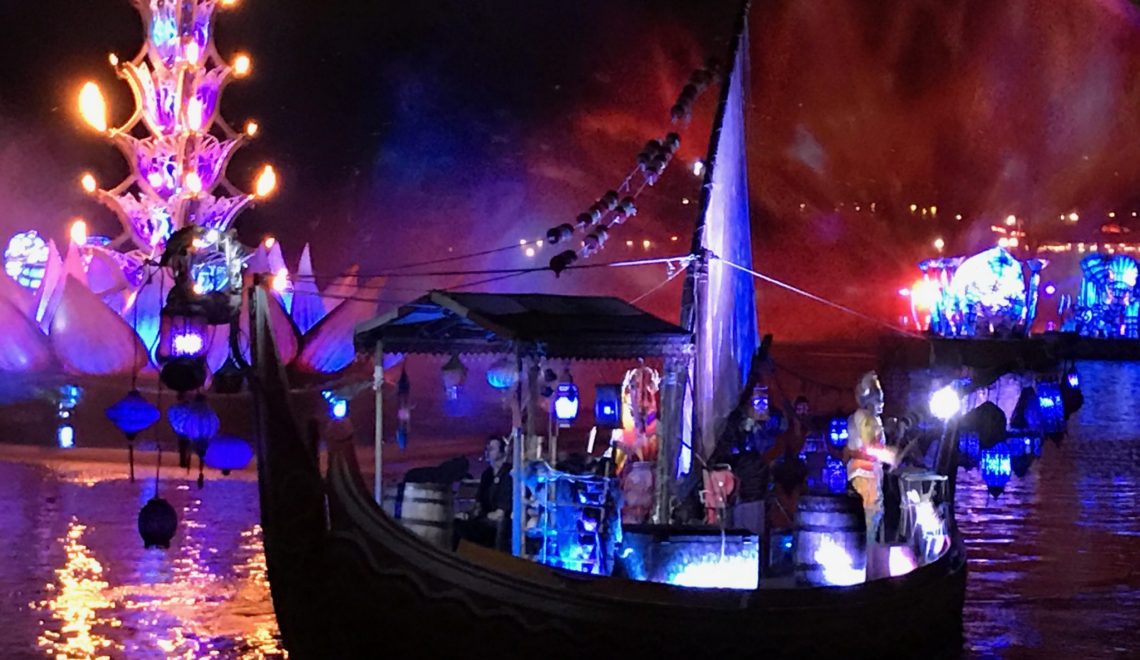 Last week one of the highlights of being a part of the 2017 Disney Social Media Moms Celebration was being one of the first to experience Disney’s Animal Kingdoms new nighttime spectacular Rivers of Light. Majestic in its story telling and breathtaking in its pageantry, Rivers of Light is an all-new nighttime show at Disney’s Animal Kingdom and now ready and waiting for you to experience it for yourself. The show is rich in symbolism and storytelling, with this elaborate theatrical production taking me and the other guests lucky enough to experience it on a breathtaking emotional journey – a visual mix of water, fire, nature and light all choreographed to an original musical score. The new 15-minute show is the latest addition to the lineup of nighttime experiences at Disney’s Animal Kingdom. Celebrating the majesty of nature and the connection between animals and humans in the world, the performance combines live performers, beautiful floating lanterns, glistening fountains, special effects and authentic animal imagery projected on giant water screens. “Disney’s Animal Kingdom is built around the lives of animals, built around the rules of nature, and those rules dictate that as you move between day and night everything changes…and you’re going to want to see that,” said Joe Rohde, Creative Executive, Walt Disney Imagineering. “It all really is summed up by Rivers of Light. In the show, we take this combination of light and water which create life, and out of that comes this fantastically rich explosion of animal life that ultimately rises up and joins the stars.” As the sun sets, guests gather along the picturesque edge of the Discovery River at the site of a fabled age-old ritual. A new 5,000-seat amphitheater welcomes guests to two distinct “villages” separated by a bridge and the river. Sounds of animals are heard from a nearby forest, and magical fireflies descend from the Tree of Life toward the lagoon, creating a sense of wonder as four beautifully illuminated Lotus flowers float across the water.

The ceremony begins with a stirring musical overture signaling the arrival of a pair of mystical Storytellers, two complementary forces who come to the river bearing gifts of light. They set out from the shore aboard elaborate lantern vessels. Adorned in intricately designed costumes, the hosts engage in a dramatic dance of water and light to summon the animal spirits – an Asian Tiger, Tropical Turtle, African Elephant and Great Horned Owl – and take guests on a wondrous journey across Asian jungles and African savannahs.

Disney challenged renowned Broadway production designer Michael Curry to create vessels that were artistic and stimulating, yet innovative. The commanding lanterns stand 15 feet tall and are 30 feet long, illuminated from within by innovative LED technology. As the mesmerizing show progresses, Rivers of Light continues to unfold with a powerful musical score created by songwriter and composer Don L. Harper and recorded at the renowned Abbey Road Studio in London. The signature song “We Are One” was written by Mark Mancina, who created the score and was a key collaborator on the music for Disney’s hit animated feature film “Moana.”

A collaboration with Disneynature to incorporate rare nature cinematography showcasing tender animal moments adds rich authenticity to the storyline. Many are never-before-seen moments from Disneynature films. The crescendo of the evening finale blends triumphant music and a waterfall of colors celebrating the circle of life.“At the show’s finale, we hope guests will feel like they have been on a tremendous ceremonial and visual journey,” said Michael Jung, Walt Disney Imagineering creative director. “Rivers of Light really provides an affirmation of life and reminds us of the beauty and fragility of the natural world we all share – with animals and one another.” Technology and attention to detail play starring roles in the new show. The 11 show floats are independent of each other and programmed to follow a choreographed “dance” across the lagoon. More than 50,000 programmable, color-changing LED lights are found in the four Animal Spirit Guide floats alone. Each Lotus float produces its own water screen. Costumes for the storytellers and their acolytes include fabrics using 5,000-year-old dye and weaving techniques. Following its Feb. 17 premiere, Rivers of Light will be performed on select nights.Special dining packages are available to park guests that include reserved seating at the new show. Packages are offered at the buffet-style Tusker House or the new signature restaurant Tiffins (lunch and dinner). Reservations can be made by visiting DisneyWorld.com/dining or by calling 407 WDW-DINE. Rivers of Light joins a rich variety of new nighttime experiences and family adventures designed to offer up Disney’s Animal Kingdom in a whole new light. These include: