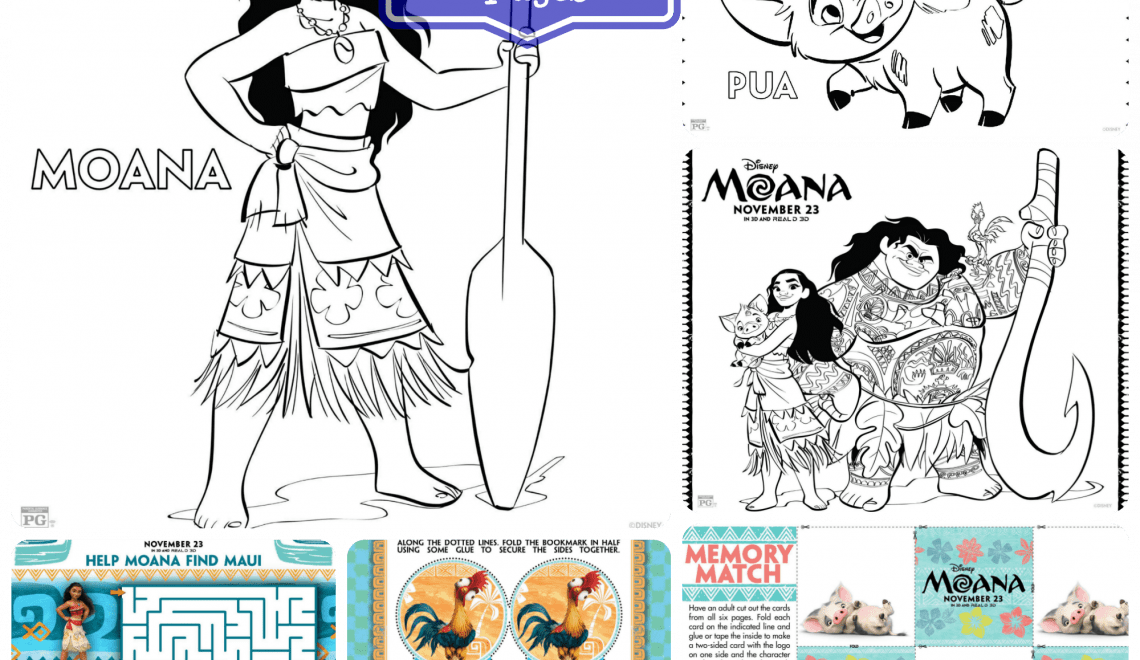 The countdown is on to  Disney’s 56th animated film Moana which will set  to sail across the Pacific and into our hearts next month on November 23. But now you don’t have to wait until then to bring home the joy of Moana to your family as we have these great coloring pages, bookmarks, match game and maze all from the movie for you to download, print and use right now and the best part-they’re all totally free.  To save any or all to your own home computer simply right click and hit save-it’s just that easy and then sit back and relax with your kids as you bring the story to life. Disney’s Moana will be Disney’s first Pacific Islander princess and will feature the voice talents of Dwayne “The Rock” Johnson as a mighty demi-god and introducing Auli’i Cravalho who stars a Moana, the young teenage girl who bravely sails across the Pacific Ocean to “complete her ancestors’ quest.

The legend of Moana brings to life the story from 3,000 years ago when the greatest sailors in the world voyaged across the vast South Pacific. Their voyages suddenly stopped and no one knew exactly why.

Enter Moana (the Hawaiian and Maori word for “ocean”) who decides to sail across the Pacific Ocean to finish what her ancestors started. Dwayne “The Rock” Johnson will voice the Demi-God Maui, who, according to Polynesian culture, founded all eight Hawaiian Islands.

His character teams up with Princess Moana on her journey. Together, they sail across the open ocean on an action-packed voyage, encountering enormous monsters and impossible odds, and along the way, Moana fulfills the ancient quest of her ancestors and discovers the one thing she’s always sought: her own identity.

AND NOW, Here’s A Look At DISNEY’S MOANA:

Moana is produced by Osnat Shurer and directed by Ron Clements and John Musker. Clements and Musker have been responsible for bringing to life some of the most memorable Disney movies of all time including their collaboration directing The Little Mermaid, Aladdin, and most recently, The Princess and the Frog.

Musker describes Moana as someone who is indomitable, passionate and a dreamer with a unique connection to the ocean itself, and she’s the kind of character we all root for, and we can’t wait to introduce her to audiences.

The story of Moana was inspired in part by the oral histories of the people and cultures of Oceania. Three thousand years ago, Polynesian voyagers, the greatest navigators in the world, voyaged across the vast Pacific, discovering thousands of islands. But then, according to scholars, for approximately a millennium, their voyages stopped – and no one knows exactly why. Navigation is such a big part of Pacific culture and the ancient Polynesians found their way across the seas without the use of modern instruments, using their knowledge of nature, the stars, the waves and the currents. It is said that the ocean doesn’t separate the islands, it connects them. Voyaging is a real source of pride for Pacific Islanders, a part of their identity. They were, and continue to be, some of the greatest explorers of all time. What they did was quite sophisticated, borderline miraculous. There are many theories, but no one is certain, about what may have led to this 1,000- year gap in exploration; this sparked the filmmakers’ imaginations and led to the makings of Moana.

THIS THANKSGIVING,  THE OCEAN IS CALLING…

KEEP UP ON ALL THE LATEST FROM MOANA: