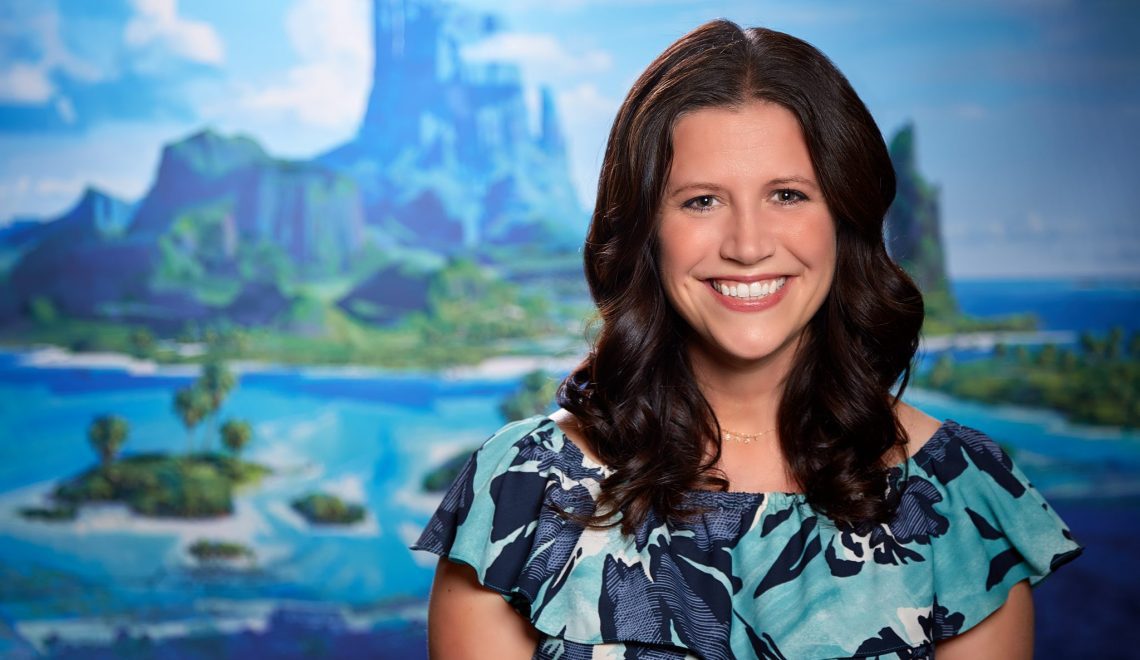 One of the highlights of being a part of the Disney Social Media Moms “On The Road” Celebration at the Disneyland® Resort was having the chance to listen to Amy Smeed, the first woman ever to hold the title of head of animation for Disney Animation Studios and who brought with her some very special sneak peeks of Disney’s Moana, which sails into theaters November 23. Her passion for the project was infectious and her genuine enthusiasm for the movie and what it represents immediately captured the hearts and minds of every person in the room.

Although much of what we heard we can’t quite share yet, here’s a little of what we can tell you about the adventurous teenager Moana who, with help from demigod Maui, sails out on a daring mission to prove herself a master wayfinder and save her people.

The Story Behind The Story

The story of Moana was inspired in part by the oral histories of the people and cultures of Oceania. Three thousand years ago, Polynesian voyagers, the greatest navigators in the world, voyaged across the vast Pacific, discovering thousands of islands. But then, according to scholars, for approximately a millennium, their voyages stopped – and no one knows exactly why. Navigation is such a big part of Pacific culture and the ancient Polynesians found their way across the seas without the use of modern instruments, using their knowledge of nature, the stars, the waves and the currents. It is said that the ocean doesn’t separate the islands, it connects them. Voyaging is a real source of pride for Pacific Islanders, a part of their identity. They were, and continue to be, some of the greatest explorers of all time. What they did was quite sophisticated, borderline miraculous. There are many theories, but no one is certain, about what may have led to this 1,000- year gap in exploration; this sparked the filmmakers’ imaginations and led to the makings of Moana.

It All Begins In The Research-The Journey To Oceania As with any Disney movie, the storytelling all begins with the research and in order to do this, the filmmakers and production team traveled to Oceania to be able to bring the story to life. When first thinking of setting an animated feature in the beautiful Pacific Islands. The directors of the film, Ron Clements and John Musker, recalled from their youth beloved novels and paintings about the Pacific but once they began exploring the incredible tales within Polynesian mythology a few years ago, the filmmakers realized they needed to dive much, much deeper and the only way to do that was to go to the islands of the Pacific to see the places and meet the people in person. Clements and Musker, along with a group of Disney Animation artists, traveled to the southern region of Oceania over the course of two fully loaded trips. They came away from these trips not only with ideas, images and inspirations for our story, but with an even stronger resolve that they wanted to make something that the people that they met would approve of but also realizing that ultimately they weren’t making a documentary but an animated feature. Their experiences infused their imaginations in a way they hadn’t anticipated.

The Oceanic Story Trust Is Formed

The team was transformed and the research trips opened their eyes in ways never imagined but one thing was certain-in order To create the fictional story set 2,000 years ago, they knew they needed to invite the experts they met during the trips to be a part of the creation of the film. It was one thing to be inspired by the research trips, but they wanted to go further. The team wanted to ensure that it was their voices that were to influence the film—from the story, to the look of the environments, to the characters. Everything—from how Moana’s canoe looks and functions, to plants on the islands, to the material used in their clothing—was all deeply influenced by this team of advisors. In the end the filmmakers ultimately assembled the Oceanic Story Trust that includes a team of experts -anthropologists, academics, educators, linguists, master navigators and cultural advisors—who collaborated with Disney’s creative team. Smeed emphasized many times the Trust had deeply influenced the look and feel of this film every step of the way.

The Look- The Setting Becomes It’s Own Character

With credits like “Aladdin” and “The Little Mermaid” under their belts, directors John Musker and Ron Clements have a storied background in hand-drawn animation, in addition to CG work on several of their projects. But when they envisioned Moana they knew their approach would be different. What they endeavored to do with the ocean and island settings in the film really called for CG animation lighting and textures and dimension that when you see the movie, you’ll discover for yourself that not only is it an incredible, immersive experience but the ocean itself becomes a character in the film.

The islands, the skylines, the mountains, even the characters all have a sculptural quality to them but they aren’t necessarily a photo-real look but rather a world that’s a slightly caricatured version of the Pacific Islands we’ve experienced with the final look of the film being. The idea was that the filmmakers wanted to create something so enveloping that you’d want to jump right in and they succeeded and then some.

It’s All In The Music-The Rhythm Of The Islands

As with any classic animated Disney movie, it is the music that becomes a part of you and will stay with you long after the final credits role and never is that more true than in the music of Moana. For the trio behind the film’s captivating score, Lin-Manuel Miranda (who signed onto the project long before Hamilton ever hit Broadway, Mark Mancina and Opetaia Foa‘I research again was instrumental (pun totally intended) and started out by attending the Pasifika Festival in Auckland, New Zealand.

It was the first time that the musical team had actually come together not only with each other but with the filmmakers as well. The festival was a wonderful opportunity to experience the variety and joy of the music and the dances of the many Pacific Island cultures. Among the many people they met, one meeting stood out -an elder on the island of Mo‘orea asked them something so simple and so revealing that it would not only stay with them, but would come to serve as one of the underlying themes for Moana: “For years, we have been swallowed by your culture,’ he said. ‘This one time, can you be swallowed by ours?’” If you’re anything like I was, the music will sweep you away and you will quickly be caught up in what so many of us already know “The Ocean Is Calling….”

Stay tuned over the next few days as we bring you an insider’s look at the characters that make up the story of Disney’s Moana and the people that bring them to life. In he meantime, save the date and get ready to journey away on a voyage of courage, determination and the strength that comes from following your calling to your destiny-Disney’s Moana sails into theaters November 23.

Find our all the latest on Disney’s Moana

“You may hear a voice inside. And if that voice starts to whisper to follow the farthest star … Moana, that voice inside is who you are.” ~ Gramma Tala, “Moana”