The Transformation of Jordan Into Wonder Woman- Born Just Right 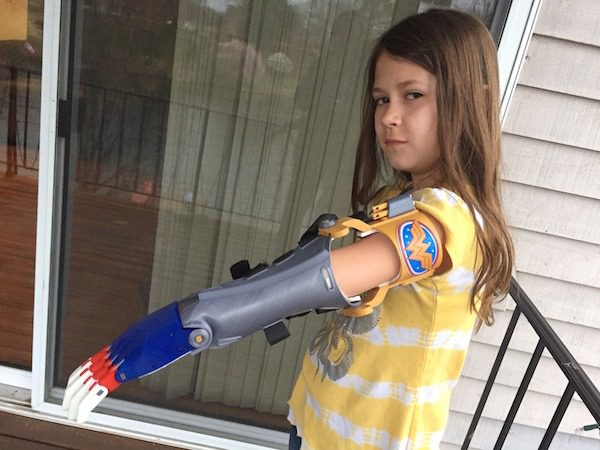 Today we’re here to share with you the latest on how our special friend Jordan, of Born Just Right, and the transformation of Jordan into Wonder Woman, thanks to the help of some extraordinary people and a dedicated team of adults. If you remember, we first shared the story of this true superhero last month as part of our coverage for the #FindingDoryEvent and her very special connection to Disney•Pixar’s Finding Nemo and their newest upcoming film Finding Dory which swims into theaters June 17. Over the years Finding Nemo has been universally applauded as a visually stunning underwater adventure, with memorable characters, humor and heartfelt emotion but for many families, Finding Nemo portrayed the story of the little fish that could do anything and be anything and thanks to his lucky fin, was gifted with courage and determination to find the possibilities in his life. Finally here was a story that touched their own hearts and souls in ways never expected-here was a story that they could live and emulate in their own lives as they found their way in a world of possibilities, and Jordan is once again demonstrating that no matter what your circumstances happen to be, it is a world full of possibilities just waiting to be discovered. As you might remember, The Born Just Right community is a stunning group of people. They are from all parts of the world each with some type of touchpoint in the special needs world – especially limb differences. Together they have been able to peek into some amazing developments: From brain research on limb different adults to the growing evolution of the 3D printing world. It’s an amazing time where they all have a chance to be more involved in creating tools to add confidence and health. Earlier this year, Jordan had a chance to build her own sparkle bomb arm  (also known as “Project Unicorn”) and she continues to work on developing new versions of her vision. It really is possible to “body hack” by creating cool things that fit the body you have. One of the organizations moving this forward is a spin-off of the eNABLE open source community. Thanks to a big grant from Google, the Enable Community Foundation is not only developing new tools for kids and adults in the United States, it is also working to develop tools that can be produced easily in third world countries. Thanks to Born Just Right, Jordan’s inspirational mom Jen Reeves, who is also a superhero in her own right, has been able to spend time following these developments for the limb difference community, Jen had a chance to meet some of the original founders of the 3D printed prosthetic revolution when she attended the SXSW Interactive Festival in Austin, Texas and see first hand kids and adults learn more about how 3D printing can help inspire and encourage people with limb differences. But the best part was when she was able to bring home a very sweet surprise for Jordan. One of the Enable Community Foundation members had a new arm made and offered to give it to Jordan. And this arm is VERY cool. It may not fit her perfectly, but it really doesn’t matter. It’s something fun that no one else in her household or school can wear: A Wonder Woman arm! Get your tissues ready as you watch Jordan’s reaction:

Jordan is super excited. And empowered. If there’s one thing they’ve learned since Jordan had a chance to build her own 3D designs is there’s a sense of amazing strength and confidence that comes with learning how to build your own tools and toys. This new Wonder Woman arm may not fit just right or properly open and close because Jordan doesn’t have an elbow. But that doesn’t matter. She feels strong and ultimately that’s the most important thing of all. Since then,  Jordan had a chance to spend almost a week in San Francisco with KIDmob and Autodesk to build her vision of a superhero that shoots sparkles from her arm, she’s shown a new version of confidence in her ability to create. Jordan says her superhero’s name is “Girl Blaster.” but her original project will still retain the title of  “Project Unicorn.” Thanks to our partners from the Superhero Cyborg event in January, Jordan was matched with a design partner who also works at Autodesk. Almost every week, Jordan and Autodesk’s Sam Hobish have met via Google Hangout to talk about design goals and different types of builds that interest her. Recently, many of the kids involved in the Superhero Cyborg camp met up in San Francisco or over a computer to brainstorm and continue building the designs they’re working on. Jordan and Sam are teaming together to try to find a way to harness the little bit of movement Jordan has at the base of her arm to power a 3D printed arm. Jen herself said that it was fascinating to see what they can figure out but the best part was that there was a new prototype that was delivered right to her doorstep. An article came out in Fast Company actually featured our sweet Jordan and the commitment and the determination that happens when a team of adults all come together to help give Jordan, and others just like her a “helping hand.” Jordan and Sam are coming up with designs beyond a sparkle cannon. Jordan says that she thinks this experience has changed her life and becoming a Superhero Cyborg has sparked the maker inside of Jordan. She’s opened herself to a whole new world of possibilities for herself and any kid who wants to try to come up with a fun body hack. Because, hey, why not?

To find out more about Jordan’s journey and Jen, be sure to check out :

To read all about how Finding Dory and Finding Nemo changed the life of Jordan as well as countless others, check out the first part of her story here. When Dory suddenly remembers that she has a family out there who may be looking for her, the trio takes off on a life-changing adventure across the ocean to California’s prestigious Marine Life Institute, a rehabilitation center and aquarium. In an effort to find her mom (voice of Diane Keaton) and dad (voice of Eugene Levy), Dory enlists the help of three of the MLI’s most intriguing residents: Hank (voice of Ed O’Neill), a cantankerous octopus who frequently gives employees the slip; Bailey (voice of Ty Burrell), a beluga whale who is convinced his biological sonar skills are on the fritz; and Destiny (voice of Kaitlin Olson), a nearsighted whale shark. Deftly navigating the complex inner workings of the MLI, Dory and her friends discover the magic within their flaws, friendships and family.

Get in The Swim With Finding Dory: Stay tuned right here as we bring you more on Jordan’s journey and on April 25 for “Dory’s Story” where we share with you how Dory’s story came to be and how it was developed and taken from script to storyboards to screen in our interview with Co-Director Angus MacLane and Story Supervisor Max Brace.