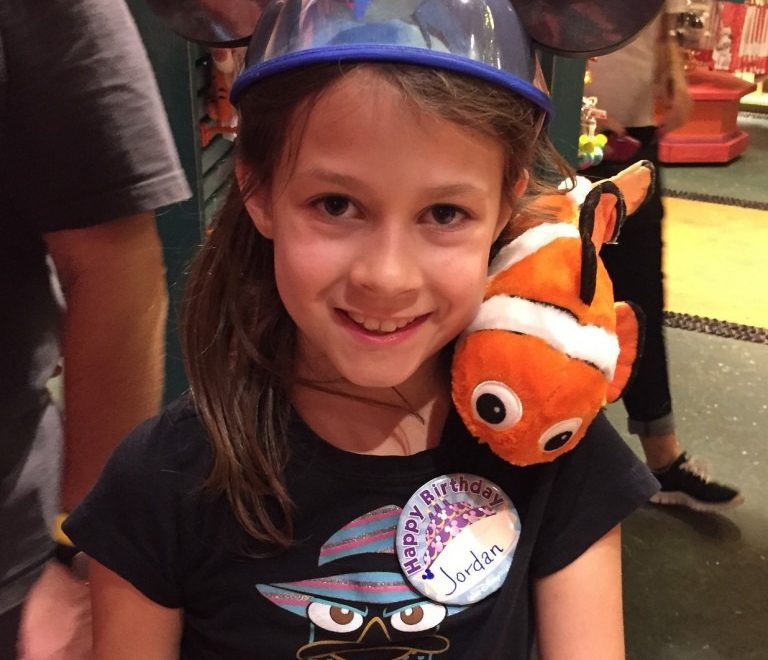 Long before there was Finding Dory, there was the tale of Finding Nemo, the perfect buddy movie about an adventurous young clownfish, Nemo, who is unexpectedly taken from his Great Barrier Reef home but thanks to the efforts of his sometimes over-protective father and everyone’s favorite amnesic blue tang, is safely returned home.  Over the years Finding Nemo has been universally applauded as a visually stunning underwater adventure, with memorable characters, humor and heartfelt emotion but for many families, Finding Nemo portrayed the story of the little fish that could do anything and be anything and thanks to his lucky fin, was gifted with courage and determination to find the possibilities in his life. Finally here was a story that touched their own hearts and souls in ways never expected-here was a story that they could live and emulate in their own lives as they found their way in a world of possibilities.

My friend Jen Reeves knows first hand what a powerful, positive impact the story of the little clownfish that could had on her own life and that of her daughter Jordan because like Nemo, Jordan is also blessed with a “lucky fin” thus giving her the tool to truly find herself and with the same spirit as Nemo, is going about finding all of the possibilities in her own life with a smile that would light up the universe.  As Jen puts it ” Every child is born just right.” Her site, Born Just Right, is a place where parents can come to share stories, read stories and feel safe as we all learn how to be parent advocates for our kids.

“It’s a wild ride that is best experienced when you lean on others and get the support you need.”

When I talked to Jen last week after finding out I would be a part of the #FindingNemoEvent  I wanted to know what this film meant to her, and to the hundreds of families that live this story in one way or another each and every day.

The movie is the next installment from Disney Pictures and Pixar about Dory, Nemo and their friends. We are beyond excited about a limb different fish making his return to the big screen!

The first Finding Nemo movie came out in 2003. Cameron was almost 14 months old, and we were focused on moving from Michigan to Missouri. But I made sure to see the movie. I was touched by the epic story and by the little fish who could do it all when he put his mind to it. Nemo’s “lucky fin” left a lasting mark on me. Flash to the end of March 2006 when I was returning to work and transitioning Jordan into daycare. I remember sitting in a circle with Cameron and his friends at preschool along with little baby Jordan as we talked about her limb difference. I remember quickly recalling Nemo as a way to help kids better understand how limb differences are a natural occurrence. Smaller children often have a harder time understanding a physical difference because they hadn’t seen it before. But then there’s a moment when they realized they have seen it in the form of Nemo. (Some adults have a hard time with it too. So, thank you, Nemo, for helping adults who may not understand physical differences as well.) We lost the ease of explaining limb differences with Nemo as Jordan and Cameron got older. The 3D re-release of the movie helped a bit. But Finding Dory is a real revival. Kids and adults of all ages will be reintroduced to Nemo and friends. I’m extremely excited. Our whole family is looking forward to the movie. Starting on Monday I’ll be swimming with the fishes for my birthday as we take you live to the Monterey Bay Aquarium where we will be joining 24 other swimmingly fabulous bloggers for the #FindingDoryEvent.  While we’re there we’ll be going behind the scenes to learn all about the research that went into the making of this latest adventures of everyone’s favorite fish Dory, which picks up six months after the first movie, with Dory (Ellen DeGeneres) living a quiet life among the clown fishes. After going with Nemo on a class trip to see manta rays migrate back home, her home sickness leads the forgetful Dory on a quest to find where she came from. But unlike the other media trips I’ve been so lucky to have been a part of with Disney, this trip will be just a little bit more special because in my heart, I’ll be smiling knowing I’m taking along the formidable spirit of Jen and Jordan Reeves, and the countless families just like her.   Thank you Jen for allowing me the honor of sharing Jordan’s story with the world. Jordan’s strength and energy toward encouraging all kids to be proud of who they are makes an impact on each and every one of us and with your help and encouragement, she is showing the world that she was indeed Born Just Right– “Size doesn’t matter. Impact does!”

To find out more about Jordan’s journey and Jen, be sure to check out :

Get Into The Swim of Finding Dory: And make sure to follow our special hashtag across social media.

It all begins Monday, March 7!  Grab your floaties and get ready for Finding Dory.