In The World Of Zootopia, Anyone Can Be Anything They Want 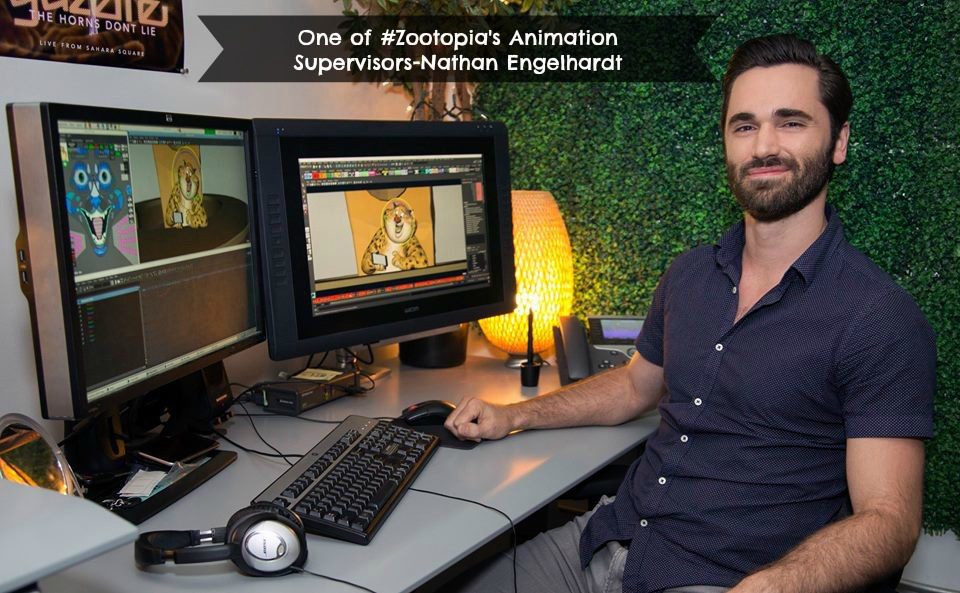 In the world of Zootopia, anyone can be anything they want!  Opening today, Zootopia brings to the silver screen a heartfelt story for the entire family that will make you laugh together, cry together but most importantly open the door to have conversations with your children.  It is classic Disney in what Disney does best – tell a story that appeals to everyone on many different levels and stays with you long after the movie credits have rolled. Last December, we were able to sit down for an exclusive interview with the team charged with creating the animated world of Disney’s Zootopia. Art Director of Characters Cory Loftis along with Head of Animation Renato dos Anjos and Animation Supervisors Nathan Engelhardt and Chad Sellers shared with us what it was like to merge animal and human behaviors together to create the unique and varied performances of the residents that would inhabit the six regions of Zootopia. The team faced such challenges as how to actually slow down the animation enough for a sloth, or how a giraffe would run if he were human, as well as the daunting task of keeping it all to scale where things were measured as “how many mice high” would this be when developing the anthropomorphic world that consisted of more than 1,000 unique animals of all shapes, sizes, stripes and spots that all call the world of Zootopia home.

The morning started with Cory giving us a hands-on drawing demonstration showing us step by step just how easy it was for us to create our very own bunny, and proving once again that I really have no artistic talent whatsoever which made me even more appreciative of those that do. One of the things that we learned from the team is that when you’re working on a movie full of people you figure out that people move a certain way and in turn you can apply the same or at least similar solutions to different characters. However with Zootopia, the challenge came when you found something that worked for a giraffe, you quickly discovered that it probably wasn’t going to work that well for mice or for an elephant. For every species of animal that they worked with, they needed to go into very deep research and figure out exactly what worked for each species. Normally, when you’re animating a movie, you get to know the characters a little quicker. This time around, every character that they got to work with was a different species, so there was a huge learning curve that they had to go through to get to know the character well.

The entire team got together very early with the first task at hand being to talk about and decide which animals would live in the city. A very early line-up of animals was created and then placed in that world to see what sort of problems these particular animals might have if the were to indeed actually live in a metropolis. The concept of scale was one of the first and ongoing obstacles that they needed to overcome. Early on the decision was made to try to keep to real-world scale with each of the animal inhabitants. That meant that if a mouse were to be living in the same world as a giraffe, to match the correct scale the giraffe would need to be 97 mice tall. Scale was also included in the designs of transportation, entrances, and homes of Zootopia. Once again, everyone seemed to come back to the fact that it was the extensive research that the team did before ever drawing anything. This translated into being able to accomplish the task of creating a world of animals who took on human traits, and taking animation to the next level. The group conveyed to us that on their research trips that took them from animal rescue shelters in Los Angeles to Disney’s Animal Kingdom in Orlando and all the way to Kenya, that they started by looking for as many things as they could to be able to understand that there are very specific behaviors that are very unique to an animal that’s different from what we do right on down to the way they will look at you or another animal. They noticed things such as that Cape buffalos for example really lock eyes on you and they stare at you possibly so that they’re really trying to make sure they know what’s happening when you’re near them. All of them agreed that because they were able to experience the animals in the wild and in person it made it much easier for them in turn to try to replicate that. They gave us the example that when you’re watching a movie, or you’re watching some footage of an elephant moving, it’s very different from when you see that same animal up close and know what it’s like to feel its presence. It was from those research trips that they really gained the insight they needed as to how the animal should look, as well as to give the audience that same feeling.

This also allowed the animators to ensure that the character maintained animal qualities all while paying careful attention to things such as elbows and shoulders to ensure they didn’t appear too human-like or, for example, using the elephant’s trunk to scoop ice cream because elephants don’t have hands. In addition they had to make sure that the characters were ones in which you could relate to when you watch the movie; you want to relate to their emotions and the situations that they’re going through. While they definitely used people’s perspectives for situations of how people react to certain things at the same time they were faced with the task of trying to avoid making them look too much like people. The way they move, the timing of their movement, and their expressions all had to be kept a little more natural to their species while at the same time keeping their overall emotion and the situations that they’re going through very similar to things that people would go through. In the end the team had fun playing with audience expectations and the entire team worked hard to make it a world that the audience could get lost in, looking at all the details and uniqueness and one where the audience could appreciate the richness and diversity of these characters. Another very real issue that the animators faced was the issue of clothing. The team didn’t want to just put any clothing onto the characters that would have the audience question how it was fitting and why it looked unnatural. Because many of these animals are bipedal, they are able to plant their two feet firmly on the ground and the team had to find the essence of the movement of these animals that were now walking on two legs. Through a long process, it came down to being a combination of human anatomy and animal anatomy that allowed the animators to have clothes that actually fit on the animals just as they would fit on a human. And if that weren’t enough, they had the job of assigning the right clothing for the right animal, keeping in mind all the shapes and sizes of the creatures that lived in Zootopia and making it seem as normal as possible. And if the issue of creating animals that looked normal when walking on two feet all while wearing the appropriate attire weren’t enough, the animators then had to tackle the issue of fur-because after all, in the end the residents of Zooptopia are animals, even though they are anthropomorphic ones. But as big as the challenges such as animals now walking on two feet, who wore clothing that needed to look natural over their fur were, the biggest challenge actually came from creating the scale for the movie and again making it realistic in every way. When it came to the world of Zootopia, both the environment and the characters had vastly different scales and would change relative to where they were in the city. An elephant’s restaurant had to be able to service a rabbit, for example which of course created a whole other set of challenges to be conquered. According to the team, the goal was always to ground the audience in a camera language they were used to viewing in modern live-action movies. The more they could make people feel that the world they were creating was real and not fantasy, the better.

Did You Know That… From concept to research to sketch to animation one thing that everyone we talked to fully agreed upon, the key to Disney movies, is the art of telling the story- and in the world of Zootopia, the story is truly the king of the jungle. Read more about our interview with Zootopia writer and co-Director Jared Bush, writer Phil Johnston, co-head of story Josie Trinidad, and head of editorial Fabienne Rawley when they took us on a story safari from script to story sketches to the editing room here. The journey behind the scenes of the making of Zootopia continues as 25 incredible bloggers from all over the country head to Animal Kingdom at the Walt Disney World Resort to continue where we left off including interviews with the cast and production team as well as taking an up close and personal look at the real animals that helped to inspire the world of Zootopia and more special surprises along the way.  Follow along beginning on February 20-23 by following their special #ZootopiaEvent hashtag across social media.