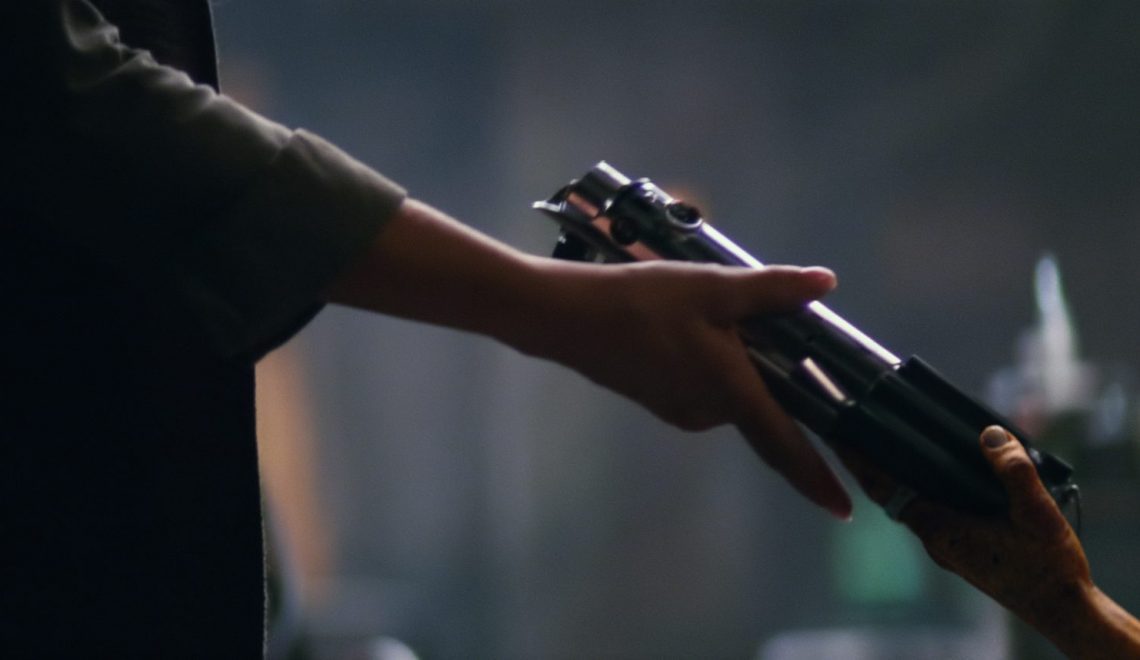 In 1977, an 11-year-old boy sat mesmerized in a darkened movie theater watching a film that would capture his imagination, his mind and a part of his soul. The movie was of course “Star Wars: “A New Hope”, a film that revolutionized movie making and taught us all the power of The Force. The 11-year-old boy was J.J. Abrams, who has been entrusted with the sacred duty of recapturing everything we came to know and love about the original series. This week, the self-professed super fan will once again take us to a galaxy far, far, away. In taking over the helm of the one mega-franchise that is the gold standard by which all other franchises are judged, a lesser writer/director might have been intimidated, but I truly believe that it is because of his love and unbridled passion for these movies that Star Wars: The Force Awakens is everything a fan would want in the continuation of the saga and then some. It will amaze, astonish and surprise you, but mostly it will feel like a trip back home. Some of the film has that comfortable and familiar feel to it, the same as if you were to get together with a dear friend that you hadn’t seen in ten years. But mark my words that Star Wars: The Force Awakens is not merely a reboot of the first 6 films.

Abrams manages to meld the joining of the same actors, writers, designers and even the same composer while bringing into the fold a new generation, a kind of passing of the torch if you will, to reanimate the characters and themes that made the original Star Wars, well, Star Wars. From the moment the opening scroll hits the screen and you hear the swell of the John William’s score begin to play you are acutely aware that you are in for the ride of your life in a familiar yet not so familiar way. You’ll once again be glued to the edge of your seat, with twists and turns around every corner as you are catapulted back into this galaxy that is far, far, away and a long time ago. If you’re looking for spoilers, you won’t find any here because to tell you or even hint at what unfolds would be to take away the most important factor of the film – the unexpected plot points that catch you totally off guard and make your mouth hit the floor. This is a movie that you need to experience for yourself and to totally give yourself over to. In the end it’s a journey you must make right along with the characters in the movie. I will tell you this-get your popcorn before the film starts because once the lights go down, it’s a non-stop roller coaster ride in the best tradition of the Saturday matinees of old and you won’t be moving from your seat.

So just what is it about Star Wars that sets it apart from any other film? Good vs. Evil: From as far back as the Greek tragedies, the classic conflicts of good vs. evil have been a part of who we are and translates to any audience. Never is that more apparent than in the Star Wars sagas. Whether it is the classic clash of battles of the Dark Side vs. the Light Side, Darth Vader vs. Luke Skywalker, Stormtroopers vs. Jedi or the newest clash of the Resistance vs. the First Order, it’s a formula that works, and one that leaves us cheering and wanting more.

Strong Female Characters– Star Wars was one of the first movies that involved multiple female characters that evoked power and had the potential for greatness and that legacy continues. From Princess Leia, now General Leia to Padme Amidala to Rey, Star Wars has made it not only acceptable, but also normal to have females in positions of power on the “good” side. Rather than the typical strong female character cast in the role of villain, strong females hold their place, as some of the most loyal and intelligent characters the films have to offer. Darth Vader and Yoda may seem strong, but in the end, it is indeed the females that wield the power. Friendships– Friendships in cinema are always a plus, and bromances are even better. So what do you get when you combine Harrison Ford and a Wookie or BB8 and R2D2? That’s right: brilliance. With humor and heart, it is the unlikeliest of duos that come to encompass and define the true meaning of friendship. Admit it, you got a little teary-eyed at that end of the trailer for Star Wars: The Force Awakens when suddenly Han Solo and Chewie appeared at the end and Han uttered those immortal words “ Chewie we’re home”

Special Effects – Today we are so used to computers, CGI, green screen and a host of others that people forget it was Star Wars that opened the door and introduced us to a new breed of special effects the likes of which we had never seen before. Many people aren’t familiar with the amount of work that went into the special effects of these beloved films. Setting a film completely in space makes filming difficult, but George Lucas tackled this task with ingenuity and J.J. Abrams made the conscious decision early on to keep the use of CGI to a minimum, thus helping to keep the flavor and continuity of the earlier films. Back in 1977 these special effects were so unlike anything we had ever seen before that they set the bar for films to come. And now almost 40 years later, they still hold their own.

BB8 – “They never cease to amaze me with what they’re able to come up with, you know? I said, ‘How are you ever goanna top R2-D2, the most adorable droid in movie history?'”―Mark Hamill on BB-8.  Get ready, because this is the droid you are looking for. BB8 will roll into your hearts and you’ll be enamored forever more. If there’s a scene-stealer to be had, if there’s one character you won’t be able to get enough of, it’s the one and only astromech droid BB8. The Music– Without John Williams, Star Wars, and movie history would be written in an entirely different way. Williams’ score is more than just a part of the film — it is its essence, the blueprint on which whole subsequent genres of film have been built and the thing you bring home with you as you hum the bars over and over again. Even many years later, the moment you hear the music played, the floodgates of emotions open as it is those same notes, the ones you first heard in 1977 and that is the constant that connects the generations. From the first moment of Star Wars: The Force Awakens, it is in part John Williams’ score that is such an integral part of the telling of this story. Ensemble Casting At Its Best- When you’re asked to name an all time great ensemble movie, Star Wars probably isn’t the first one that comes to mind but when you stop to think about it with Wookies, Ewoks and Stormtroopers galore, the cast of Star Wars, even though they are for the most part not quite human, is truly the quintessential ensemble in every sense of the word that keeps us coming back for more. Add in Yoda, C-3PO, R2-D2 with a pinch of Jabba the Hutt, Watto, BB8, Captain Phasma, and Maz Kanata and you have all the ingredients for the best that ensemble casting has to offer. Whether Star Wars first came into your life a long, long time ago, or you’re being introduced to it for the first time or handing it down to the next generation, one thing is certain. Star Wars: The Force Awakens is indeed the movie we’ve waited for, and once you see it, you too will know why it was worth the wait. Thank you J.J. Abrams for being that 11-year boy who grew to be the person who once again proves that the Force is here and is still strong.