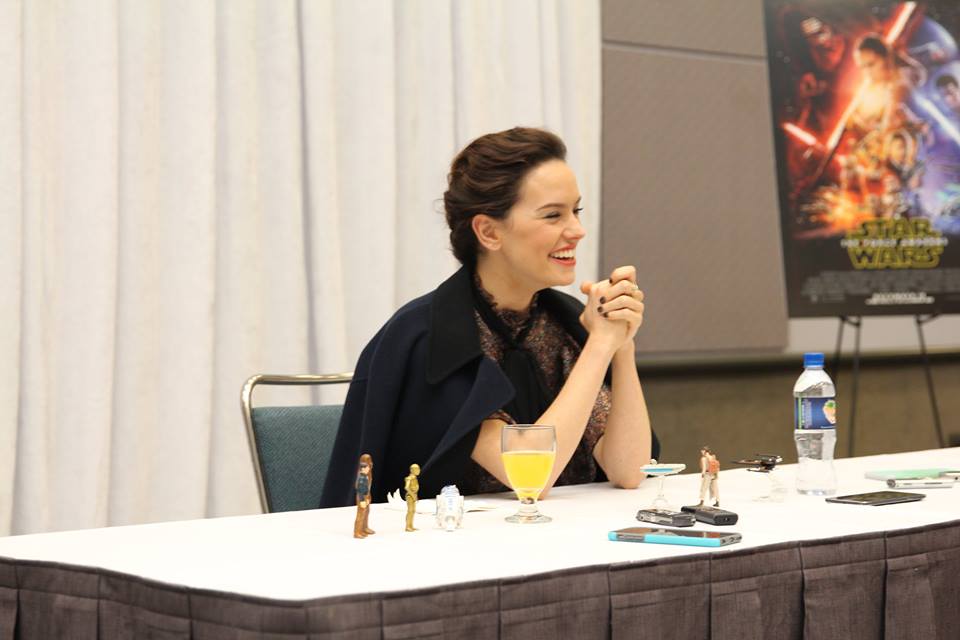 A few years ago, Daisy Ridley was just a student at Tring Park School for the Performing Arts. By her own admission she was sent there initially because, “I was very naughty, and my mom thought if I was busy, I’d be better.” She didn’t really try acting until later on in the school. Instead she left, went traveling, came back and then, with an amazing teacher, tried acting. “And then it all kind of went from there.” With a warm and welcoming smile that lights up a room, Ridley shows an ease and confidence not often seen in most 23 year olds, much less ones who are about to have their lives travel through the hyperspace of fame at speeds the Millennium Falcon would strain to reach with the opening of Star Wars: The Force Awakens this week. Before Force Awakens director J.J. Abrams cast her as Rey — a desert scavenger from the planet Jakku who’s been fending for herself since childhood — Ridley’s résumé consisted of a few bit parts on British television. And this week she will find herself portraying, according to Kathleen Kennedy, the new generation’s Luke Skywalker. We sat down to talk to this warm and engaging actress about her role of Rey, which is not just the role of a lifetime, but her very first movie role ever. “It’s definitely the most nervous I’ve ever been for an audition. And I was there an hour early, so I went to, like, sit in a coffee shop, and then I still got there half an hour early. I mean I must have gone for a wee a million times. Then I’m pretty sure they told me to go away and come back. I was just really, really nervous. It felt like a huge deal. And it’s funny, because Star Wars was not that huge in my life growing up at all. The whole way through, even though I was riddled with doubts and I felt like I wasn’t doing a good job in the auditions and that I was over thinking everything but it was great. Obviously it was just over in a flash. You put so much pressure on yourself when you think about it so much. Even before I started auditioning two of my friends had said something about it and I thought to myself that I’ve got a really weird sense. It sounds cliché, not destiny but a sense of something that was going to come from it. I already had that in my mind and that was kind of pushing me forward. But because of that, I was obviously putting a great deal of pressure on myself. I didn’t really enjoy the audition process and I felt like I was kind of screwing up. Luckily J.J. obviously saw something and then in my last audition I really felt like I did a good job. And I was really pleased. I obviously still wanted the role but I thought even if I don’t, I’m really glad that I’ve shown him really what I can do. And then luckily I got the role. So that was a good ending.” “No, for mine I didn’t. I was cast slightly before John was. J.J and I had a conversation about it and I knew all of the actors that were going to be in it or that he wanted to be in it and in the end, all of those actors did indeed end up being in the movie. I tested with John and it was nerve wracking because obviously I had been told I had the role but that was still a huge pressure for me but John wasn’t allowed to know that I had gotten the role. So now he’s like, “Oh you lied to me”. Then the time came when we put on the costumes for the first time and we stepped on a set and Chewbacca was there. I thought ‘Oh my gosh this is crazy.’ It was so nerve wracking but also wonderful. And from the moment I met John, I was like, ‘Oh my gosh.’   When J.J. called me to tell me it was him, I was so pleased.”

Kathleen Kennedy referred to the character of Rey as the new generation’s Luke Skywalker. How do you feel about that and what do you think the girls coming up in this generation that are going to see the film maybe for the first time will think? “Well it’s weird. Because I wasn’t really thinking about myself in those terms when I was doing it, because I think that might have been slightly overwhelming. But now I can kind of see all of them in her. She’s a pilot so there’s Han. And she’s a kick-ass woman, so there’s Leia. She definitely has the humble beginnings and her incredible story is the same as Luke. Obviously it’s very exciting that I’m a girl and that more people hopefully will be able to relate to this story because of that. Perhaps people that haven’t been able to relate so much to a character before will now be able to. I wasn’t a huge Star Wars fan before so I’m hoping that with the fact that I’m as excited as I am, I hope that other people can feel that and perhaps feel like this is something that they can now come on board to if they haven’t already felt that.”

What characteristics of Rey do you see in yourself? “I see a lot of myself in her because it’s me playing her. I think she is quite like myself as a person. I think everyone can be hard on themselves but I think all too often people are far too hard on themselves and it’s not celebrated enough that people can actually enjoy themselves but all of the qualities I think maybe I possess in small things I think Rey has in greater amounts. I like to think I’m kind of brave but she’s far braver. I like to think I try and do the right thing but she far exceeds that. So I think not polished and she’s not- she’s nuanced and I think that’s why she’s so brilliant and so relatable. But she’s far more of anything I think I could ever be. I guess because of her circumstances and the fact that she’s not real, I don’t know but she’s brave and- and honest and open. She’s open to everything that’s going around her, even though it scares her, even though, it makes her feel like she wants to run. She kind of plows on, so I hope I have those qualities.”

You play a very strong female lead in the movie. So do you have a good takeaway for young girls? “I think I’ve been very lucky in my life to be able to look up to incredible women. My mom and I have an amazing relationship and she is really an amazing woman as is my Gram. My mom has a group of friends who we kind of grew up with. I don’t really have very many close family members so they formed ours. I remember when I was auditioning, I met Kathy and I didn’t really understand who she was at that point. That’s obviously embarrassing now. She asked me who I looked up to and I remember talking about them and now I look at Kathy and think she’s another woman I look up to. It’s funny because the women I look up to are older, they’re wiser and they have far more life experience. But Rey in her way has lived a life and she has wisdom probably beyond her years. The thought of girls being able to relate to a character in a film where perhaps girls can’t find in films so much of what they can physically like see themselves in. They can’t follow a story sometimes if there’s nothing that’s representing them in the film so to be part of that is incredible. I’m just an actress; I’m not changing the world. But to be part of something that is perhaps groundbreaking and to be part of like a movement of women, not just in film, all over the world and all different sectors -that is an incredible thing.”

Are there other characters or female roles in the movies that you thought about when playing Rey? “Well it’s weird because I kind of said this the other day. And I didn’t articulate it very well. Matilda is my favorite film and although the stories are different but, they’re both in a place that isn’t fulfilling and that isn’t emotionally giving you what you need. Not being appreciated Matilda’s obviously in a family that doesn’t do that to her and Rey has no one but to go on a journey of self-discovery and push yourself beyond limits and meet people who bring the best out of you, I can definitely see those parallels.”

What did it feel like to step into a role where the franchise spans across generations and will continue to do so?

“I’m glad I kind of didn’t know how far it reached. It was really only at the convention this year, the first convention we did, that it hit me that there are a lot of people here and everyone is here for the same reason. I think that would have been quite overwhelming if I had been dealing with that while also dealing with the fact that I’m just a young girl being thrust into this thing and I don’t quite know why I’m here and all that kind of stuff. I was already dealing with that so I’m glad that I wasn’t dealing with the rest of the stuff. Even during it, sometimes I was thinking this is really cool. But everyone would be so obviously affected by this thing and obviously it sweeps you along with it. I was always kind of more like it’s nice for me that I don’t have that sense and I still enjoy it as I do, because I think not everyone is a super fan. To be a representative of those other people is great.”

Finally if you had a light saber, what color would it be? Two years ago Daisy Ridley was an actress just starting out with a résumé that consisted of a few bit parts on British television. This week her first movie part just happens to be a role that will blast her into the universe and as part of this cultural phenomenon known as Star Wars and will live on for generations to come. Ridley is still wrapping her head around her career’s jump to light-speed but after meeting her and getting to know her, no one could be more perfect for this and all that’s to come than she is. What secrets did Harrison Ford reveal? Find out that and much more in our exclusive interview with him. Want to know what it was like to be a part of the top secret Star War Global Press Day? Read all about the experience here.

Who’s sitting down for a interview next? Come back tomorrow and we share what it was like to sit down with the bigger than life personality of John Boyega. There’s Been An Awakening… 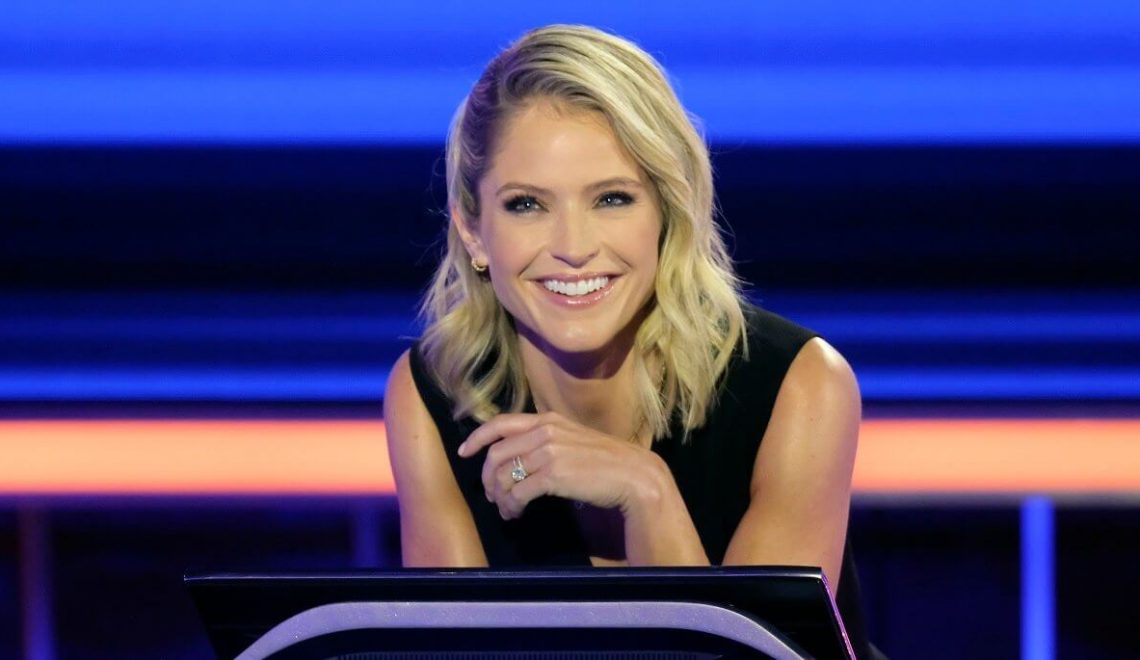