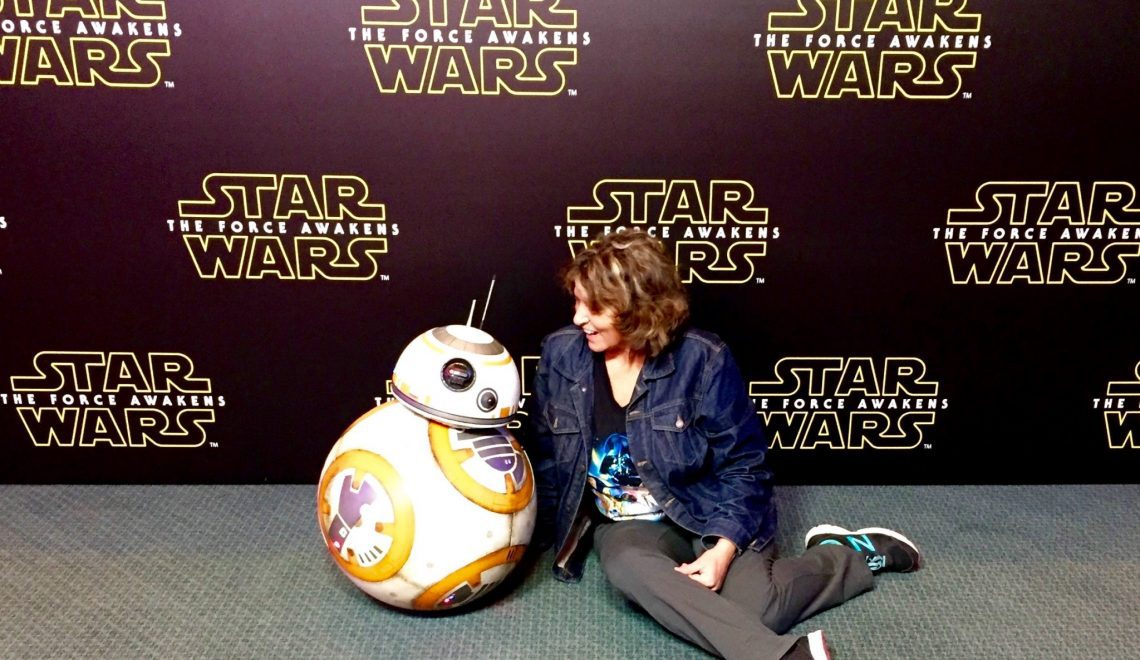 So just how does one make the hyperspace jump from 1977 to the super top secret Star Wars Press Day? Back in 1977 I was just like thousands of others from across the nation, and yes I slept overnight in line to be the first to see a brand new film that would change all of our lives and the way we would look at movies from that point on. The movie of course was Star Wars. Back then it wasn’t called A New Hope or even Star Wars: Episode IV- A New Hope– it was just plain, old Star Wars. And if you lived in Northern California, it was the movie created by one of our own who lived right down the road, George Lucas, and one that many of us had been a part of in one way or another.

Never, would it ever occur to me that 38 ½ years later, that not only would this thing known as Star Wars, be something that would still be touching lives in every corner of the world, but that I would be standing in the midst of the Global Press Day for the next installment in the tale that had spanned all of my adult life- Episode VII Star Wars: The Force Awakens. But last Sunday there I was in the midst of it all and even looking back on it I still don’t think I’ve begun to process it all, or really know how this movie franchise has impacted my life in so many ways until I found myself posing with BB8 and C3PO and R2D2, and later that day interviewing the likes of Han Solo himself, Harrison Ford or director J.J. Abrams and Kathleen Kennedy who epitomizes what the power of self belief is all about or listening to Carrie Fisher be, well Carrie Fisher.

So just what is it like to be a part of the super top secret Star Wars Press Day? From the moment you entered the arena, you had to declare your allegiance to the Light Side or the Dark Side right from the start- and it was Dark Side all the way for me.

Hour of Code: As an educator I’ve used Hour of Code to help take the mystery out of coding for my students and equip them with the coding skills needed to be able to be successful in the future. This year students of all ages from kindergarten to high school can join in even before they see the new Star Wars movie, and team up with Princess Leia to build a game during the Hour of Code. The global event aims to expose students to computer science and coding basics. “The purpose of ​it is to demystify computer science and coding and show that all students – no matter their background, age, race, gender – can understand and appreciate coding and computer science,” says Pat Yongpradit, chief academic officer of Code.org. Plus any time you can make learning fun-you have their full and undivided attention. Go to https://code.org/starwars to try it for yourself.

We were able to try out the Disney Infinity 3.0 Edition which allows you to take on epic heroic abilities, earn upgradable skills and use Lightsaber™-wielding abilities for all your characters in the Toy Box and came away with our own Kylo Ren character.

Google Awaken The Force Within:

In an unprecedented collaboration with Google, Star Wars fans have an opportunity to share in immersive experiences — Awaken the Force Within and Google Cardboard Virtual Reality — in celebration of Lucasfilm’s Star Wars: The Force Awakens. Awaken the Force Within, a global program allows fans to log onto Google.com/starwars where they can make a choice to be on the dark side or the light side for the upcoming Star Wars: The Force Awakens. Your favorite Google apps will then transform to reflect the path they choose. Special experiences have also been developed for Android Wear Watches, Google Calendar, Chrome, Chromecast, Gmail, Google Maps, Google Now, Waze, and YouTube with added features for fans to discover on their Inbox by Gmail, Google Translate, and Google Search. Which path will you choose?

Merchandise: From apparel to shoes, to jewelry, to accessories to figurines, to toys to collectibles and everything in between, we were given the first look at the galaxy of products that will soon be a part of every home.

Limited Edition Star Wars Ice Cream: Yes, you read it right-Star Wars ice cream and having sampled both more than once, both flavors will launch your taste buds into a galaxy far, far away. Conceived in collaboration with Disney Consumer Products, packaged in collectible containers with original artwork, this 4-Pack set is the perfect gift for any fan or ice cream lover! Each 4-Pack includes two pints of each flavor:

Memorabilia: What Global Press Day would be complete without an up close and personal look at props and costumes from the movies themselves. From Storm Troopers to the costume worn by Han Solo it was all there including some looks from the upcoming film.

Meet The Cast: Where else would you find yourself face-to-face and posing for pictures with R2D2, C3P0 and BB8? Nowhere! Plus if that weren’t enough, a fun green screen photo experience was set up depending on whether you had chosen to be a part of the Light Side or the Dark Side. Global Press Day: Hosted by Mindy Kaling, The Star Wars: The Force Awakens global press event had enough stars to light the universe with most of the main cast (with the exception of Mark Hamill) on hand to talk about their experiences making the film, while also revealing one or two interesting hints of things to come.

Highlights included Adam Driver discussing his character Kylo Ren and suggesting that he may not actually be a full-on villain, Gwendoline Christie hinting that Captain Phasma will return in future movies, producer Kathleen Kennedy revealing whether or not we’ll see Jar Jar Binks and the Ewoks again (we won’t), and Carrie Fisher being her irrepressible self.

Disneyland: So how does one top a day like that? By heading to the Happiest Place of Earth, the Disneyland Resort to experience the brand new Star Wars Season of the Force and Launch Bay for ourselves.

Here you are able to transport yourself into another galaxy where epic encounters, alluring attractions and culinary adventures await. The Launch Bay allows you to check out replica movie props, play games, snap photos, screen exclusive videos and encounter Star Wars heroes and villains. The newly redesigned Star Tours ride now features only two scenes instead of three. Finn, a character in the “The Force Awakens,” replaces C-3PO as the guide Space Mountain. Space Mountain makes the leap to hyperspace as Star Wars invades the classic high-speed, outer space adventure. New Galactic Grill foods influenced by the dark side include the First Order Specialty Burger, a Darth Vader chocolate parfait, and a red and black éclair decorated as sith lord Darth Maul. The counterpart to the “evil forces“ burger is the Jedi Order Chicken Sandwich and of course drinks are served in Chewie Steins or your very own BB8 sippie cup. And our And the timing couldn’t have been more perfect because we were able to experience the #DisneylandHolidays for ourselves. Snow on Main Street-you bet!

And next week, the wait is over

“There Has Been An Awakening…” Stay tuned tomorrow when the empty chair in the picture is filled by the one and only Han Solo himself, the incomparable Harrison Ford as he shared secrets from the set during our one on one interview and revealed what being a part of the franchise that changed his life over the last 40 year means to us. It’s all right here on Friday.

Disclosure: I have been invited by Disney to cover this media event. All material and expenses for this event have been provided courtesy of Walt Disney Studios but all opinions my own.
#Entertainment#Movies#StarWarsEventInterviewsLucasfilmsMemorabilliaMerchandiseStar Wars Global Press DayStar Wars: The Force AwakensWalt DIsney Studios
Share